We may be in the midst of the most unpredictable year in all of human history.

And yet, here we are, making guesses on football games.

Before UW kicks off its conference-only, seven-game season at Cal on Saturday, here are five bold predictions to argue about with friends and family. 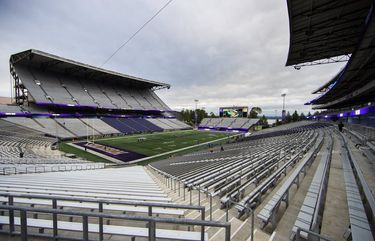 Washington’s defense will lead the Pac-12 in interceptions.

So, historically, this prediction might be a little bit bolder than you think.

And my reasoning for this stance is not entirely tied to Oregon’s secondary being somewhat decimated by opt-outs, or Utah’s secondary standouts departing for the NFL (though both are true).

Rather, just look at who the Huskies are bringing back. There’s senior nickelback Elijah Molden, who led UW with four picks in 2019. And sophomore corner Trent McDuffie, who should improve on a phenomenal freshman season. And senior corner Keith Taylor, who has yet to nab his first career interception (and is unquestionably overdue). And ascending safeties Asa Turner and Cameron Williams. And elite athlete Kyler Gordon. And possible wild card Julius Irvin. And Dominique Hampton, and Brandon McKinney, and on and on and on.

With that depth of personnel, it’s fair to expect 9-10 interceptions in a shortened season.

Ty Jones will lead the Huskies in touchdown catches.

How quickly we forget.

In 2018, a sophomore wide receiver named Ty Jones led a relatively listless UW passing attack with six receiving touchdowns. He contributed 31 catches, 491 receiving yards and 15.8 yards per reception as well. He then missed most of the following season because of a wrist/hand injury, using a redshirt while failing to catch a pass in four games.

Given his injury-abated no-show in 2019, plus changes at coach and offensive coordinator (as well as the arrival of a global pandemic), it might feel like Jones last found the end zone in 1991. But the 6-foot-4, 200-pound redshirt junior has returned to the rotation both healthy and motivated, and he’ll lead the Huskies in touchdown catches again in 2020.

That’s right. Not Puka Nacua or Cade Otton or Terrell Bynum or Rome Odunze or Jalen McMillan or Marquis Spiker. Not any of the considerably flashier options on the list.

It’s easy to fall in love with new and disregard dependable. But in a shortened season, Jones is much more of a sure thing.

Kyler Gordon will be a starter by season’s end.

I don’t know how it’s going to happen. I don’t know if the 6-foot, 195-pound redshirt sophomore will supplant senior corner Keith Taylor, or maybe slide back and assume a starting safety spot. I don’t know if an injury to an established starter will thrust Gordon into the spotlight. I don’t know if Pac-12 leadership, following a night of heavy drinking, will amend its rules to allow a 12th defensive player onto the field at any given time.

I know that Gordon is too good, too athletic, too intriguing, to spend fall Saturdays sitting on the sideline.

Granted, he didn’t always show that last season. The Archbishop Murphy alum started the first three games and committed some damaging penalties before being permanently replaced by freshman Trent McDuffie. He also rebounded to make 32 tackles with four passes defended in 13 games, earning All-Pac-12 honorable-mention status despite the limited reps.

Gordon’s athleticism is well established. In the team’s annual combine last spring, he led the Huskies with a 42.5-inch vertical jump.

And, on the field, he might be ready to make the leap.

It’s tempting to expect a new scheme to solve all your problems.

Why? Because it’s going to be “multiple” and “aggressive” and other “buzz words.” And because, didn’t you see what Joe Brady did at LSU?

But at Washington, at least, it won’t be that easy.

This is still a team forced to replace three starting offensive linemen — a center and both tackles. It’s still a squad that has seemed unable to narrow its four-man quarterback competition, which is probably not a byproduct of all four options playing so gosh darn well. It’s still a young group learning a new scheme in the most unusual offseason anyone has encountered.

Plus, even if UW’s offense executes to perfection, this is still a pro-style scheme predicated heavily on a downhill running game. And don’t forget that UW’s starting quarterback — whoever he is — will be asked to complete passes in Seattle and Eugene and Pullman in November and December, in more consistently uncomfortable weather than maybe ever before.

This fall (and winter), there might be mild improvement. But don’t expect first-year offensive coordinator John Donovan to wave a magic wand at Washington.

OK, so some predictions are bolder than others.

UW’s three home games this season come against Oregon State, Arizona and Stanford — and Washington has won a combined 10 consecutive home games against those opponents. Arizona also received the fewest votes of any team in the Pac-12 preseason media poll, while Stanford and Oregon State were picked to finish fourth and fifth in the North Division, respectively.

But this prediction could eventually be bolder than originally intended. Should UW go undefeated, or maybe even finish 5-1, there’s a decent chance the Huskies would host the Pac-12 Championship Game in Seattle.

And, given that stipulation, am I essentially guaranteeing victory in the title game as well?