The Washington Huskies are 1-0.

But if you were searching for style points, you came to the wrong place.

Before UW turns its eyes to Arizona, let’s (mercifully) close the book on a sloppy 27-21 victory over Oregon State. 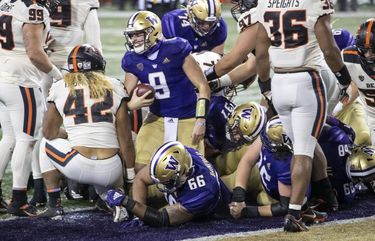 Sean McGrew led the Huskies in both rushing yards (91) and yards per carry (10.1) Saturday, ripping off runs of 27 and 21 yards in the first half.

And yet, the 5-foot-7, 175-pound senior received just three carries in the third quarter and zero in the fourth.

Instead, redshirt sophomore Richard Newton — who finished with 15 carries (six more than McGrew) for 41 yards and 2.7 yards per rush — received the lion’s share of the work in the fourth quarter, carrying eight times for 26 yards. In fact, outside of one run for no gain by fifth-year senior Kamari Pleasant, Newton was the only Husky tailback to touch the ball in his team’s 15-play, 52-yard slog that resulted in a 23-yard Peyton Henry field goal with 1:45 left.

It’s true, the final numbers — 267 rushing yards, 5.2 yards per carry, three rushing touchdowns — are undeniably impressive. And theoretically, Newton — arguably UW’s most physical back, at 6 feet and 210 pounds — is ideally suited to pummel an opponent in the fourth quarter when it is supposedly wearing down.

But why wasn’t McGrew — UW’s most effective tailback Saturday by any definition — more involved in the second half?

“All three of those guys give you different things,” UW head coach Jimmy Lake said late Saturday, when asked that question via Zoom. “So we just try to play to those guys’ strengths and keep them fresh. Running the ball is a physical thing and those guys get worn down very quick. We obviously had a bunch of rushing attempts, so we wanted to just keep rolodexing those guys in there so a fresh running back was hitting that defense that started to wear down a little bit.

“I think you guys saw that in the fourth quarter. They were definitely wearing down.”

Were they, though? Consider that, in the first half, UW rushed for 160 yards and 6.7 yards per carry, and scored 24 points. In the second half, the Huskies managed 107 rushing yards, 4 yards per carry and three points (with Peyton Henry also missing a 28-yard chip shot of a field goal). They averaged 8.1 yards per carry in the first quarter and 3.9 in the fourth.

In truth, the Husky running attack grew less effective as the game wore on — and McGrew, the hot hand, might have made more of an impact.

Don’t expect Lake to apologize for his style of play.

Against Oregon State, it was methodical. It was plodding. And redshirt freshman quarterback Dylan Morris — who bested three others to win the Huskies’ starting spot — was given precious little to do.

When asked why Morris was the man for the job, Lake immediately mentioned his proclivity for avoiding mistakes. And, from that standpoint alone, it helped that UW took about as many vertical shots as an option offense.

On Saturday, Lake said the Huskies “are going to do whatever we need to do to win football games.” And eventually — whether that’s against Arizona, or Washington State, or Stanford, or Oregon — offensive coordinator John Donovan and Co. will need to prove they can push the ball downfield.

It’s not that Morris struggled, per se. He completed 14 of 24 passes for 141 yards, and ran for 21 more. He made good decisions and was relatively accurate in a rainstorm, and wide receivers Ty Jones and Rome Odunze both dropped would-be touchdowns. The redshirt freshman quarterback certainly is capable of improving and gaining confidence, and he has the arm strength to beat defenses vertically as well.

But will Lake and Donovan ever let him?

One way or another, we’re about to find out.

We knew it would be difficult for UW to replace defensive lineman Levi Onwuzurike and outside linebacker Joe Tryon — both of whom declared for the 2021 NFL draft.

But this coincidence was almost too much to overcome.

Saturday, UW defensive lineman Tuli Letuligasenoa and outside linebacker Laiatu Latu — Onwuzurike and Tryon’s direct replacements at each spot — both sat out with what appears to be unspecified injuries. Lake declined to provide updates on either, but said he will address injury issues Monday.

And, likely as a result of UW’s fledgling depth, Oregon State ran for 167 yards, 4.9 yards per carry and two touchdowns. A week after he compiled 170 yards against Washington State, 217-pound junior Jermar Jefferson terrorized the Huskies for 133 rushing yards, 5.8 yards per carry and a score. UW defensive linemen were credited for a total of four tackles and zero tackles for loss.

On the outside, 280-pound redshirt sophomore Zion Tupuola-Fetui was a certified menace — racking up four tackles and two strip sacks. But UW depending on a pair of true freshman outside linebackers — Sav’ell Smalls and Cooper McDonald, who combined for one tackle — should be a legitimate worry for Washington football fans.

The Husky secondary sparkled Saturday, per usual. But if Letuligasenoa and Latu miss significant time, that’ll likely spell trouble for the UW defense.

When asked in fall camp what he’s capable of in the return game, sophomore cornerback Trent McDuffie smiled and said, “You guys are just going to have to see that one for yourselves on game day.”

Now we know why he was smiling.

The 5-foot-11, 195-pound standout — who already was one of the best young cornerbacks in the country — ripped off a 45-yard punt return Saturday, gashing the Beavers up the gut with an exemplary burst.

And in his first career start, senior punter Race Porter also should be commended. He leapt to snag a high snap and avoid another special-teams disaster, and later dropped a 42-yard, fourth-quarter punt on the Beavers’ 1-yard line.

The special-teams mistakes Saturday — an errant snap, a blocked punt returned for a touchdown, a missed 28-yard field goal and kickoff returns allowed of 42 and 43 yards — could have cost the Huskies the game. But there also was a few positives peeking out of the filth.