The University of Washington football team’s first depth chart of the season is usually sprinkled with a few surprises.

Monday’s edition did not disappoint.

Five days before Washington kicks off its 2021 campaign against Montana, let’s sift through the unexpected starters and lingering questions at several key spots. 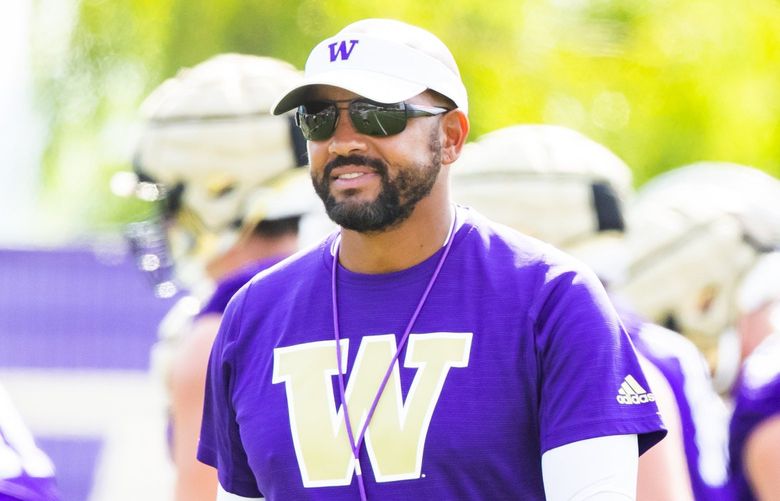 But Monday, both were listed as starters — with sophomore Julius Irvin unsurprisingly nabbing another safety spot.

Still, on a depth chart that lists only “defensive backs” — declining to specify individual positions — it’s unclear which position Radley-Hiles and Fabiculanan actually will play.

“We’ll see on Saturday,” UW coach Jimmy Lake said with a grin when asked if Fabiculanan will settle at nickel, leaving the safety spot to Radley-Hiles.

It’s worth noting that Radley-Hiles — a former three-year starter at Oklahoma — began his college career as a safety before eventually shifting to nickel. And considering the 6-foot-1, 190-pound Fabiculanan’s strong spring and summer, it’s not shocking that the Husky coaches eventually opted to let both simultaneously see the field.

“We’ve been able to trust him with the calls,” Lake said of Fabiculanan. “He’s been in the right position. He’s tackled well. He’s been where he’s supposed to be, made plays on the football. He’s been here now for a couple years, and it’s been fun to watch his progression, and now we’re excited for him to go out there and get his first start.”

Analysis: The only surprise here is that the freshman Huard — a former five-star recruit from Kennedy Catholic — is listed.

Throughout much of spring practices as well as fall camp, graduate transfer Patrick O’Brien was the clear backup behind second-year starter Dylan Morris. But an O’Brien hand injury late in camp might push Huard into the backup role against Montana on Saturday.

And, with that said, Lake was asked how confident he would be if (unexpectedly) Huard is tasked with running the Huskies’ offense in his first career game.

“I think he’s put in the preparation,” Lake said. “He’s made a bunch of plays here in training camp. You guys saw it. He even took more of a step in this last week and a half. He took a bunch of reps. My confidence level would be high.

“This time last year guys we had Dylan Morris, who never played a college-football game. I’m going to keep saying that over and over. I just want to remind you guys. We had a starting quarterback who never played college football before. (Offensive coordinator John Donovan) and the crew did a really nice job of making him operate and making him successful. So my confidence level would be extremely high if Sam Huard was in there. I know we would prepare him. We wouldn’t put him in adverse situations, and we would lean on our strengths as an offense and make sure we’re getting plays to him where he can be successful.”

Analysis: For the near entirety of open offseason practices, Terrell Bynum, Rome Odunze and Jalen McMillan were cemented as starting wide receivers. But McMillan — a 6-1, 180-pound second-year freshman — suffered a hand injury that required surgery Aug. 16, and it’s unlikely he’ll play against Montana.

“I am so proud of that young man. He has put so much work in,” Lake said Monday. “I don’t know, it might go back and forth who’s first in the building, either Eddy (Edefuan Ulofoshio) or Ja’Lynn Polk. He is here first thing in the morning, and he is just ready to grind, ready to learn, ready to watch his reps from the day before. (He’s always asking) how can he get better? What’s the install in for the day?

“What I love about him is the mentality that he brings every single day to practice. He’s tough. He goes up, and he makes the tough catches with DBs draped all over him, grabbing him, pulling his jersey off, and he still makes those catches. He knows who to block in the run game. I told him the other day, with his mentality, he could play DB for us. He really could. He could play safety, he could pay nickel, he could play corner. And I want all of our receivers to be that way.”

Analysis: Sixth-year senior Ryan Bowman was a lock to start at outside linebacker.

But elsewhere at that position, Cooper McDonald, Bralen Trice, Jeremiah Martin and Sav’ell Smalls have all been angling for playing time. And though Lake has been positively bullish on the 6-4, 245-pound McDonald since he arrived on Montlake last summer, the outside-linebacker auditions are nowhere close to over.

“We feel really good about our depth at that position right now, and just because Cooper is slated as a starter … all those guys are going to play,” Lake said. “You’re going to see all those guys play on Saturday evening. So you’re correct, it was a hotly contested battle — very, very competitive. But at that position, just like a lot of our positions, you see guys roll in.

“When those guys (Bowman and McDonald) need to get a break, get on the sideline, get refreshed, get regrouped, get their legs back under them, those other guys are going to be in there.”