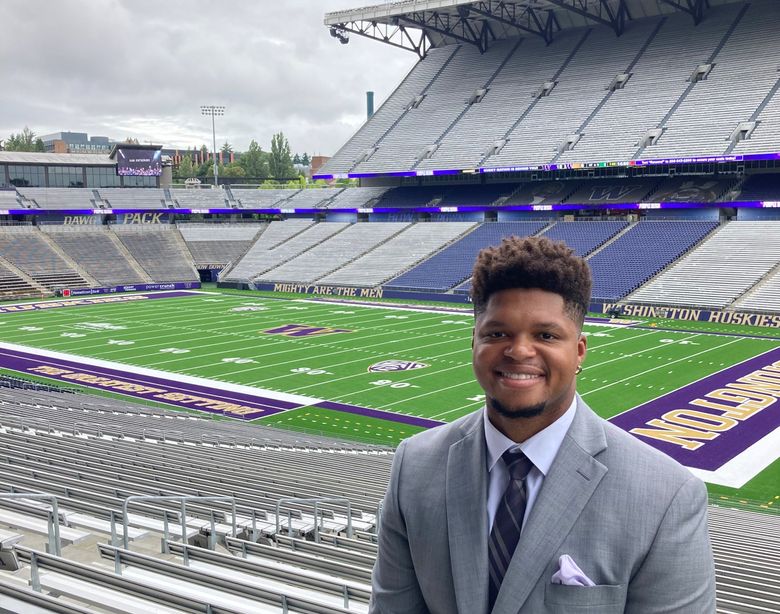 Greg Walker Jr. was 4 years old when he fell in love.

The blood didn’t even bother him.

Inside a hospital operating room in Senatobia, Mississippi, Walker Jr. was allowed for the first time to watch his father work. An experienced obstetrician and gynecologist, Greg Walker Sr. completed a successful cesarean section — which requires incisions in the uterus and abdomen to deliver a child.

Meanwhile, his son studied everything. He didn’t faint or freeze. The 4-year-old focused.

To be honest, Greg Jr. probably remembers much more than the baby’s father.

Instead, he plotted his future.

“I ended up falling in love with it there — wanting to be like my dad, wanting to be a surgeon,” he said. “So literally everything I did in my life was (geared toward) how do I make that happen?”

Which is when something else happened he didn’t expect.

“I kind of just got good at football.”

So good, in fact, that Walker starred as a linebacker and running back at St. Bernard High School in Bellflower, California — posting 120 tackles, five sacks and two interceptions in his senior season in 2007. So good that he earned all-league, all-area and all-CIF (California Interscholastic Federation) honors along the way. So good that eventually, inevitably, colleges came calling.

But in the recruiting process, football didn’t come first.

“Washington kind of separated itself, one, because of (former head coach) Tyrone Willingham,” Walker said. “I trusted him. I really liked the guy. I knew he valued me not just as a football player but as a human being. He helped me grow into a man. I talked to him about how I wanted to do pre-med and it would require me to take some courses that would interfere with football a little bit. Obviously I’m going to give it my all to do football and school as much as possible, but (becoming a doctor) is my No. 1 goal.

“Then me and my dad talked about it, and I knew Washington had a long history of being very good in medicine. I think they were No. 1 in primary care at the time. So I felt like it was a good city to be in and a place where medicine was kind of booming and doing well. I just thought it would be a good place for me to flourish.”

But he didn’t flourish — at least, on the field. While Walker redshirted, UW disintegrated. A program-worst 0-12 season forced Willingham’s firing, and the subsequent hire of Steve Sarkisian. After sliding back to safety, Walker made his first career start as a redshirt freshman in a nationally televised season opener against LSU.

And even then, it wasn’t a dream debut. With 69,161 stuffed inside Husky Stadium on Sept. 5, 2009, Walker missed two tackles that sprung LSU wide receiver Terrence Toliver for touchdowns of 45 and 39 yards, the difference in an eventual 31-23 defeat.

Added Walker, “I think that killed my confidence a little bit.”

Regardless, Walker never stopped working. While pursuing a general biology degree, he spent the next three seasons quietly excelling on special teams — and attempting to reclaim the starting spot that inexhaustibly eluded him.

“My position coach (Jeff Mills) was a good man. He definitely loved the fact that I wanted to do something different in my life and encouraged it,” Walker said of his dual pursuits. “But I wouldn’t say the rest of the coaching staff was exactly thrilled about it. I remember being told if I wanted to play more I’d have to make more time available to football and kind of jump through the standard hoops, kissing ass on the college level. I just wasn’t about that.

“I was really frustrated at the time, because even though I wanted to be a doctor, I felt like I was a legitimate football player that deserved a shot. And I knew the playbook like the back of my hand. So I felt like I just didn’t get a fair shot. I considered transferring early on. But I didn’t want to basically cop out. I wanted to finish what I started.”

He did much more than that. In his last three seasons in Seattle, Walker contributed 43 tackles in 37 games, being named UW’s most outstanding special teams performer in both 2010 and 2011. He eagerly embraced his role, earning captain honors in his senior season as well. And while Walker worked, Washington started to win, qualifying for back-to-back bowl games two years after being winless.

“I have so much respect for him,” said Mills, UW’s former defensive backs coach and a current senior quality control coach at Iowa State. “That third year we were together, within the room, within the culture, within the special teams and on defense, he was a real leader for us. He was a leader on and off the field.

“I want to make that point: he was very, very key in that whole process of that program becoming a winner.”

Of course, Walker was already a winner — what Mills called “a very uncommon man.” Between practices and games and lifts and flights and meetings and more, he found time to excel in his studies. He squeezed every educational drop out of the scattered, seldom available hours.

He calls it “the hardest thing I’ve ever done in my life.”

“I think college, for me, was significantly harder than medical school,” Walker said. “I felt like once I got to med school it was like, all I have to do is study and pass these tests? Oh, I’m good.

“In college there were 6 a.m. workouts, and then you go to class at 8. You get back there from 1 to 4 for football-related things and post-practice stuff, and then it’s 6:30-7 and I haven’t started studying. And I’m taking bio chem. I’m taking all the necessary classes, and I have to do well in them. So I’m putting in the time and I’m going way past midnight studying, and this is my routine. This is every night. If we’re going to an away game, I’m studying on the plane.”

And then, rather than return for a fifth season, he earned his degree and chased his dream.

“He sacrificed,” said fellow UW DB Justin Glenn, now the program’s director of recruiting. “He did what he needed to do. There was really no other route. There was no other option he was going to go.”

Added Mills: “You walk away (from watching Walker work every day) and go: ‘Wow, I wish I could be more like that. I wish I had the drive to be able to succeed at that type of level.’”

It was July 4, 2017, and the UW alum was a resident doctor at Harborview Medical Center in Seattle — one of the busiest trauma hospitals in the country. He had already completed a four-year college football career, followed by four more years of medical school at Brown University. Now, he was immersed in a five-year stint as an orthopedic resident doctor with UW Medicine.

But he had never experienced anything quite like this.

“I saw 50 patients on call in less than 24 hours, with 26 blast injuries (from fireworks accidents) and the rest just all types of orthopedic injuries,” Walker said. “It was mayhem. It was like being in a battle zone and having to triage all these people and take care of them and prepare them for surgeries, getting people consented for amputations versus trying to put (appendages) back on. It was a really busy night. It was the first time I ever asked myself if I could do something.”

Walker, of course, had prepared his entire life to perform in pressure situations — and Pac-12 football couldn’t compare.

“It’s hard, right?” he acknowledged. “You can have somebody in who has an arterial injury, and you’ve got to decide what they need. Or you might have somebody who’s blown off their hand.

“It’s not just the medical decision-making. You’ve got to be a human being. You have to talk to them calmly, explain what’s going on, keep them in the loop, get them to sign surgery consent forms to give you permission to do whatever you have to do. It’s an intimate, challenging process.”

From an educational standpoint, that process is nearly complete. On June 30, Walker completed UW Medicine’s orthopedic surgery residency program. He’s currently embarking on a one-year fellowship through UC Davis that specializes in foot and ankle surgery, including six-month stints at orthopedic practices in Reno, Nevada, and Sacramento, California.

“I like orthopedics because it’s usually something that I can fix with my hands,” said Walker, who plans to pursue a career in private practice following the fellowship. “I say that because not all specialties have things that you can fix. In orthopedics, if you break something, I fix it. If you can’t walk or something, I can help you feel better.”

Same as his father, Greg Walker Jr. is here to help. And he’s also focused on raising a family. Greg met his wife, Taylor Walker — the daughter of former UW basketball coach Lorenzo Romar — during his freshman year at UW in 2009. Together, their family has expanded to include son Kelly (3 years old), and daughter Dallas (4 months).

He fell in love at 4 years old and has done so several more times since.

A decade after playing his final down, Walker keeps on winning.

“I think I talked about this when he played for me, but it’s the same thing now: I trust Greg Walker,” Mills said. “I would want to have his expertise in the room with my family or my friends or myself. I’d put my life in his hands, for sure.”