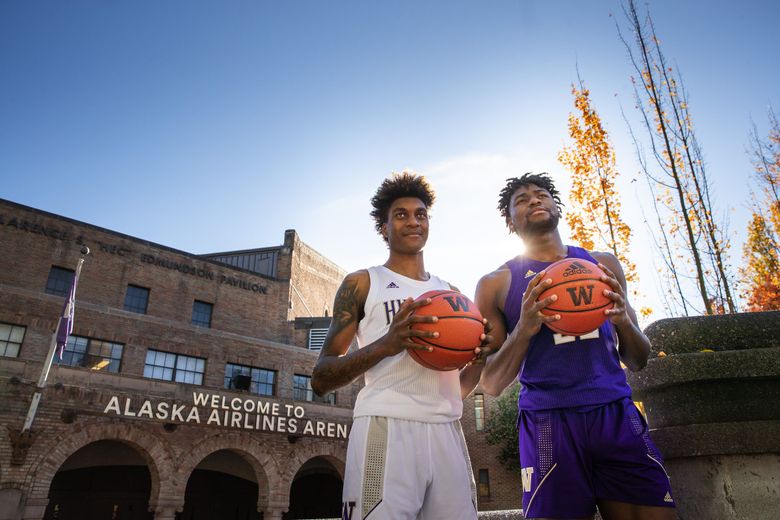 That’s how it is with these two.

Stewart, the brazen and brawny, square-shouldered Jamaican, tackles questions like he tackles most obstacles in life – unabashed and direct.

“Pretty much I’ve always been a people person,” Stewart says. “I’ve always liked being on a team because it fits my personality. I like working hard and seeing other people have success.”

“He’ll make a difference in the culture of our program for the next 20 years,” Hopkins said. “I truly believe that. That’s just who he is. If guys are down, he hugs them. If the locker room is dirty, he’ll get guys to clean it up.

“He’s just got it. People respect him because whatever he says, he does all the time. He’s like an old soul. The way he handles time management and how he treats people, it’s way beyond his years.”

Are the Huskies being overlooked? Maybe we shouldn't rush to judgement

And then there’s UW’s other wunderkind McDaniels, a laid back, 19-year-old man-child from Federal Way who has a soft-spoken personality and an assortment of basketball gifts that scream future NBA star.

Hopkins added: “When we got around Jaden, I had to ask does he say a word? He just got his braces off and I was kidding him the other day and said, man you’ve got a great smile.

“He’s got a personality that we want to pull out. He’s got so much it factor too. Just like Isaiah. But it’s different.”

The on-court differences between the 6-foot-9 freshman forwards are the reasons why the Huskies believe the preseason All-Pac-12 first team picks could comprise the best big-man tandem in UW history.

“We don’t get in each other’s way,” Stewart said. “We help each out. He’s a great rebounder. I am as well. We’re both dominant at what we do.”

McDaniels added: “We run plays and he’ll be like ‘I’m going to set you up on this one.’ And then I’ll be like, ‘Cool, I got you on the next one.’ It just keeps going back and forth.”

Before the defending Pac-12 regular-season champion Washington tips off at 6:30 p.m. Friday against No. 16 Baylor in Anchorage, Alaska, the Huskies’ touted freshmen sat down for a 30-minute interview and talked about their budding relationship, NBA draft lottery speculations and the comparisons linking them to former Duke stars Zion Williamson and RJ Barrett.

‘He’s relentless and just wears you down. The guy is a monster. Ever since I can remember, he’s always been that way.”— Nahziah Carter on Isaiah Stewart

First off, are they friends?

“Yeah, we’re friends,” said Stewart who calls McDaniels J-Mac. “And it’s growing. We’ve been knowing each for a while now and played in the same All-Star games this year. … We live together with the other freshmen (RaeQuan Battle and Marcus Tsohonis) so we spend a lot of time together.”

How are the projected one-and-done prospects handling NBA rumors. (Stewart is the projected No. 3 overall pick and McDaniels is No. 9, respectively, according to NBAdraft.net.)

“I know that I’m not there yet and I know that the game can be taken away from me any day,” said Stewart, referring to a hamstring injury that forced him to miss most of his sophomore season. “I’ve been through a lot of injuries. I’ve been out a few times. I just stay focused on working hard, getting better and not paying attention to predictions or what people are saying about us.”

Added McDaniels: “I hear things from people saying how good you could be, but I know you still have to put in the work. I’m not there yet and I’m not satisfied with what I’ve done.”

And what about the Zion and Barrett comparisons?

“That’s a no,” McDaniels said emphatically. “Nothing against those guys, but I don’t really like that comparison or any comparison in general because we’re our own persons and we all have our own playing styles.”

Analysis: Three keys and three players to watch for the Huskies this season

Perhaps UW junior guard Nahziah Carter put it best when he described Stewart, a rugged 250-pound forward, “as an attack dog that you unleash on opponents.”

“There’s not anything he can’t do,” Roberts said.

Stewart tells a couple of stories to illustrate the point. As juniors in high school, he played against McDaniels for the first time in a summer AAU game on the Nike EBYL circuit in Atlanta.

“Before the game, a coach called me and said don’t worry about him because he’s just a skinny big guy,” Stewart said laughing. “Wrong, wrong, wrong. What he should have said was, this dude is a guard out there.

“There’s a play when J hit me with a hesi (a hesitation move) and went by me and just flushed it. And I’m like, big guys aren’t supposed to do that.”

‘He rebounds and blocks shots like a big, but he shoots, dribbles and passes like a guard. He’s next level.’ — Nate Roberts on Jaden McDaniels

Midway in training camp last month, McDaniels got Stewart’s respect once again when he seemingly came out of nowhere to smack his layup attempt hard off the glass for a jaw-dropping block and rebound that left witnesses in awe.

“That block was crazy,” Stewart said.

McDaniels added: “He’s the biggest, baddest dude on the team and when he gets in the paint there’s not a lot of people that can stop him. So just being able to stop him is a big thing.

“I’ll say this, playing against him every day has made me a better player. Isaiah brings the best out of you because he forces you to raise your game. If you don’t, he’ll embarrass you.”

That sentiment makes Hopkins smile. The UW coach believes “steel sharpens steel” and is counting on the Huskies’ super-sized roster highlighted by seven players 6-9 or taller will improve throughout the season.

“Those two kids are just scratching the surface (of their talent),” he said. “You see glimpses of it in practice. They’ll make plays where you’re like, omigod are you kidding me?

Stewart, who proclaimed Washington as a Final Four team last summer after McDaniels signed, doesn’t shy away from the expectations.

The Huskies were picked third in the Pac-12 preseason media poll and most college basketball experts believe UW will make a second straight trip to the NCAA tournament.

“I said that and I still believe that because I know how much of an impact player J-Mac is,” Stewart said. “People always ask me who is the best player I played against in high school?

“They think it’s James Wiseman? But the toughest player I ever played against was Jaden McDaniels.”

McDaniels flashed a rare smile and two exchanged a fist bump, one of many assists between the heralded Huskies.