The former Timberline High star in Lacey spent just one season with the Huskies after transferring to UW last year following two seasons at Wichita State.

Stevenson, who averaged 9.3 points, 3.6 rebounds, 2.1 assists and 1.1 steals last season, got off to a slow start while tallying eight points or less in the first nine games.

The 6-foot-3 playmaker scored in double figures for the first time on Jan. 9 with a season-high 27-point performance during an 84-78 loss at California. He scored at least 11 points in 12 of UW’s last 17 games.

However, Stevenson struggled to mesh with Washington’s three-guard attack. He shot a dismal 29.8% on three-pointers despite leading the team with 124 attempts behind the arc.

Stevenson, who led the Huskies with 29 steals, admittedly had difficulty adapting to Washington’s 2-3 zone.

And UW’s train wreck of a season surely played a role in his decision to find another team. 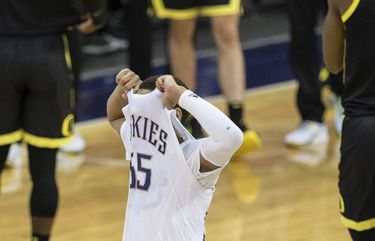 “I’ve never been in this position at all, so it’s a learning position for myself as well as the team,” Stevenson said in January. “It’s frustrating, to be honest. It’s frustrating losing games, whether it’s by five or 30. Losing is losing. It sucks.”

Last year, Stevenson chose Washington over Gonzaga, Oregon, San Diego State and Maryland, which at the time was a coup for the Huskies in securing a returning regional hero with Division I experience.

Stevenson was one of three incoming UW transfers last year, along with Cole Bajema and Nate Pryor.

Entering the transfer portal isn’t a guarantee a player will leave, but it allows them to talk to other teams. Furthermore, players like Stevenson would have two years of eligibility considering the NCAA is giving 2020-21 athletes an extra year in response to the COVID-19 pandemic.

Stevenson started 23 of 26 games, and his departure would likely create an opening in the rotation for Bajema and RaeQuan Battle, who combined to start just one game.