Forget about the second half that almost turned magic tragic. Disregard the near erasure of a 21-point lead, too.

There were certainly moments Saturday that made it look as though the Huskies men’s basketball team would embody the lowly expectations attached to them before the season began. The reality is that they made themselves relevant again.

Saturday’s 67-64 win over Stanford was as much a proclamation as it was a victory. It signaled to the rest of the Pac-12 that Washington (8-7, 3-2 Pac-12) might not be the pushover pundits predicted they would be. They’ve won three of their past four, and this wasn’t Utah or Cal. This was a Stanford squad that knocked off fifth-ranked and previously unbeaten USC on Tuesday. 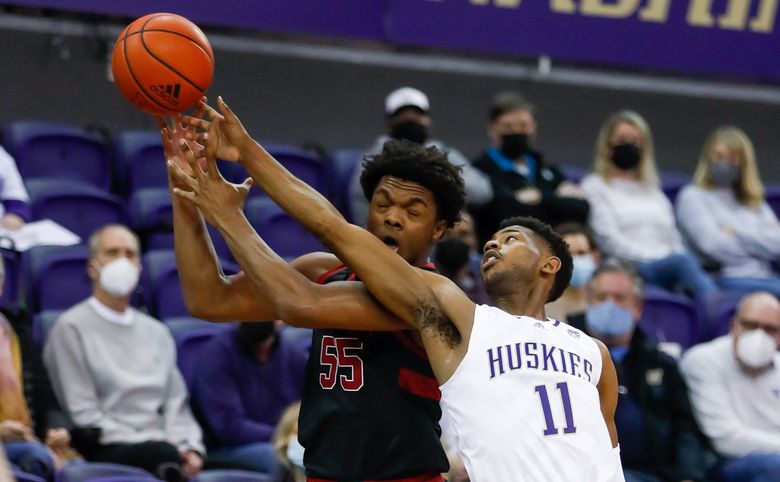 “We know and our players know how good we can become, and we’ve shown flashes,” Huskies coach Mike Hopkins said. “We were thankful, grateful to come out with a win. It felt like we were in a big puddle of mud fighting. That’s the way the end of the game was.”

We’ll get to the end of the game in a minute. But not before acknowledging the best half of basketball the Huskies have played all season. It’s gotta be understandable why Alaska Airlines Arena featured as many empty seats as it did Saturday. This program has finished at or near the bottom of the Pac-12 in each of its past two seasons, and was picked to place 11th this year.

You wouldn’t know that watching those first 20 minutes vs. Stanford. Hopkins talked about flashes — that first half was a meteor shower.

Washington hit 15 of its first 32 shots and seven of its first 15 three-point attempts to establish a 43-25 lead by the intermission. Most impressively, it forced 13 first-half turnovers from Stanford, and 21 overall. This came three days after forcing 17 turnovers in a win over Cal, hearkening back to the days of defensive dominance when Matisse Thybulle was leading the nation in steals.

“It’s a little different this year just because Matisse was unreal. It was basically him getting all the steals,” Washington wing Jamal Bey said. “This year’s a little more spreading the wealth. … We can get steals at the top and the forward, so I think it’s a little bit more lethal this time.”

Speaking of Bey, the senior had all 17 of his points in the first half, where he went 6 for 10 from the field and 4 of 6 from deep. It was, as Hopkins said, “a breakout game” for the Las Vegas native. It might have been a breakout game for the whole team, really, as UW went up 52-31 with less than 15 minutes to go in the second half.

A loss of that nature would have been devastating to UW. It would have gone down as the choke job of the season. But after Terrell Brown Jr. — who came into the game averaging 20.7 points and finished with 25 Saturday — made one of two free throws to put UW up by three, the Huskies fouled Harrison Ingram on the ground with two seconds left, essentially sealing the win. “They’re not going to get a three-point shot on us,” Hopkins said in reference to their last-minute fouling strategy.

There are miles and miles left on this season. Washington still has matchups with UCLA, USC and Arizona — all of which are ranked in The Associated Press’ Top 10. It’s quite possible that Saturday was the pinnacle for the Huskies this season.

But I don’t know — they showed something vs. Stanford.

It wasn’t long ago that the Hopkins era seemed destined to end in March. Maybe that will still be the case. The Huskies have long held a sense of belief despite all the outside pessimism. Saturday offered a glimpse as to why.