Four Huskies — P.J Fuller, Cole Bajema, Daejon Davis and Emmitt Matthews Jr. — trudged slowly up the court together, their arms thrown around each other’s shoulders and a look of relief on their faces.

Finally, with 5.5 seconds remaining in the second overtime, Washington’s men had a win over Utah safely in hand. All that remained were Matthews’ free-throw attempts on the other end and the last few ticks of the clock.

The fact that Washington’s eventual 77-73 win Saturday over Utah, the worst team in the Pac-12 this year, was never assured until practically the final buzzer — and looked precarious at many junctures — was a reminder that this Huskies’ team is still very much a work in progress. 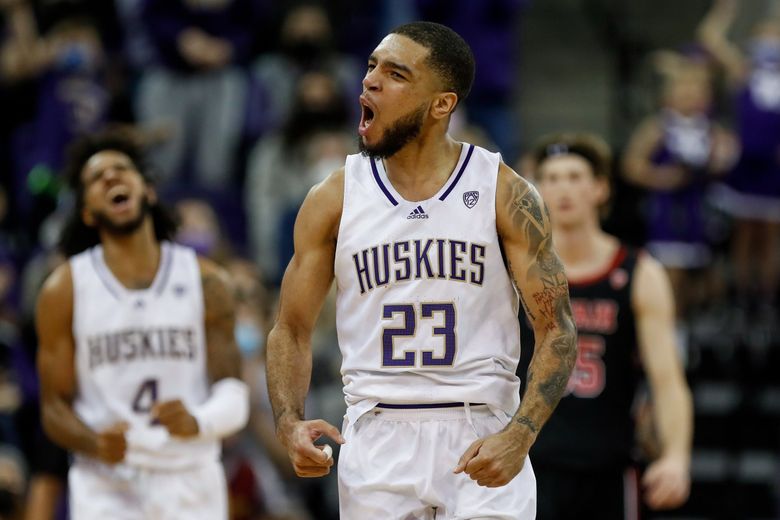 But the fact that they persevered and prevailed for their fifth Pac-12 victory in their last six games proves this Huskies’ team is also growing before our eyes.

“They’re finding how to win,’’ is how coach Mike Hopkins’ succinctly put it after joking about the effect of that game on his heart.

And speaking of Hopkins, that hot seat upon which he’s been poised for at least a season-plus? It’s cooling off rapidly. The Huskies are 11-8 overall and 6-3 in Pac-12 play, squarely in the middle of the pack in the conference and seemingly gaining confidence by the game.

Not that their performance at Alaska Airlines Arena was a work of art, but the Huskies have to be characterized as the surprise team in the Pac-12. Picked in the preseason coach’s poll to finish 11th, they have a win over Stanford right after the Cardinal handed No. 5 USC its first loss of the season; a win over a Colorado team that had just upset Oregon; a road sweep of Utah and Colorado; and a win over Oregon State in Corvallis.

And Hopkins found, if not art, then certainly grit in this win over Utah. The Utes, who had their best player, Branden Carlsen, back from an injury, began to sense a chance to break their nine-game losing streak and pick up just their second Pac-12 win. But the Huskies skirted danger and finally put the game away with a back-to-back three-pointers by Daejon Davis and Cole Bajema in the second overtime.

“It wasn’t pretty, by any stretch of the imagination,’’ Hopkins said. “But the plays they made were tough. It felt like everything was against us. And they just kept fighting.”

That toughness seems to be a trend, and a growing trademark of a team that beyond Terrell Brown Jr — who scored 30 on Saturday — has trouble creating an offensive identity. But the Huskies are coming off a win against Colorado that had Buffaloes’ coach Tad Boyle fuming on his postgame radio show, “We got bullied tonight. We got punked. We got out-toughed.”

Asked to pinpoint the cause of their turnaround after suffering ignominious defeats in the preseason to the likes of Northern Illinois, Wyoming, Winthrop and Utah Valley, Nate Roberts didn’t hesitate:

“Defense. That’s what we hang our hat on every day, every game. Making stops, turn teams over, getting transition, getting easy buckets.

“And then playing as a team, playing together, and believing in each other. That was been our biggest mantra. And so just our leaders reminding the other guys to just believe, keep fighting, keep believing. You have results like this.”

Granted, the Huskies got beaten handily by Oregon and Arizona and had their game against powerhouse UCLA postponed by COVID. But Roberts said the team’s belief is growing rapidly as they master Hopkins’ zone principles.

Hopkins said that while the Huskies’ spurt might be surprising to others — coming off seasons of 5-16 and 4-13 in the Pac-12 — it has not been to him.

“We knew what type of team we had,” he said. “It just goes back to coaching — can you get these guys to jell quicker? That’s part of the ups and downs of the season.”

Hopkins raved about the character of this Huskies’ team and cited, of all things, a team huddle as a sign of their unity.

“We like to look at our huddles,” he said. “And near the end of the game, we had one of the best huddles we’ve seen.”

I couldn’t resist asking Hopkins what makes for a great huddle.

“You can see when everybody’s together,’’ he said. “They’re all connected and they’re all looking at each other. And you can see the authenticity of it. There’s fake huddles, too. It’s like when you hug your wife or your son or your daughter — you know, the love hug compared to, like, the side hug. You can just you can see and feel the connectivity.”

The Huskies’ recent success enticed a raucous crowd of 7,729. And during a timeout in the first half, they roared as new Huskies’ football coach Kalen DeBoer took the mic and promised to restore the tradition and excitement of Washington football.

The men’s basketball team, maligned and downtrodden for the past two seasons, is finally taking some steps in that direction as well.