Trip after trip led to brick after brick or block after block.

Three-pointers flew too long or fell short. Contested layups rattled around the rim before landing in the hands of Trojans.

The Huskies did all they could do defensively. It was a masterful performance on that side of the ball.

But when it came to the basic element of the game — simply putting the ball through the net — Washington had no answers.

USC beat UW 65-61 in the second round of the Pac-12 men’s basketball tournament Thursday, suffocating the Huskies in the second half. A three-point halftime lead did not lead to a victory for Washington, whose NCAA tournament dreams are officially dashed. 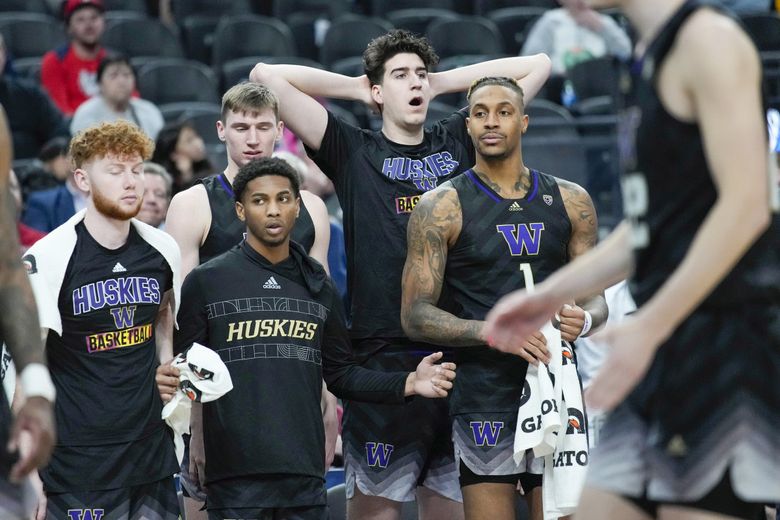 The Huskies scored just 22 points in the last 20 minutes, and recorded just one field goal over the last 6 minutes, 43 seconds of the game. It was agonizing for the UW die-hards in attendance who saw that the Huskies were more than capable of upsetting the Trojans. But it was a fitting conclusion for the Huskies, who have struggled on the offensive end for most of the season.

For more than just a moment, it looked as though sixth-seeded Washington (17-15) might sneak by USC and meet UCLA in the tournament’s semifinals. They were up 39-36 at halftime and led by as many as eight early in the second half.

The catalyst, to the surprise of nobody, was Terrell Brown Jr., the Pac-12’s leading scorer. The senior posted 21 points in the first half, hitting eight of his first 13 shots.

Everything was in place for a surprising, if not shocking, outcome that would have had captivated Seattle heading into Friday’s game. Then, like a Vegas magic trick, USC made UW’s offense disappear.

Perhaps this wasn’t a huge surprise. The Huskies just aren’t a good offensive team, Yes, they entered the game sixth in the Pac-12 in points per game, but they were 10th in field-goal percentage and 10th in three-point percentage. They’ve relied on Brown primarily. His 21.7 points per game are 4.6 more than anyone else’s average in the league.

But if he’s shut down, there’s nobody else who can create for the Huskies. And in the second half Thursday, shut down he was.

Brown scored just two points in the second half and finished 9 of 25 from the field. The amount of contested shots he was forced to put up spoke to the Huskies’ offensive limits. Nobody else was stepping up.

Emmitt Matthews Jr. tallied 12 points but made just three of his 10 shots. Jamal Bey added 10 points but was also 3 of 10 from the field. What had to be particularly frustrating was that UW was doing everything else necessary to give them a chance at the win.

Washington forced 23 turnovers and committed just eight. That’s 15 extra possessions, which led to 14 more shots than the Trojans. The Huskies also held USC to 6 of 19 from three-point distance and made 15 of their 18 free-throw attempts. But that lid just never came off the hoop in the second half.

“That second half, it was like being in a mud-wrestling match, going back and forth,” Washington coach Mike Hopkins said. “We had opportunities; we just didn’t make enough plays.”

Despite their scoring struggles, the Huskies still had a chance to win in the final minute. With his team trailing 63-59 with 37 seconds left, Huskies guard PJ Fuller stole the ball then connected on a layup. Ten seconds later, USC’s Drew Peterson committed an offensive foul to give the ball back to Washington. Didn’t matter, though. The Huskies’ final possession was emblematic of the second half and perhaps their season at large — missed layup by Brown, then a missed layup by Matthews after UW secured the offensive board.

It’s tough to say what’s next for Washington. Hopkins was hopeful the Huskies could get an NIT bid, and if not, there are other postseason tournaments. The coach was also praising how his team played in the final 22 games of the season after its sluggish 5-5 start.

But there was sadness at the podium after the game, particularly from Bey, the senior who might have played his last college basketball game.

“I’m frustrated with myself; there are a lot of shots and plays that I’m going to have to re-evaluate,” Bey said. “Just frustrated. Just kind of want to be with my guys.”

The Huskies have a lot to be proud of. They put up a winning record in the Pac-12 after the media picked them to finish next to last.

But Bey used the word that the whole team has to be feeling right now: frustration.