Sure, it was a ridiculous question to pose to the eternally optimistic and effervescent Mike Hopkins, but somebody had to ask.

“Hey Hop, do you think there’s still enough time in the season to get on a run and …”

Much like an trigger-happy contestant on the game show Jeopardy!, the Washington men’s basketball coach blurted out an answer before the question was complete.

“Oh yeah,” said Hopkins flashing a huge smile. “Are you kidding me? Heck yeah. How exciting is this? You have three (games) and all great games. You have a rivalry (Washington State). A top 25 team (No. 12 UCLA). An Oregon rivalry (against the Ducks) and then Senior Night (and a regular-season finale versus Oregon State).

“It doesn’t get better than that. This is awesome. If you love college basketball and you’re a competitor, this is what you want. This is what you’re waiting for. … LET’S GO PAC-12!” 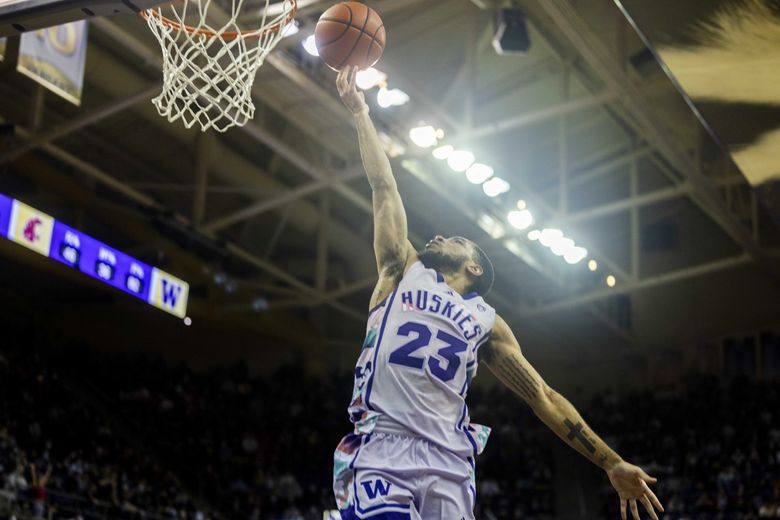 Lot of unknowns remain in UW Husky men’s season, but at least they gave their fans a rivalry win
Advertising

It’s fair to say, Hopkins is excited about the final week of the regular season, which gives the Huskies a chance to gain ground in the Pac-12 standings and make one final push for a top-four finish that secures a first-round bye for the conference tournament.

Hopkins is less concerned about conference tournament seeding and entirely focused on finding a way to upset UCLA and capturing Washington’s first win against a ranked team since 2019.

The original UW-UCLA matchup on Dec. 5 was canceled and ruled a UW forfeit by the Pac-12 after the Huskies were unable to play due to a COVID-19 outbreak.

Later, the Pac-12 changed its COVID-related cancellation policy and the game was rescheduled for Monday.

In some ways, squeezing a highly anticipated matchup against a powerhouse such as UCLA in the schedule is inopportune for the Huskies considering they played Saturday and beat WSU 78-70 in an emotionally charged game between in-state rivals.

However, UCLA also played Saturday and the Bruins are concluding a three-games-in-five-days road trip that included last Thursday’s 68-63 loss at Oregon and a 94-55 blowout win against Oregon State.

“Getting on a bus or getting into a car or getting on a plane is traveling,” Hopkins said. “There’s no time difference with UCLA playing at Oregon State, but it’s still travel. It’s still wear and tear on the body. So it’s good to be home.

“It’s like a video game. When you lose your energy, you die. So you try to find ways to get energy. Ice your legs. Stretch your body. Make sure you get enough rest. Make sure you’re doing all of the things that give us energy is going to be the most important way that we utilize (Sunday). Being at home gives us an advantage for sure.”

UCLA (21-6, 13-5), which will play its sixth game in 12 days, is also unlikely to have leading scorer Johnny Juzang (17.0 points per game) who sat out Saturday due to an ankle injury

“I would doubt it,” Bruins coach Mick Cronin reportedly said Saturday when asked if Juzang would play against UW. “He looked better today. But I don’t know. I don’t know. I’d say doubtful. But you never know. He puts a lot of work in on his body with flexibility and stuff like that, so he will surprise you at times.”

UCLA certainly didn’t miss Juzang (sore hip) or Cody Riley (rest) when they sat out the first meeting against Washington.

Without two starters, the Bruins pounded the Huskies 76-50 at Pauley Pavilion on Feb. 19 in large part because of backup guards Jaylen Clark and David Singleton each posted career-highs and scored 25 and 20 points, respectively.

“They’re big and physical and they really pounded us in the paint and they shot the three as good as any team has shot it (against us) this year,” Hopkins said noting UCLA converted 10 of 22 three-pointers. “There’s no secret to this thing. We’re just going to have to execute better.”

Since 2012, UW is 3-13 against UCLA, which includes the Bruins’ current five-game winning streak versus the Huskies.

Two weeks ago, Washington tallied its fewest points of the season against UCLA while shooting 34.6% from the field and 17.6% (3 of 17) on three-pointers.

The Huskies held the Bruins without a field goal in the first five minutes and trailed 37-25 at halftime. UCLA broke the game open with a 26-3 run to start the second half and led by 37 points in the final minutes.

“We know they’re a good team and a Final Four team last year,” said UW guard Terrell Brown Jr. who scored 13 points against the Bruins. “It’s just being locked in from start to finish, that’s the biggest key. We know they’re going to go on runs. We have to be able to counter the runs and sustain and stay levelheaded.”

Hopkins added: “The good thing is we just played UCLA. We know kind of what they’re going to do. Now we have to be able to go out and execute. Now do we have enough energy to execute? They’re one of the best teams in the country.