They were everywhere — swarming, stealing, relentless — just like old times.

On Saturday afternoon, the Washington men’s basketball team turned back the clock and dialed up the defensive intensity for a vintage performance that was reminiscent of the days when the Huskies harassed and hounded opponents into submission.

Washington, which forced a season-high tying 21 turnovers, raced out to a 22-point lead in the first half and held on in the final seconds to capture a 67-64 victory against Stanford in front of 6,627 at Alaska Airlines Arena.

“We have some moments that it’s just elite,” coach Mike Hopkins said when asked about a UW defense that entered the game ranked 12th nationally among Division I teams while forcing 17.8 turnovers per game. “The guys are flying around. They’re competitive. And then you add the crowd. There were some points tonight where that crowd just gives you a boost. 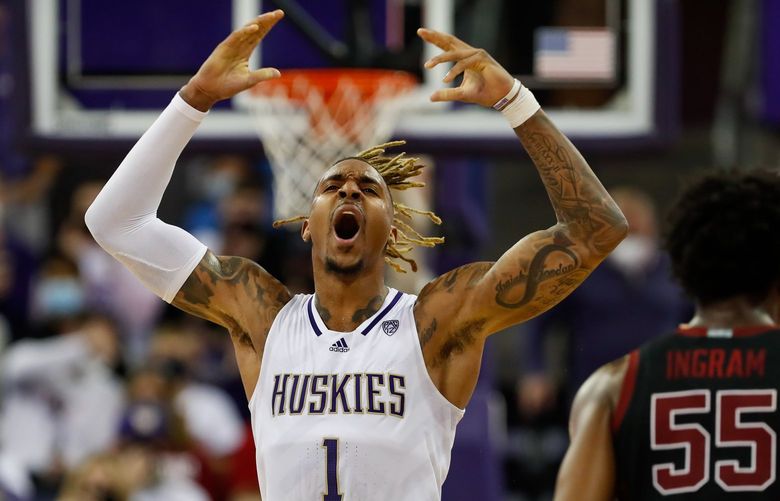 UW Husky men’s win vs. Stanford wasn’t just a victory, it was a message to the Pac-12 that they’re better than expected

“When we’re locked in and loaded and needing to get a stop, this is a lot like a couple of years ago with the defensive-minded guys that they are.”

A few years ago, Washington ran roughshod over the Pac-12 and won the league’s 2018-19 regular-season title with a turnover-inducing defense that led the conference in steals and blocks and ranked second in points allowed.

Admittedly, the Huskies started slowly this season while posting a 5-5 record in nonconference games, including embarrassing defeats to Northern Illinois, Utah Valley and Winthrop.

However, since the start of Pac-12 play, Washington (8-7, 3-2 Pac-12) has found a second gear defensively, which was on display again Saturday.

“We’ve been making that our staple lately,” said Jamal Bey, who scored all of his season-high 17 points in the first half and finished with three rebounds, two assists, three steals and two blocks. “No matter what’s going, if the shot is not falling, we’re playing defense no matter and trying to turn people over. That helps us a lot.

“We have a lot of new guys coming in. They’re veterans, but they don’t know the zone like me and Nate (Roberts) and the people that haves been here. They know it now, and they’re being amazing up there, especially at the top.”

Washington’s 2-3 zone starts with senior guards Terrell Brown Jr. and Daejon Davis, who rank first and second in the Pac-12 with 41 and 34 steals, respectively.

“Our 2-3 zone is so unique just the way we play,” said Brown, who had a game-high 25 points, three rebounds, four assists and four steals. “In a way, me and Daejon have contests to see who can get the most steals in a game. And now Jamal is up there, too, getting steals, too, so it’s like we’re all competing but still staying aligned with our principles.

“We can definitely feel how things change for them guys. The mental mistakes and small mistakes that they made, I think we just capitalized on it with the energy that we brought.”

Washington nearly squandered its big lead as Stanford closed the gap with a frantic finish to trail 66-63 with 14.5 seconds left.

Stanford’s freshman forward hit the first free throw and purposely missed the second attempt, which failed to hit the rim and sealed the win for the Huskies.

“We were just thankful and grateful to come out with a win however it had to be,” Hopkins said. “It felt like we were in a big puddle of mud fighting. That’s the way the end of the game was, and we prevailed.”

The Huskies were outscored 39-24 in the second half, which was a complete reversal from the first half when they raced out to a 39-17 lead and were up 43-25 at the break.

“We hadn’t had a great shooting performance in this place yet,” Hopkins said, bemoaning a slew of slow starts at home this season. “I thought in the first half we shared it. We were locked and loaded.

“And it started with our defense. All of those are incredible energy plays. When you have elite guys like Terrell and Daejon who can pass, dribble and shoot and you have guys who can shoot it like Jamal. How good was Jamal Bey in the first half? He looked a little bit like Glen Rice. He was on fire.”

For about 30 minutes, Stanford had no good answers against Washington’s 2-3 zone, which smothered and harassed the Cardinal all over the court and made it virtually impossible for the opposing team to initiate its offense.

Quite often, Stanford launched wild attempts at the end of the shot clock, threw errant passes into the stands or simply had the ball taken away.

Washington turned the Cardinal’s miscues into easy baskets and enjoyed a decisive 29-8 advantage in points off turnovers.

“It wouldn’t be too far-fetched to say we’re one of the best defensive teams in the country,” Brown said after beating a red-hot Cardinal team that had a four-game winning streak, including a 75-69 upset win Tuesday against No. 5 USC.

The Huskies have won 3 of their past 4 games and, quite suddenly, the forecast appears brighter for a UW team picked 11th in the Pac-12 preseason media poll.

Three weeks ago, the basketball analytic website KenPom.com predicted Washington would finish 6-23 overall and 1-18 in the Pac-12.

“From the beginning we believed in ourselves no matter what anybody said about us,” Bey said. “We didn’t care about the rankings. We knew we’re a good team. We knew what we were, and we just had to prove it and I think that’s what we’ve been doing.”