It hardly mattered that he missed 10 of his previous 11 attempts and appeared exhausted while playing at least 37 minutes for the second straight night.

Down two points with 27.5 seconds remaining in the biggest game of the season, the Huskies put the ball in the hands of their star point guard.

With USC’s Isaiah Mobley hounding him, Brown drove to the rim and got up a reverse layup that was blocked off the glass and bounced out of bounds.

Washington had one last chance to win or tie with 12.1 seconds on the clock when Emmitt Matthews Jr. knifed into the lane and his mid-range floater over Mobley missed the rim and collected by USC.

Matthews stared with disbelief into the crowd of 10,417 at T-Mobile Arena while the No. 3 seeded Trojans made two free throws at the other end to secure the 65-61 win in the Pac-12 tournament quarterfinals and send the No. 6 seeded Huskies home. 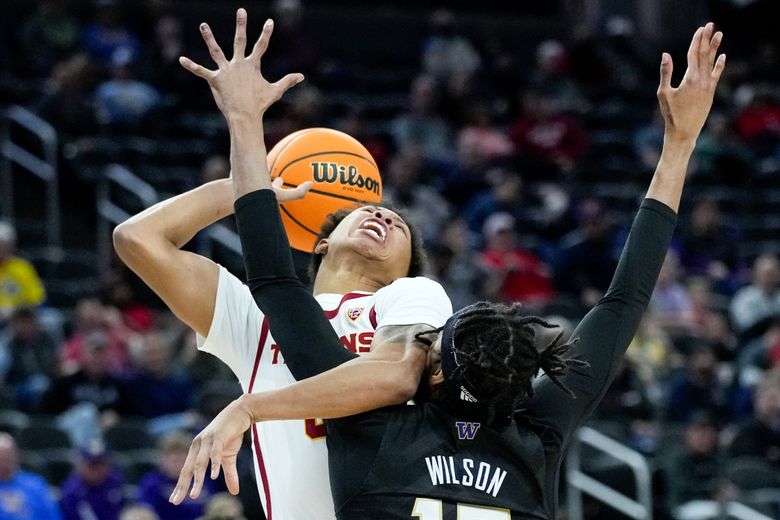 Husky men knocked out of Pac-12 tourney because of the same issue that’s plagued them all season: lack of scoring

“These are guys are winners and competitors,” coach Mike Hopkins said. “They don’t want to see their season end. We were one of the hottest teams in our league at the end of the year. Some of them are seniors. It’s tough. When you fight like hell and you love the guys that you’re playing with and you love your teammates, that’s what it feels like.

“It’s one of the things that I’m most proud of, seeing the emotion and seeing the way they love each other and the way these guys connected, and having four new guys and having guys that stayed when everybody else wanted to go. That’s a pretty cool thing even though we lost.”

The loss snapped UW’s three-game winning streak and forces the Huskies (17-15) to wait until Sunday when the NIT bids are announced to find out their postseason fate.

Heading into the conference tournament, most NIT projections did not include Washington, which needed a couple of wins against quality opponents to improve its resume.

Certainly, that’s going to be one of the lingering story lines from what was billed as a make-or-break season for Hopkins.

The Huskies feasted on lower-tier Pac-12 opponents — including an 82-70 victory over No. 11 seed Utah in the Wednesday’s tournament opener — but they struggled against the league’s elite.

Washington was 0-5 against the conference’s top three teams losing each game by at least 10 points and collectively the margin of defeat was 17.5 points.

Brown tried to buck the Huskies’ sordid history with yet another spellbinding performance befitting his final college game.

The Pac-12 scoring leader and all-conference performer finished with 23 points, but he had just 2 in the second half when Washington converted 8 of 34 shots.

“Nobody wants a guy to score a lot on us,” USC guard Boogie Ellis said. “I told the guys at halftime if we can shut him down, we’ll win the game and we did that.”

The Huskies got off to a wonderful start thanks to Brown who scored all of their points while carrying them to an early 9-8 lead.

The first half featured 10 lead changes and the two teams wrestled for control over the next five minutes, which resulted in the Trojans going ahead 19-18 following a second-chance bucket from Ethan Anderson.

At the other end, backup guard Cole Bajema answered with a three-pointer and the Huskies never trailed again in the first half.

Brown highlighted UW’s 21-17 run in the 9½ minutes with a trio of highlight baskets, including a pullup midrange jumper over Drew Peterson in the lane and a driving layup in traffic.

The Pac-12 scoring leader capped the first-half scoring for the Huskies with a step-back three-pointer against Chevez Goodwin and Washington went into halftime with a 39-36 lead.

Neither team led by more than five points the rest of the way.

Washington countered USC’s superior size with a smothering defense that forced 23 turnovers and led to 16 points.

At one point, the Huskies trapped Goodwin in the corner and Jamal Bey came away with a steal that sparked a fast break in which Brown found Matthews for an alley oop dunk and a 50-47 lead.

And that’s when UW’s offense turned frigid and converted just 3 of 20 field goals in the final 12 minutes.

Nate Roberts tied the game at 56-56 with an alley-oop dunk at the 6:43 mark when Washington missed its next eight field goals during a 6-minute span.

Afterward, USC coach Andy Enfield lamented not putting the Huskies away during their drought.

“I know it’s late, but we didn’t want anybody to leave the arena,” Enfield said. “So we kept it very interesting, until the final buzzer.”

Down 63-59, backup guard PJ Fuller stole an inbound pass and scored on a layup to cut UW’s deficit to two points with 35 seconds left.

The Huskies forced another USC turnover to set up their last two shots by Brown and Matthews.

“People always say defense wins championships and we’re a team that believes in that,” Mobley said. “Down the stretch, I knew I had to step up and guard. It was big time, money on the line, and we got stops. So happy for the team.”

Enfield added: “He was impressive to be able to protect the rim like he did with a big block and go out and guard Matthews at the 3-point line, stay with him, his drive, because he’s a big guy guarding smaller players. Isaiah is one of the best defensive players we’ve ever had here.”

After connecting on 8 of 13 shots in the first half, Brown was 1 of 12 in the second half, including two turnovers. Matthews and Bey each made 3 of 10 shots in the game to finish with 12 and 10 points respectively.

Undoubtedly, the Huskies will spend several weeks – if not a lifetime – second guessing their last-minute offensive meltdown as well as an unusual season that was muddled in mediocrity and vastly improved from 5-21 the year before.

They had a COVID-19 outbreak that postponed two games and canceled their cross-state matchup against No. 1-ranked Gonzaga. They went 5-5 against nonconference teams.

They started 8-4 start in the Pac-12 before losing four straight and finishing the regular season on a 3-1 run.

The late-season surge gave Husky fans hope that Washington could extend the season another day until the shots stopped falling at the end.

“Tough game,” Hopkins said. “We knew it would be a dogfight. Felt like we came out and played really tough. Was able to get the halftime lead.

“Second half, it was like being in a mud-wrestling match, just going back and forth. Had some opportunities to win down and just didn’t make enough plays. Tip our cap to USC. They made the plays they needed down the stretch.”

The loss begins what is sure to be another busy offseason for Hopkins who will have to replenish a roster that consists of nine players who participated in Senior Night celebrations last week.

Replacing Brown and Daejon Davis, a pair of graduate transfers who have exhausted their eligibility, will be a top priority.

Still, the most pressing personnel questions involve seniors Matthews and Bey who have a chance to return because the NCAA granting players an extra year of eligibility due to COVID-19. Roberts, a redshirt junior, has also said he’s undecided on returning to UW.

“We were 5-5 and everybody was doubting us,” Hopkins said. “And these guys came together and gave, I think, it was the second-most wins we’ve had here in five years.

“To win one game (at the Pac-12 tournament) and take a really good USC team to the mat at the end, I tried to tell the guys, obviously it’s not the end of the season. Hopefully we can get an NIT bid and play in the postseason.”