Washington men’s coach Mike Hopkins said more than once Sunday that this basketball season is “all about the kids” — providing them what he called “a sense of normalcy” when the rest of their lives are anything but normal.

“Getting on that court again, a place they love to play, and compete,’’ he said.

And that’s where the Huskies finally found themselves Sunday — on the same court in Las Vegas, in fact, where their season ended in March when the Pac-12 tournament was abruptly called off in the early stages of the COVID-19 crisis.

It’s tempting to say, “Be careful what you wish for,” because the Huskies were predictably outmatched and blown out, 86-52 by Baylor, the No. 2-ranked team in the country. 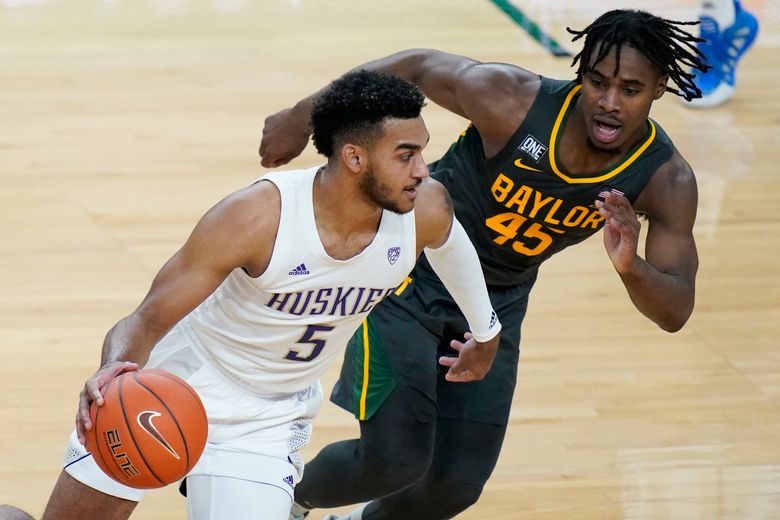 But to Hopkins, it was a jumping-off point, a valuable measuring stick to learn just what separates the NCAA elite from those seeking to reach that level. After weeks of drilling in the gym, and watching potential openers slip away, because that’s the way it goes in 2020, the Huskies got a chance to see what they need to work on.

Spoiler alert: Just about everything. A Huskies team Hopkins has characterized as more reliant this season on its three-point shooting made just five out of 24 of them. A team he hoped would be dynamic up and down the court was jittery and out of rhythm virtually from the start in falling behind 25-5. A team that needs to hold its own on the boards to make it all flow was outrebounded 50-19.

“We’re veteran at certain spots, but we’re also very new at a lot of spots, too,’’ said junior guard Jamal Bey. “It’s growing pains, for sure.”

To put it more charitably: There’s nowhere to go but up for this season’s Huskies. It’s certainly not panic time. Baylor is going to make a lot of teams look bad. The Bears have considerable talent back from last season’s 26-4 team that might have wound up in the Final Four, had there been one. And they have a shot this season, too.

One of those Baylor losses, if you’ll recall, was against Washington in the Huskies’ season opener in a tournament in Anchorage. It did not turn out to be a harbinger of great things to come, with the Huskies losing 15 of their last 20 after a 10-2 start. They wound up last in the Pac-12 and are predicted to be near the bottom again.

That upset came after a normal lead-up to the season in which the Huskies had time to focus on Baylor and prepare accordingly. (They also had two future first-round draft picks in the lineup, which certainly helped).

This year, the Huskies have players in new roles, a revamped team that’s trying to figure out how to play together. To do so on the fly against a team the caliber of Baylor is a recipe for exactly what happened. The key for the Huskies — who may or may not play Utah on Thursday, because … 2020 — is to adhere to the acronym Hopkins says he preached to them: DMGB.

Hopkins listed off a litany of their miscues Sunday, led by the inability of Washington’s guards to crash the boards. Instead, they “leaked out,” in his words, and allowed Baylor second, third and even fourth efforts. In general, the coach thought the team looked tight and a bit nervous in its opener.

“Usually, in past years, you get a couple exhibition games, you kind of see what you’ve got,’’ Hopkins said. “Our exhibition game was a real game against the No. 2 team in the country.

“We wanted to play the game and it was a great opportunity. It reminded me a lot of our first year when we played Virginia Tech in the Garden and they beat us by 39 points (actually by “just” 24, 103-79), and they made 15 threes. Two weeks later, we were able to come back and play Kansas exceptionally well (in a 74-65 victory over the second-ranked Jayhawks), and beat Arizona (ranked ninth, 78-57).”

We’ll see if such a resurgence awaits this Husky team. Hopkins noted, accurately, that the weird start to the season, replete with cancellations, postponements, and hastily scheduled makeup games, has led nationwide to “awkward scores or awkward play.”

Awkwardness was certainly the Huskies’ constant companion Sunday in Vegas.

“Sometimes when you get a chance to get a game like this, and I’ve been a part of a few of them, it’s all about how you respond,’’ Hopkins said. “Hopefully, we’ll respond with a standard of excellence and togetherness.”

At least on Sunday the Huskies got an up-close look at what those traits look like in action.