The benefit of hindsight illuminates what was blatantly obvious four years ago.

If newly hired coach Jody Wynn was going to have any kind of early success with the Washington women’s basketball team, then it was imperative that she convince freshman star Aari McDonald to remain with the Huskies.

However, two months after Wynn’s arrival on Montlake, McDonald left the program and transferred to Pac-12 rival Arizona.

Wildcats coach Adia Barnes, a former UW assistant under Wynn’s predecessor Mike Neighbors, promised McDonald would be the lead architect in a reclamation project and the focal point in an up-tempo offense.

It was an appealing pitch considering the 5-foot-7 point guard spent the previous season in the shadow of Kelsey Plum, the NCAA all-time scoring leader who led the Huskies to three straight NCAA tournaments.

Meanwhile, Wynn promoted a family-style atmosphere along with her husband Derek, UW’s lead assistant, and often referred to herself as a “Mama Bear.” She believed in a defensive-oriented brand of basketball devoid of stars in which literally anyone on the roster could start at any given time.

During her first year at UW, Wynn rolled out 25 different lineups while the Huskies stumbled to a 7-23 finish.

To be fair, Wynn inherited a depleted Husky team that lost a pair of All-Americans in Plum and Chantel Osahor, UW’s all-time leading rebounder, as well as senior forwards Katie Collier and Heather Corral.

Wynn scrambled to assemble a four-player incoming freshman class and nearly kept the roster intact. McDonald was the only UW player who immediately transferred, but she was the person the Huskies needed the most.

Four years later, McDonald was the Pac-12’s Player of the Year, and No. 3 seed Arizona claimed a berth to the NCAA tournament – 16 years after its last appearance – on the same day Washington dismissed Wynn. 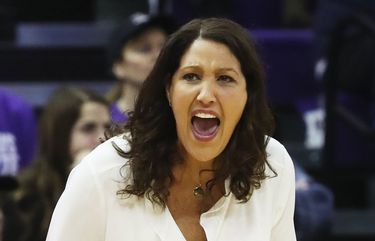 “It was a big day for our program,” McDonald said. “We hadn’t been to the tournament in 16 years. It’s a blessing. We’re never going to forget this moment.”

McDonald, who led the Pac-12 in scoring the past three seasons and twice won the league’s top defensive award, has been at the forefront of the Wildcats’ resurgence.

“It’s just crazy when I look back to a couple of years ago when we had these conversations,” McDonald’s said. “It’s a lot of trust in those conversations and just our relationship. We literally spoke it into existence, and now it’s happened.

“We put in the work. We got great players around me, and it’s finally happening. So, what now? We got to show out.”

It’s impossible to say with certainty how McDonald’s career would have unfolded with the Huskies, but theoretically she would have paired with guard Amber Melgoza, UW’s eighth all-time scorer, to comprise a formidable backcourt.

Conceivably, McDonald, who is projected as the No. 8 pick in this year’s WNBA draft, could have given Wynn and the Huskies time to find their footing in a competitive Pac-12 recruiting market.

On the men’s side, UW coach Mike Hopkins, who was hired a month before Wynn, lost seldom-used reserve Matthew Atewe while retaining the top returners who led the Huskies to a 20-12 record in 2017-18 and 26-8 mark in 2018-19 before the team’s recent two-year downturn.

To be sure, Wynn’s 38-75 record and .336 winning percentage – the lowest in UW history – are the main reasons she’s no employed at Washington.

However, losing McDonald was the first of several off-court missteps for the former UW coach who sometimes didn’t fully embrace the program’s rich history.

While it’s inaccurate to suggest Wynn alienated UW alumni, several former players, particularly those who played for Neighbors, said they received a frosty reception during her regime.

Three years after her final UW game, Plum became a frequent visitor during offseason workouts at Alaska Airlines Arena, saying, “I was giving the (new coaching staff) space to do their thing.”

Still, in September 2020, Plum accepted a graduate-assistant spot with Neighbors at Arkansas, where Osahor is an assistant.

Last summer, Wynn stepped on a public-relations landmine and issued an apology for a statement she made on racial injustice.

Wynn’s Twitter account was deactivated for a day and she issued an apology that read in part: “The thoughts and emotions that I was feeling were not properly conveyed as I tried to express my deep care and concern, and I know that my words were hurtful to people of color.

“I’ve learned a hard and important lesson in this moment and am committed to educating myself by first listening to our players, alumni and the entire community on how we can best create change. Real change.”

Despite Wynn’s dismal coaching record and off-court transgressions, there’s a strong argument to be made that Washington athletic director Jen Cohen should have given her one more year considering she had two years remaining on a six-year, $1.95 million deal and had secured a top-16 ranked recruiting class for next season.

As one Pac-12 insider noted, “I don’t know how you can fire anyone after a season like this when everyone is dealing with COVID. Clearly, they were already considering going in a different direction or somebody became available that they really liked.”

After replacing Jackson, the Huskies began a six-year streak in which they won at least 20 games while making three NCAA appearances and three WNIT trips.

Presumably, UW’s next coach will avoid Wynn’s missteps and return the Huskies to a position of prominence within the Pac-12.