HONOLULU — No. 21 Washington returned to Seattle following a six-day stay in Hawaii that included a second-place finish in the Diamond Head Classic.

Here are three impressions of the Huskies (10-3) before the start of Pac-12 season next week. 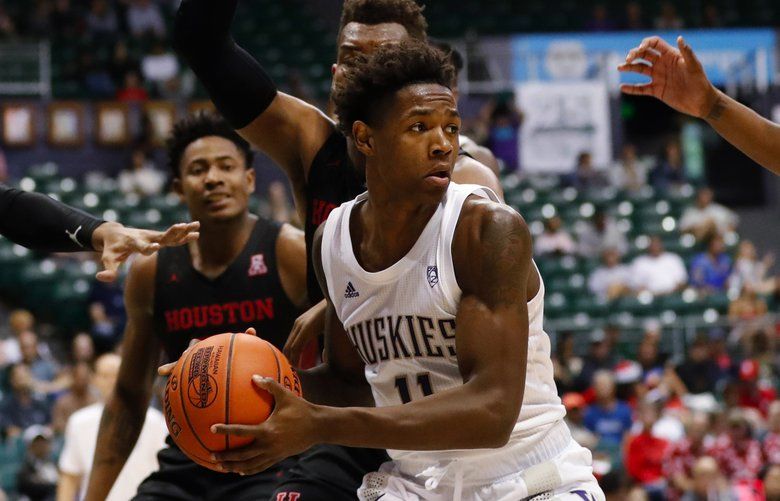 More than a third of the way into the season, the precocious freshman forward has met the lofty expectations that preceded his Montlake arrival and is generating conversations of whether he’s the greatest to ever play at UW.

It’s premature to compare Stewart with the likes of Brandon Roy, Isaiah Thomas and Bob Houbregs, but the 6-foot-9 phenom is pushing Markelle Fultz for most talented freshman in Husky history.

As the No. 1 scoring option, Stewart has tallied at least 12 points in every game and is the lone consistent offensive option on a team seemingly loaded with firepower.

Coach Mike Hopkins called out other UW players following Wednesday’s 75-71 defeat to Houston when he said: “The other guys on our team, we’ve got to step up. We got some good opportunities and we missed some easy shots. At the end there were some hustle plays, second-chance baskets, full clocks, dribble penetration that we just can’t allow to happen.”

Junior guard Nahziah Carter broke out of a three-game slump and finished with 15 points on 6-for-9 shooting, which included three three-pointers. And Quade Green chipped in 11 points and seven assists.

However, the rest of the supporting cast struggled at different times.

Most notably, Jaden McDaniels virtually disappeared in the second half after a sensational first-half performance included 10 points on 3-for-6 shooting, which included two three-pointers and a gorgeous dribble-drive layup.

But in the second half, the freshman standout went scoreless while attempting just one shot and had one rebound and three turnovers in 15 minutes.

And Hameir Wright struggled shooting (2 of 9 from the floor and 1 of 7 on three-pointers), which detracted from one of his all-time best rebounding efforts. He finished with seven boards — one shy of his career high.

McDaniels and Wright are the X-factors on this team. When McDaniels plays like a projected NBA lottery pick and Wright makes outside shots, then UW is a difficult team to beat.

Inexplicably, Hopkins has chosen to rely on a six-man rotation that includes heavy usage of backup guard Jamal Bey.

At times, sophomore guard Elijah Hardy sees time when Hopkins wants ball pressure in the man-to-man defense. And senior forward Sam Timmins is capable of providing Stewart a few minutes of relief as a reliable substitute in the middle of the zone.

However, no one else has been included in that circle of trust.

It’s unclear why Hopkins hasn’t given more opportunities to sophomore forward Nate Roberts, who could have helped with rebounding against Houston. And not sure why freshman sharp-shooter RaeQuan Battle doesn’t get shots when UW struggles with its perimeter attack.

Each of UW’s starters played at least 32 minutes against Houston, led by Wright who logged 36.41. That’s a heavy load.

It seems unlikely that Hopkins would suddenly expand the rotation this late in the season. If he didn’t play reserves during home games versus San Diego and South Dakota then he’s likely not going to put them on the floor on the road at Arizona or Colorado.

Still, it’s a curious gamble to rely on just a handful of players.

No one is taking away Hopkins’ two Pac-12 Coach of the Year awards. He won those honors for reviving a moribund UW team and guiding the Huskies to a Pac-12 regular-season title in 2018-19.

But it’s easy to forget Hopkins is still a third-year coach with just 92 games on his resume, including time as an interim coach at Syracuse.

So it’s not surprising when Hopkins and the Huskies come up short against veteran coaches like Tennessee’s Rick Barnes (1,067 games), Gonzaga’s Mark Few (705) and Houston’s Kelvin Sampson (951).

Hopkins, 50, spent 22 years as a Syracuse assistant, but his maturation as a head coach will be a developing story.

He’s rebuilt the Huskies in his image. He brought in the greatest recruiting class in UW history. He has three former McDonald’s All-Americans on the roster, which is also a first for Washington.

Hopkins has astutely installed the man defense as a change-up to his beloved 2-3 zone. He adroitly switched to the man on Sunday, which sparked UW’s win over Ball State.

Perhaps fatally so, Hopkins didn’t opt for the man defense in the second half on Wednesday when Houston destroyed Washington on the offensive glass.

Admittedly, Hopkins “coaches by my gut,” which is to say he reacts instinctively to situations.

For two years, it’s worked wonderfully for Washington, but every now and then we’re reminded that Hopkins is still relatively new at this.