Before departing for the Pac-12 tournament in Las Vegas and playing perhaps their last game together, Amber Melgoza made sure to carve out some quality time with Husky teammates Mai-Loni Henson and Gigi Garcia.

They spent Sunday dining at a popular Thai restaurant near campus and ended the night with bubble tea and Boba Smoothies.

“We were there for almost 3½ hours,” Melgoza said, smiling. “Just talking about life in general, this past weekend in Oregon, the week before and winning those (home) games. We talked about when we were freshmen and our personal lives. 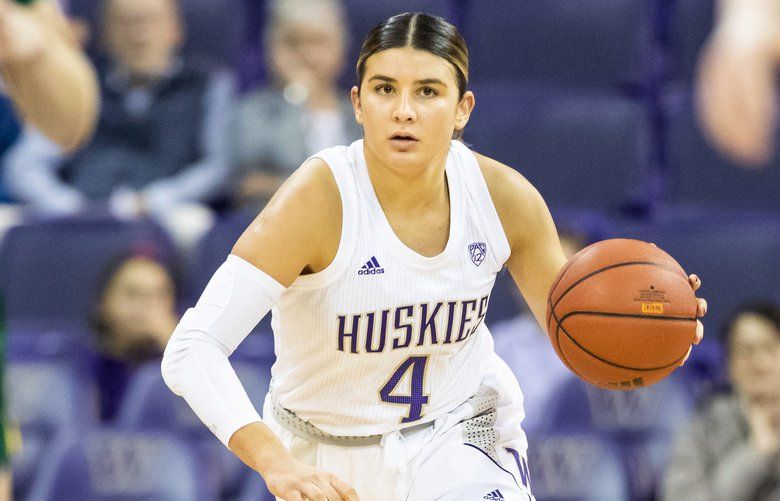 Depending on what happens this week, Melgoza is nearing the end of a spectacular career that includes notable individual achievements.

It was the first of two emotional upsets for Washington, which advanced to the semifinals in 2019.

Can the Huskies do it again?

“Oh yeah, I know we can, but I really don’t even want to talk about last year,” Melgoza said. “That was a whole different team than who we are now. We have people who never really experienced that like Haley (Van Dyke). T.T. (Watkins) wasn’t there. Rita (Pleskevich) wasn’t there. Quay (Miller) wasn’t there.

“The one thing I tell them is to embrace it. This is a really cool experience. … Just be fearless.”

Growing up in Santa Barbara, California, she started racing in BMX competitions when she was 5.

And soon after, she played running back for the Viejo Valley Elementary School flag-football team while in the fourth and fifth grades.

“I’ve always been the person to try something new,” said Melgoza, an avid wakeboarder since she was 17. “I’m not really afraid. You just go to try it and if you don’t like it, then you don’t like it. The worst thing in the world is to let your fears prevent you from every trying something.

“Whether it’s flag football, BMX, riding motorcycles or wakeboarding, it’s always kind of been like an adrenaline rush that I love.”

The 5-foot-9 senior point guard plays basketball with a similar enthusiasm and passion. She’s been a relentless daredevil who climbed into ninth place on Washington’s all-time scoring list with a hard-charging approach.

“I’ve never broken a bone,” she said while knocking on the hardwood floor at Alaska Airlines Arena. “But I take a lot of ice baths before and after every game. And massages. I need them.”

In Pac-12 games, her scoring average increased to 18.9 points despite being the focal point of opposing teams.

“It’s cool that people want to lock me down,” she said. “Go for it. I’m always up for the challenge. I feel like every single game I always have two people on me. I’m pretty much used to it.”

Melgoza was a freshman when the Huskies posted a 29-6 record and advanced to the Sweet 16 in 2017 under former coach Mike Neighbors.

When he left and Washington hired Jody Wynn from Long Beach State, Melgoza never considered transferring partly because she had a prior relationship with the incoming coaching staff that recruited her in high school.

“I knew Jody so that was part of it, but the thing that made want to stay here was those girls Mai-Loni and Gigi,” Melgoza said. “We wanted to keep it going.”

Over the past three seasons, the Huskies comprised a 31-64 record while failing to adequately build a supporting cast around Melgoza, who is the only UW player to average double-digit scoring during that span.

Still, Melgoza has no regrets and plans to pursue a professional basketball career after graduating in June with a communications degree.

“Everybody wants to win, but you also have to be grateful for the opportunities that you have,” she said. “Just the amazing connections I’ve made and the people that I’m surrounded by, I’m very grateful for all of it.”

Melgoza counts Washington’s Cinderella run to the Pac-12 tournament semifinals last year as one of her favorite moments and savors the chance to finish her career on a similar high note.

“We’ve got to focus one game at a time,” she said. “This is not going to be a fun trip. It’s a business trip. They’re going to want to beat us as much as we want to beat them.