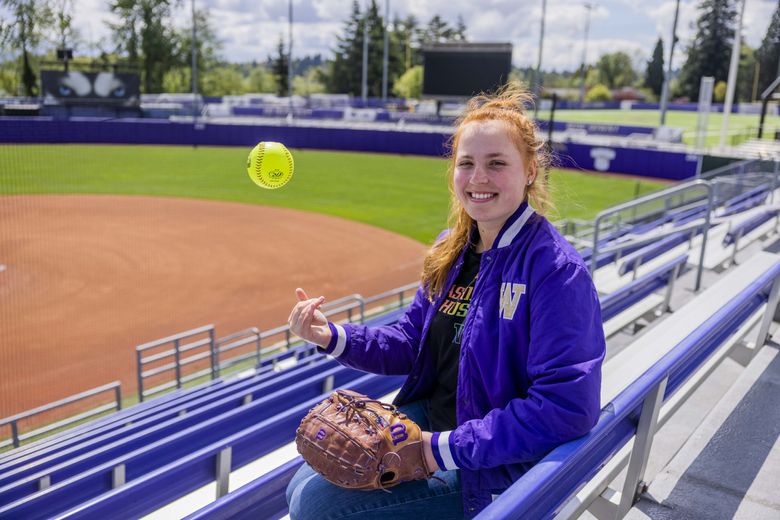 Gabbie Plain at Husky Softball Stadium at the University of Washington in Seattle on May 10, 2022. Plain is a pitcher for the softball team at UW and is a 2020 Olympian. (Daniel Kim / The Seattle Times)
By
Scott Hanson
Seattle Times staff reporter

It would take paragraphs to list Gabbie Plain’s accomplishments and awards during her five seasons as one of the best players in the history of the Washington softball program.

But for all her success on the pitching mound the past five seasons, that’s not what teammates talk about when describing her. They talk about her almost constant smile, her upbeat attitude, the way she carries herself — never seeming to get rattled — and how much fun she is.

“There is a lot that makes Gabbie special,” UW senior pitcher Pat Moore said. “Her happiness and steadiness, and I just feel so confident when I am around Gabbie. Whether she is on the mound or in the dugout, she’s giving our team confidence, with just her presence. She really is so cool.”

That presence, they say, will be missed as much as the stats when Plain wraps up her Husky career.

That certainly is not happening yet. Plain, a two-time first-team All-American who played for Australia in last year’s Olympics, will be honored along with Moore on Saturday at Senior Day, when the Huskies host Arizona State in their final regular-season game.

The Huskies will undoubtedly be in the NCAA tournament and will likely be a host for the first two rounds. So the final act of Plain’s story with the Huskies is to come.

No matter what happens, Plain’s legacy at UW is secure. She has baffled hitters for years, not with overwhelming velocity, but by using multiple spins and putting the ball right where she wants it.

“Originally I was, ‘Washington, that’s right below Canada, and that’s going to be freezing,'” she said. “That’s what was happening in my head. Coming from Australia, I’m like, ‘No way.'”

She eventually warmed up to Seattle and UW, and is glad she did.

“I will have memories and friends for the rest of my life, and I will come out with an amazing degree,” she said. “It’s been an incredible experience.”

There is a lot that makes Gabbie special.

The long road to UW

Plain enjoyed playing catcher growing up in Harrington Park, Australia, “but my knees weren’t thanking me.” That led her to give pitching a try. It was no instant success, but she kept at it.

“My first year pitching was not great,” she said. “I think I pitched one inning and I hit two people and walked the rest of them before I finally managed to get out of the inning. The next year was a little better. From that point onward, it was just slowly progressing.”

Plain learned to spin the ball from her first pitching coach; she started perfecting it by working with her father, Jason.

“For two years until I was about 15, it was mainly just me and him,” Plain said. “We would go down to the park and we would test out different things, like, ‘How does it feel to throw with this grip or that grip? Let’s see if we can figure out how to get (the ball) to cut up and down.'”

She began to have enough success that playing collegiately in the U.S. became a possibility. Washington was not on her radar until one day at a tournament her father struck up a conversation with an opposing player’s mother, who happened to be a UW alum.

“What really stuck with him was she kept mentioning Washington and how she really enjoyed it, how her experience was amazing, and it was so pretty,” Plain said.

Her initial attitude toward the state was not positive, but that changed after she did some research, and she sent emails introducing herself to UW coach Heather Tarr and her staff.

“It is good when you answer your emails,” said Tarr, who was impressed with the spin on Plain’s ball in the video the pitcher sent. “Lucky for us, we answered the email.”

About a month later, Tarr went to see Plain play in Hawaii to “confirm” what she had seen on video. Having done that, Tarr offered Plain a scholarship, but she was not ready to accept, having set up a visit with Arizona.

The next month was a nervous time for the UW coaches before Plain accepted Tarr’s offer, believing it was the best option for softball and academics.

“My parents are both academics — my mom (Karren) is a (research) scientist and my dad’s a math teacher — and education is a very important aspect of my life as well,” said Plain, who is finishing up a degree in psychology and has a 3.7 grade-point average.

Said Tarr: “In the end, she picked the right school.”

A star from the start

Plain did not know what to expect from herself as a freshman.

Tarr wondered how Plain would adapt to new pitching mechanics to adhere to NCAA rules that are different from what Plain was used to in Australia. That included no longer being able to leap off the ground on pitches.

The transition to college was seamless. Relying on an array of spins — up, down and curve — Plain went 22-5 as a freshman in 2018 with a 1.01 ERA and teamed with fellow pitching star Taran Alvelo to help lead UW to the title series in the Women’s College World Series, where the Huskies lost to Florida State.

Plain was a third-team All-American as a freshman and the awards and the smiles have continued.

“It just becomes easier and easier if you’re having fun and are relaxed and loose,” Plain said.

With a career record of 106-18 and 1,039 strikeouts entering Friday’s game against Arizona State, Plain ranks No. 2 in career wins and strikeouts at UW, trailing Danielle Lawrie (2006-10) in both categories. 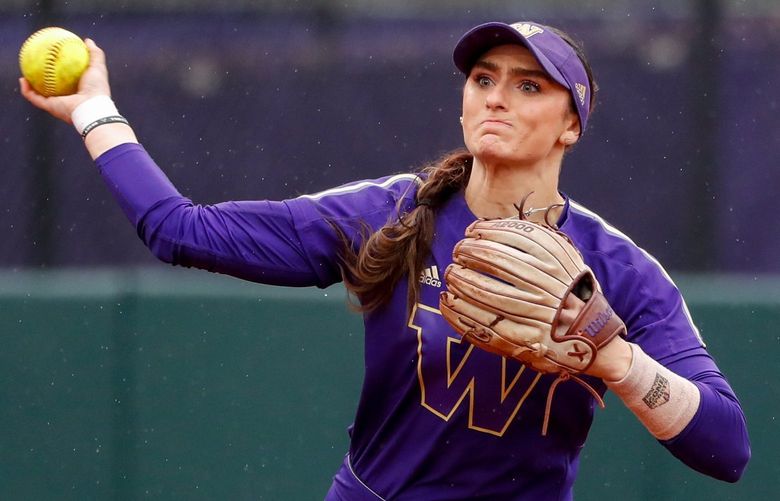 UW softball’s Baylee Klingler has mashed this season. Here’s a look at just how good she’s been.

Plain said she has not thought much about her legacy at UW, but her teammates say she is leaving a lasting mark.

“Her spin, you won’t find it anywhere else, and her command is ridiculous,” Moore said. “But what really makes her someone who has been great at UW, and who will be great post college, is how she holds herself on the mound.

“I have never seen her truly rattled in a game. There are situations where most pitchers would get stressed, but Gabbie is calm and collected. It really makes her special. … And she does not present herself, like, ‘I’m Gabbie Plain.’ That’s also what makes her so amazing. She doesn’t have an ego that can get in the way of her just being Gabbie.”

Plain has made a point of helping the team’s younger pitchers.

“She teaches pitching, and the game in general, in such a kind, supportive, encouraging and nurturing space,” junior pitcher Brooke Nelson said. “It has been really great to pick her brain. She is always open and honest with any of us. It’s in how she handles failure that I have learned the most from her. It’s not how the last pitch was, it is how you respond.”

Said shortstop Baylee Klingler, who was named Pac-12 player of the year this week: “I have so much respect for Gabbie in that she is willing to do whatever is needed for the team. No matter how she is feeling, good or bad, she is just consistent Gabbie. She’s a great teammate, and an amazing pitcher, obviously, but also an awesome person.”

Her spin, you won’t find it anywhere else, and her command is ridiculous.

Plain’s immediate goal is to try to help the Huskies get back to the Women’s College World Series for the first time since 2019, when UW lost to UCLA in the semifinals.

She would like to continue to play softball after college, “and try and get to as many places and experience as many things as possible,” before beginning a career in neural psychology.

One possible option is the Athletes Unlimited league that begins in late July and is being held outside Chicago. Plain is one of 13 current NCAA players who were drafted by the league earlier in the month but has not decided if she will participate.

Either way, Plain’s departure from UW will leave “a huge hole,” Tarr said.

“It has been great to have her, and there will never be another one like her,” Tarr said.

How would Plain like to be remembered at UW:

“Mostly as just a good teammate, and someone who was just enjoying themself and had fun. That’s pretty much been my biggest thing over the past few years is just enjoying the game. It doesn’t matter how stressful it gets or anything like that. Everything else is a bonus.”

Career highlights: Pitched in two games for Australia in the 2021 Summer Olympics in Tokyo … two-time first-team All-American and was third-team All-American once (this year’s team has not been announced). … Four-time all-Pac-12. …. Has thrown six career no-hitters and two perfect games, ranking No. 2 in UW history in both categories. … Threw back-to-back no-hitters in 2019. … Has been named Pac-12 pitcher of the week nine times.

Did you know? She has made the Pac-12 Academic Honor Roll the past three seasons.