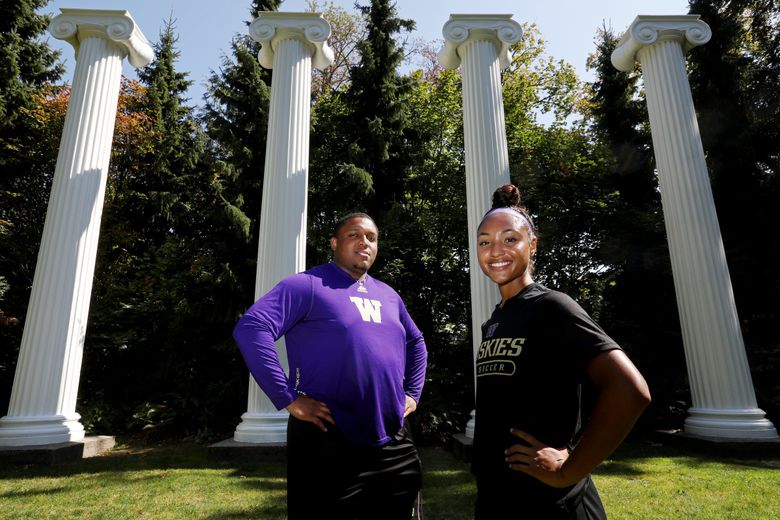 Elijah Mason knew something was different almost immediately after he stepped off the plane at Seattle-Tacoma International Airport.

It wasn’t the lack of sun, which set Seattle apart from Mason’s old stamping grounds in Casa Grande, Arizona. And it wasn’t nerves, which any freshman, especially one almost 1,500 miles from home, might have.

“It was substantially more white than I was expecting,” he said.

Arriving in fall 2018 as a throws athlete for the Washington track and field team, Mason knew it was going to take time to settle in. He quickly realized the most difficult obstacle he faced was isolation.

Everything changed for Mason when he began going to meetings for the Black Student-Athlete Alliance.

Created to provide a comfortable space for Black student-athletes at UW, BSAA helps its approximately 40 members combat feelings of loneliness, seclusion and solitude.

The sports world was reawakened to the topic following tennis superstar Naomi Osaka’s decision not to compete in the French Open a few weeks before the Olympics. Gymnast Simone Biles, arguably the most recognizable American Olympian of her generation, withdrew from the team competition after stumbling on her first vault rotation, citing her mental health as the reason.

Olympians aren’t the only athletes affected by mental-health issues. The pressures and isolation of being an athlete, and especially a Black athlete, impact people at all levels of their sports.

That includes NCAA student-athletes such as Mason, but the UW thrower found what he was looking for in the BSAA — a community.

“It was the best decision I’ve made so far,” he said. “That was how everything started for me.”

The idea to create a support group for Black student-athletes at UW had been floated since early 2017, and BSAA got off the ground in the fall quarter of that year when two UW student-athletes, Michaela Nelson, a member of the gymnastics team, and Channing Nesbitt, a pitcher for the baseball team, began organizing meetings.

Guided by former UW women’s soccer player Havana McElvaine, who had attended the Black Student-Athlete Summit the year before, Nelson and Nesbitt wanted to create a safe place for Black student-athletes to build a community where they could express themselves and discuss their unique experiences.

“The biggest thing about this space is just having someone to talk to, really,” Mason said. “A lot of us come from spaces where — whether it’s our families, our churches or our sports teams — where in our daily lives we get to see other Black people. But when you come to this space and you’re the only Black person in hundred-person classes, you start to ask, ‘Why is that?’ ”

Part of Mason’s problems stemmed from struggling to find other Black classmates to befriend outside of the UW athletic department. Only 1,844 of UW’s 47,392 students — 3.9% — identified as Black in 2018.

The two-time Pac-12 discus champion’s feeling of isolation was also exacerbated by his class schedule, which either gave him lectures early in the morning or late at night to accommodate for his practice, severely limiting his chances to interact with other Black students. His experience wasn’t unique.

Nelson’s description is the exact situation Mason found himself in upon his arrival at Washington. For his first three years on Montlake, the Arizona native was the only Black athlete on the men’s side who did throws.

When he did meet other Black students on campus, Mason struggled to connect. Before coming to Seattle, most of the communities he had interacted with were multigenerational, with ancestry going back hundreds of years in America. At UW, many of the Black students he interacted with were from families who had recently immigrated, with deep cultural connections and knowledge of Africa.

While Mason was fascinated by these communities, they weren’t able to give him the support he was seeking.

Once he began attending BSAA meetings, Mason was able to open up. Early on, meetings were kept small, with just a few core members as Nelson and Nesbitt tried to create strong relationships to build a steady foundation.

They held game nights and barbecues, producing an environment where Black student-athletes were able to discuss anything — venting about microaggressions, finding a local barber or hair stylist, and recommendations for Black-owned restaurants in the area — all of which helped Mason finally gain the sense of comfort he’d been missing.

Maya Washington, another former UW gymnast who served as an early board member for BSAA and eventually co-president of the organization in 2019, remembers the group feeling like a breath of fresh air.

“If you’re not surrounded by people who look like you, it’s hard for you to feel like you fit in,” she said. “You kind of always feel like an outsider, so I think that BSAA, this space, is so important because it gives you an actual sense of being with people that are like you.”

If you’re not surrounded by people who look like you, it’s hard for you to feel like you fit in.

Despite its roots as a social club, the BSAA has grown since its inception. Nelson, Nesbitt and Washington graduated, and former co-president Ty Jones transferred. Three years after joining the group, Mason found himself in a leadership role, taking over as co-president with Washington women’s soccer player MaKayla Woods.

The BSAA has also expanded its range of resources. In the past year, it has started a mentorship program with former Black UW student-athletes, including ex-pro basketball player Traci Thirdgill and former football players Lavon Coleman and Deontae Cooper, among others. The BSAA also tries to create networking opportunities and develop relationships with programs designed to help student-athletes prepare for the next stage of their lives after college sports.

It is doing more to expand its presence on campus, too. Woods said she believes Black student-athletes can come across as distant, aloof and detached to other Black student organizations, when in reality they’re simply too busy or their schedules don’t align.

To bridge the gap between the experience of Black students and Black student-athletes, the BSAA is trying to organize events and foster connections with other Black student organizations at UW. The group also hopes to build bonds with BSAAs at other schools in the Pac-12, and eventually across the country.

The BSAA isn’t alone. Mason and Woods said the UW athletic department has been open and supportive in helping it grow the organization. In particular, BSAA members mentioned the efforts of Associate Athletic Director for Diversity, Equity and Inclusion Sheridan Blanford, who has instituted climate surveys for the members of UW athletics, which allow all student-athletes to express opinions and concerns about their environment.

The athletic department has also encouraged its coaches to be open and engage with the BSAA, culminating in a meeting between the group’s board members and all of Washington’s head coaches in the fall of 2020.

Although this is such a frustrating and really hard time, it’s making it a lot easier for our voices to be heard because people want to hear our voices.

Woods said the meeting was productive, with all the coaches interested in supporting and helping the organization continue to expand. She also thinks having the support of the entire athletic department, especially football coach Jimmy Lake, the only Black head coach at UW, has helped with recent recruitment.

“It’s one thing to hear information from somebody who’s in a higher position,” she said. “But to have that person look like you, and have that person kind of understand the things you go through, I think that really has encouraged athletes to really listen and I think that’s really cool.”

UW’s encouragement of the BSAA isn’t being taken for granted, either. Woods said her experiences with administrators have been in stark contrast to those of her friends at other schools, even within the Pac-12.

Having the support of the athletic department has also allowed the BSAA to become more vocal. Following the summer of 2020, after the killings of George Floyd, Breonna Taylor, and Ahmaud Arbery launched calls for social justice into the national consciousness, the BSAA has tried to help its members learn to use their platform as athletes.

The group doesn’t want to pressure its student-athletes to feel they have to speak out if they’re not comfortable, but also hopes to support its members to advocate for themselves. For example, the BSAA supported the #WeAreUnited Movement after Pac-12 athletes banded together to show unity in August 2020.

“Although this is such a frustrating and really hard time, it’s making it a lot easier for our voices to be heard, because people want to hear our voices,” Woods said. “That’s something that has been a positive in this horribly negative situation.”

But just as the group began to hit its stride, the BSAA hit another obstacle. The COVID-19 pandemic made it harder to recruit, and ended the possibility of having in-person meetings. Despite the difficulties Woods estimates they have around 40 members of varying activity levels, and believes the BSAA will get a participation boost once members can see each other outside a Zoom presentation.

Keeping this space growing is incredibly important. As much as the group wants to expand the resources it can offer Black student-athletes at Washington, its core purpose will always be to continue supplying a place for its members to be comfortable and heard — especially so freshmen, like Mason all those years ago, won’t have to feel so isolated.