Washington’s softball team has become as reliably dominant as any program on campus, and here the Huskies are again, poised to seriously contend for a national title.

They are so loaded with hitting that coach Heather Tarr’s biggest challenge might be finding spots on the diamond for all the potent bats. Gabbie Plain, ascending to unequivocal ace with the graduation of Taran Alvelo, is on a short list of the best pitchers in the country. Shortstop Sis Bates is a defender without peer. Catcher Morganne Flores, with 23 homers last year, is one of the leading returning sluggers. And here comes another loaded freshman class, led by the nation’s No. 1 recruit, pitcher/first baseman Kelley Lynch.

Talk to the players, and they’ll say the Huskies’ success — they are ranked No. 1 and No. 2 in the two major preseason national polls — is as dependent on the culture built by Tarr as the never-ending supply of talent she brings in. 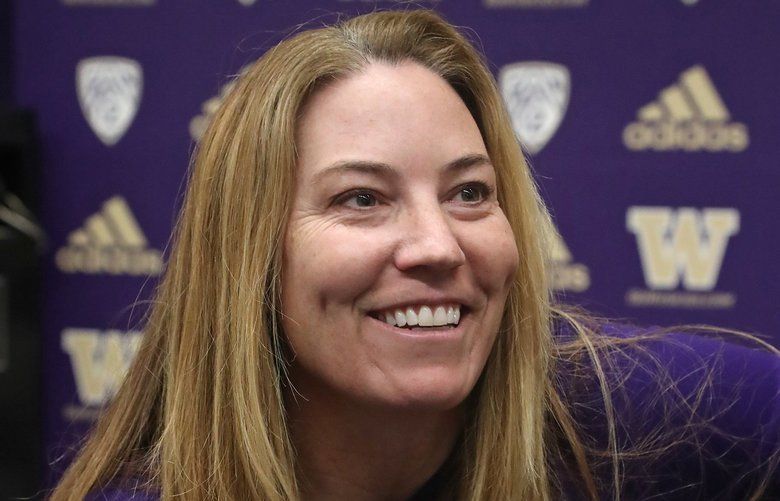 No. 1 Husky softball has reason to be excited with season set to begin

To Tarr, that’s where the thrill of coaching is first manifested, and the roots of their on-field success are established. She has led the team to three consecutive trips to the Women’s College World Series, with a runner-up finish two years ago and an extra-inning loss in the semifinals to eventual champion UCLA last year. Led by All-American pitcher Danielle Lawrie, the Huskies won the only title in program history under Tarr in 2009.

Steeping the players in the lore and accomplishments of the program is something Tarr takes seriously. Before a player is issued a jersey, they must learn about the players who wore the number before them. Bates says the continuity is a powerful force.

“We’re very intentful of sharing our culture and the past and present Huskies, and I think that’s why our program is so successful, because we know what happened before us, and we learned from that,’’ she said. “We just build as a unit every single year. We build relationships, and we’re going to have those for the rest of our lives. That’s why we’re special.”

Tarr is mindful of the fact that there is minimal opportunity to pursue the sport at a professional level, so the college years are almost certainly the apex of her players’ athletic lives. That’s why she throws herself each season into re-forming the ties that will both bind and elevate.

“Oh, I wish it was self-sustaining,’’ Tarr said. “No, actually I don’t, because that’s the beauty of being able to be in this role I’m in. To be able to provide people the platform to succeed beyond the pressure of life, of the moment, and to really live in and love every single moment we get together.

“I think especially as female athletes, you really know this might be the best thing they ever get to do as an athlete, and we want to help them just really be their most confident, durable selves, but then also allow them to understand that’s going to help them beyond the college game.”

After being out of the last two Olympics, softball returns for this summer’s Tokyo Games, adding a surge of energy to all levels of the sport. The Huskies have two exhibition games against the U.S. squad, and once the Huskies’ season is done — which won’t be until early June in Oklahoma City, they hope — Tarr will rejoin the U.S. team as an assistant coach.

Bates has competed on the national team and attended the selection trials but was not named to the U.S. squad. Some observers believe that because of uncertainty over whether softball will be retained as an Olympic sport, team officials may have felt an obligation to veteran members of the national squad.

At any rate, Bates’ omission could serve as a motivator to a player who hit .387 last year and was named Pac-12 Defensive Player of the Year for a second time.

“For her to be even considered in that maybe top 18, she should fly like a kite,’’ Tarr said. “I think it’s important that she knows that she could be there. It was super disappointing; talking to her in the morning she got the decision was heartbreaking. It was sad.

“Of course, I’m a part of the staff. I support what it’s all about and what it’s for. But on the record, if it’s me picking, I pick Sis Bates on my team every single time.”

Bates’ absence from the national team is a boon to the Huskies, however. Defending national champion UCLA had two players selected, including their ace pitcher Rachel Garcia and slugger Bubba Nickles, who will redshirt this year in order to train with Team USA. So will Arizona catcher Dejah Mulipola, another Team USA selection.

Those absences helped the Huskies win the Pac-12 coaches poll as the preseason favorite in a conference that’s once again loaded with national contenders. Add in Washington’s lofty national ranking, and it’s no wonder Tarr says no one will overlook the Huskies this year.

“We’re not going to get anybody that takes a pitch off against us,’’ she said. “Throughout the entire season, nobody’s going to forget about us. We’re going to continue to evolve and grow ourselves and see how good we can be by the end of this whole thing.

“You earn it,’’ she added. “You earn the target on your back. And then you learn to embrace it.”

That’s become a part of the Husky softball culture, too.