The Pac-12 will conduct a football media showcase unlike any in conference history Friday at the Novo Theatre in Los Angeles.

With USC and UCLA bound for the Big Ten in two years and the conference fighting for survival, the fast-approaching 2022 season, which carries significant intrigue unto itself, will have to share the stage. 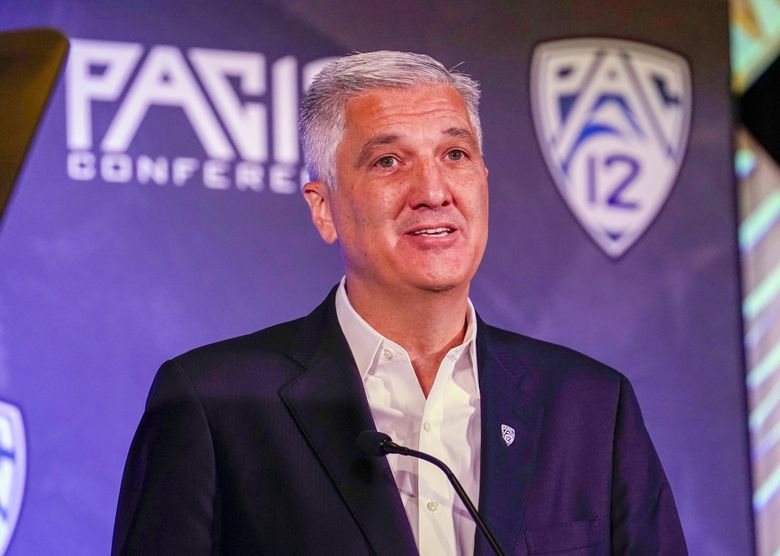 The top storylines to watch …

1. What will Kliavkoff say?

The second-year commissioner will offer his state-of-the-conference remarks at 8 a.m. with no shortage of topics to address.

We don’t expect any thunderous news on expansion, mergers, alliances or media rights contracts. It’s simply too early in a negotiation process that likely will last weeks, if not months.

But Kliavkoff assuredly will lend perspective on the key issues and attempt to frame expectations for the upcoming season.

Odds are, he’ll take the highest of roads with regards to the defectors, USC and UCLA, whose athletes must spend two years as children of divorce.

His counterparts in the Big Ten (Kevin Warren) and Big 12 (Brett Yormark) offered bold declarations of unity, prosperity and predation during remarks at their preseason media events — all of which served to minimize the Pac-12.

Kliavkoff hasn’t uttered a public peep since the Pac-12’s world changed on June 30.

In both tone and content, he must make the case Friday for a robust future worthy of the Power Five, which, as everyone knows, is really the Power Two and the Middlin’ Three.

We’re curious to hear Kliavkoff’s perspective on reports that the College Football Playoff could expand to 16 teams, not 12 — and how that might impact the Pac-12’s strategic position relative to the ACC and Big 12.

USC’s first-year coach figured to be the star of the event before the Big Ten move was announced, with a barrage of questions about leaving Oklahoma, USC’s playoff prospects, like in L.A. and a rebuilt roster featuring quarterback Caleb Williams.

Now, the Trojans’ future matchups against Ohio State and Michigan threaten to overshadow anything on the 2022 schedule.

It won’t be much different for UCLA coach Chip Kelly, whose standard zero-nonsense tact with the media will be pushed to the brink when he’s asked about road trips to Rutgers and Purdue.

The remaining 10 head coaches will attempt to espouse the virtues of their 2022 rosters while being grilled about the Pac-12’s next move and options for their programs.

Oregon’s Dan Lanning and Washington’s Kalen DeBoer are in unique positions as first-year coaches whose schools are hoping for invitations from the Big Ten.

At least for now, Lanning’s season opener against Georgia isn’t the top-of-mind issue for the Ducks.

Arizona State’s Herm Edwards, who carries the additional burden of an ongoing NCAA investigation, might be the only coach eager to field questions about the Pac-12’s survival.

Each team will be represented by its head coach and one player from each side of scrimmage.

The list includes just four quarterbacks but six offensive linemen — a sign of the times for a conference that has lacked star power at the skill positions in recent years.

In fact, one of the conference’s top returnees, UCLA quarterback Dorian Thompson-Robinson, won’t even attend. Instead, the Bruins are sending lineman Jon Gaines II.

But make no mistake: Quarterback play is one of the central themes of the 2022 season after a substandard showing by the collective in ’21.

At least seven teams will have new starters — all of them transfers: Arizona, ASU, USC, Cal, Oregon, Washington and Washington State.

Of those, only USC’s Williams and WSU’s Cameron Ward will be in attendance Friday.

Like their peers and the head coaches, they won’t be able to escape the specter of realignment.