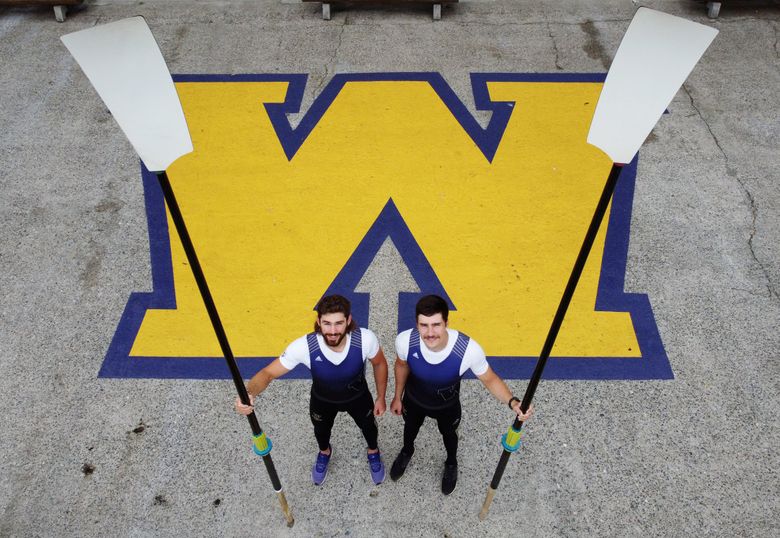 'It means everything' UW men's crew seniors stayed an extra year for a chance to win a national title. Now's their time.

University of Washington men’s rowers Austin Regier, left, and Sam Halbert, Thursday, May 20, 2021 in Seattle. The two are in the midst of training for the IRA National Championship Regatta. (Ken Lambert / The Seattle Times)
By
Scott Hanson
Seattle Times staff reporter

Michael Callahan said he feels less like a coach and more like a comrade to his rowers on the Washington men’s team.

That’s because his veteran team is so self-motivated, so laser-focused on making the boats as fast as possible, that it makes his job easy. The coach relies heavily on 17 seniors — including five who elected to return for a fifth year at Washington after last season was canceled due to COVID-19.

What they are striving to do is win the program’s 19th national title and first since 2015 — the final year of five consecutive titles — at the Intercollegiate Rowing Association championships at Mercer Lake in West Windsor, New Jersey, on Friday and Saturday. The Huskies have finished runner-up to Yale, which is not competing this year, in the past three national championships.

If UW wins, everyone on the team will share in the victory, not just the eight rowers and the coxswain on the winning boat.

Where: Mercer Lake in West Windsor, N.J.
When: Friday-Saturday

The IRA has a YouTube Channel, on which all of the racing will air live.

That is because of the team’s “bottom up” philosophy: Rowers work so hard that it pushes their boatmates and the rowers in boats above them to get better — lest they lose their spot to a rower in a boat below.

That’s why fifth-year senior Austin Regier from Burien, who is not on the first varsity eight boat, would celebrate a victory as much as Sam Halbert, a fifth-year senior from Woodinville High, who races in the bow on the top boat.

“One of the tenets is everyone contributes to the whole,” Callahan said. “Other programs put a lot of weight on that first eight, but we want to make sure everyone knows their efforts contribute to the success of the whole group. You can be in the fourth or fifth boat, but your job is to push the man, or woman, next to you, and make them better. It goes all the way up the chain.

“The top guys, their job is to lead the way. I believe the leadership of the team needs to be there, too.”

The leadership aspect is not a concern this season, not with so many veterans, and with rowers like Halbert and Regier and three others in their fifth season at UW: David Bridges, Felix Reinhold and George Esau.

“We realized early on (after rowers were given an extra year of eligibility) that the best recruiting we could do was retain the students we had developed over the years,” Callahan said. “We knew they would be hungry for it.”

Callahan called Halbert, asking him if he wanted to row another season while beginning a master’s program.

“Absolutely,” said the 6-foot-5, 215-pound Halbert, whose great-grandfather was a professional buffalo and bull rider. “It was a very quick and easy decision.”

Halbert’s journey to UW rowing started in the summer before seventh grade.

“Sammamish had a rowing program and it got me out of the house and my mom signed me up,” Halbert said. “I wasn’t very good at all, but I loved the people.”

“It was a great way to hang out with friends on the water,” he said.

Halbert got good enough that he was recruited by the Huskies. He didn’t have the credentials of some recruits — in level of competition or his performance on the rowing machine — but Callahan saw the potential in the hometown kid.

“The culture of the team is really driven by the Northwest guys,” Callahan said. “Of course, we want to get other strong rowers from around the country and the world, but I think those guys learn a lot from the guys who are from the Seattle area and the Pacific Northwest region.”

Halbert is the only rower from Washington in the men’s top varsity eight boat, but two are from Portland: Bridges and Pieter Quinton, a graduate transfer from Harvard.

“I love looking at the other boat and seeing those guys — all internationals — and I’m like, ‘I’m from Washington, I’m at Washington and this is my team.’ I love representing Washington.”

Halbert has been in UW’s top boat since the middle of his sophomore season, reaching the potential Callahan had seen, and helping lead the U.S. men to a gold medal in the eight at the 2018 U-23 world championships.

Halbert, whose master’s program is infrastructure planning and management, credits his success to working hard and listening to his UW coaches.

“If you trust what the coaches have to say and really listen to their feedback, anyone can pull it off,” said Halbert, who has a job offer from the Bellevue Fire Department. “I came in, not a top recruit, and really listened. It’s really buying into it and giving 100%.”

From runner to rower

Regier, who went to Mount Rainier High School in Des Moines, said part of the reason he came back was how things had ended in 2020, with the season getting postponed in March after the team had trained for months.

“It just felt so wrong to not come back,” said Regier, who spent 48 days last summer with teammate Reinhold working on a fishing boat in Alaska to help pay for another year at UW.

Winning the Pac-12 championship in UW’s four-plus boat, part of the Huskies’ five-race sweep, helped make it all worthwhile.

“We set the tone for the whole team,” Regier said. “I was so happy. Just a lot of joy.”

Regier was a runner in high school, a tall one (6 feet 3) and a good one, finishing seventh in the 800 in the state 4A meet as a senior. He had no rowing experience, so he attended a six-week learn-to-row camp suggested by UW’s coaches, which helped him make the team.

Regier worked his way to the third varsity eight boat this season before moving to the four-plus boat for the Pac-12 championships.

“He comes into this program going against guys who are under-23 world champions,” Callahan said. “Physically, he can go toe-to-toe with every guy on the team. He just had to learn the art of rowing.”

All the rowers strive to make the top varsity eight, but only the best make it — with help from teammates pushing them.

“The (top) varsity eight boat is fast because there are so many guys below them who are pushing them to go faster,” Regier said. “When the varsity eight wins, the whole team wins. It’s our team culture. We all do the same amount of work.”

Regier, who has received several Pac-12 academic honors and recently completed his degree in industrial and systems engineering with a minor in applied mathematics, has earned the respect of his teammates.

“If there was one highlight more than any other at the Pac-12s, it was Austin winning his first championship,” Callahan said. “He’s completing a long journey.”

Halbert has been in the UW top varsity eight boat that has finished second in the past three IRA championships.

The Huskies are favored to win this time, but taking nothing for granted. The rowers know they are competing for everyone on the team.

“I would trade all the races I have had if it means winning the IRA,” Halbert said. “It means everything. It’s why we come out here and why I came back.”