With Washington’s season teetering on the edge of oblivion, a different person pitched.

Technically, Gabbie Plain — the Huskies’ 6-foot senior from Harrington Park, Australia — threw all 14 innings and 209 pitches in UW’s doubleheader sweep of Big Ten champion Michigan on Sunday, sending coach Heather Tarr’s team to the super regionals for the fifth consecutive season. Technically, the Pac-12 Pitcher of the Year with six career no-hitters and a 1.23 ERA flashed the same trademark smile after nearly every pitch inside Husky Softball Stadium. 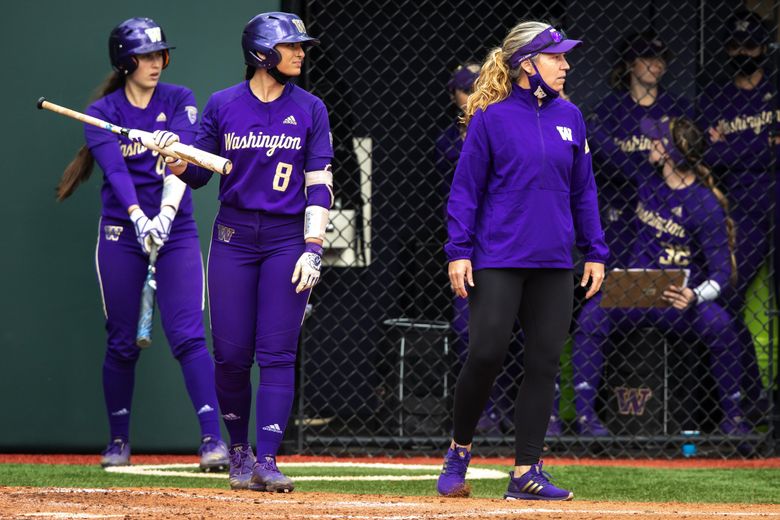 But according to Tarr, something changed after Plain surrendered five hits and five runs in the first two innings on Sunday night — spotting the Wolverines a seemingly insurmountable 5-1 lead.

When the pitches (and pressure) mounted, Plain persevered.

“I think the biggest thing about a pitcher like Gabbie is they believe in their stuff. They know that their stuff can get the outs,” Tarr said in a virtual news conference on Wednesday. “Like you saw with Gabs going back to that game on Sunday night, no matter how dire the situation is, if you really knuckle up and focus, you can always win as a pitcher.

“The first time I’ve really seen her have to dig into the extra gear was this past weekend. I hate to compare her to (former national player of the year and UW national champion) Danielle (Lawrie), but sometimes with Danielle she would get to those points and you’d be like, ‘Uh oh. I don’t know.’ And then all of a sudden it’s different. It’s a different person (out there and they’re able to focus and persevere). It was really neat to see her be able to do that, because she really hasn’t had to carry our teams. She’s always had Taran Alvelo. Last year she was the leader, but we didn’t get far enough to be able to get to those points.”

The Huskies got to that point on Sunday, and Plain promptly held Michigan to one hit and zero runs in the final five innings of an improbable 10-5 win.

But Plain — and Washington — face a far more formidable test this weekend.

To suggest that No. 1 Oklahoma (48-2), which hosts the Huskies in a best-of-three series starting at noon on Friday, owns the nation’s best offense is an egregious understatement. The Sooners’ 11.52 runs per game are nearly four more than the next-closest team … despite 33 of their 48 games ending early due to the mercy rule. Their 2.84 home runs per game are nearly a full homer better than No. 2 Arizona State, and their 142 total taters are more than double what Washington managed … despite the Huskies playing seven more games than Oklahoma. Patty Gasso’s team ranks No. 1 nationally in batting average (.424), on-base percentage (.509) and slugging percentage (.814) as well.

From any angle, this is an unprecedented offensive operation.

“The offensive numbers are unheard of,” Tarr said. “The averages and the power are ridiculous. So there’s obviously a fire under that team, and they’re all about it. How cool is that for our game, to know that the topping out of what people can do wasn’t at (former Oklahoma great) Lauren Chamberlain or at (Arizona shortstop) Laura Espinoza back in 1994? It’s still yet to be defined. But you still have to play defense. You still have to pitch and let it take care of itself that way.”

In other words: that Oklahoma offense still has to face Washington.

It must prove it can hit a uniquely unflappable Plain.

“Her ability to keep calm in any situation, no matter what the score is, no matter who’s on base … you literally can’t tell with Gabbie,” UW graduate student catcher Morganne Flores said of Plain, who led the 45-12 Huskies with a 32-3 record in 35 starts. “She’s so present on every single pitch, and I think that’s super cool. She doesn’t let the momentum of the game get to her. So that’s how I think Gabbie’s so successful. She’s so confident in her stuff and she is so calm in any situation.”

Granted, situations don’t get much more super than this. The series’ second game (at noon on Saturday) will be the first college softball super regional ever broadcast nationally on ABC. Washington will also attempt to upend the No. 1 team in the nation while playing in front of a capacity crowd for the first time this season, with a fourth consecutive trip to the Women’s College World Series dangling precariously in front of Plain.

Together, Plain and Co. have an opportunity to (again) extend their season on a national stage.

“We’ll talk a little bit about the opportunity (to play on ABC) and how great it is for softball, and that they are the team to be able to be on this stage,” Tarr said. “They have the experience of playing in the 2018 national championship series.

“The camera, to us, it’s cool. We like it. But I think for the most part, we want to honor the game and play the right way so the game can continue to grow. So it’s not necessarily about us. It’s about perpetuating the greatness of the game.”

While introducing the Sooners to a different Gabbie Plain.