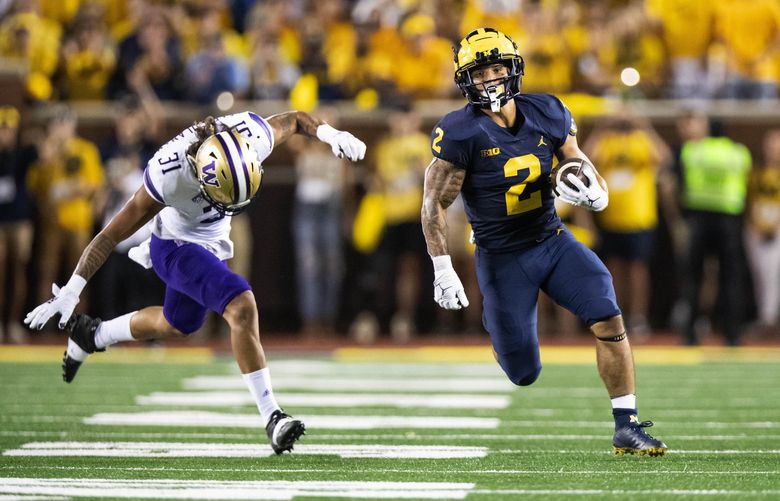 Michigan tops it off with another rushing TD

UW turns the ball over on downs at the Michigan 44

UW quarterback Dylan Morris threw four straight incomplete passes once the Huskies reached the Michigan 44 as they turn the ball over on downs.

Down 24-10, the Huskies are driving with less than eight minutes in the game.

Dylan Morris has connected on five passes, including two each to Taj Davis and Giles Jackson. He has also scrambled for 10 yards, including one 7-yard rush on third down for a first.

UW is past midfield.

UW getting ball back after forcing three-and-out

Three plays after the Morris-Bynum touchdown, the UW defense has forced Michigan off the field with a three-and-out and will get the ball back with less than 11 minutes remaining.

Can the Huskies score again — and quickly?

The taunting penalty comes back to haunt the Huskies.

Three plays after Hampton was penalized, Hassan Haskins and the Wolverines have extended their lead with another rushing touchdown.

Third-quarter observations: No bright side for UW

Across its last seven quarters, Washington failed to score on 19 consecutive drives. It has rushed for 46 yards and 1.7 yards per carry in the first three quarters on Saturday, while allowing 304 rushing yards and 7.8 yards per carry on the other side. UW is about to be 0-2 for the first time since 2008, when it finished 0-12.

But there’s no bright side here.

After appearing to stop Michigan on third down, UW safety Dominique Hampton extends its drive with a brutal taunting penalty.

After the Huskies' field goal, Michigan is methodically driving. The Wolverines just converted a fourth-and-1 to their 48 with their sixth rush of the series.

UW scores first points of the game on short FG

UW driving near red zone midway through the third

In starting the second half with the ball, Michigan has rushes of 20, 11 and 17 yards in a row to get into the red zone early in the third.

Washington is averaging 0.8 yards per carry.

That’s less than one.

And for an offensive line Jimmy Lake touted as the Pac-12’s best a few weeks ago, that’s also unacceptable.

UW’s pass defense did its part in the first half, allowing Michigan quarterback Cade McNamara to complete just 4 of 10 passes for 30 yards. The Huskies recorded a goal-line stop in the first quarter as well.

But this UW offense can’t get anything going, and offensive coordinator John Donovan’s play-calling — with its wide variety of between-the-tackles plunges — certainly isn’t helping. Quarterback Dylan Morris completed a respectable 9 of 15 passes for 111 yards. But UW needs more from literally everybody else.

Huskies attempt run on 4th down, fumble at Michigan 33

UW converts 4th-and-short at own 45

After a bad first-down spot that Michigan coach Jim Harbaugh challenges, the Huskies go for it on 4th-and-short — and get it on a QB keeper by Dylan Morris.

UW snaps ball on 4th-and-1 at own 36, but Michigan timeout leads to punt

Corey Luciano goes in at center for injured Luke Wattenberg

Jackson Sirmon said last week that Washington would stop the run against Michigan.

In the first quarter, the Huskies didn’t do it.

Until they needed to.

Michigan rushed for 72 yards and 5.5 yards per carry, repeatedly gashing the Husky front seven. But the UW defense answered to stone the Wolverines four consecutive times on the goal line to maintain a narrow 3-0 deficit.

On the other side, UW’s offense appears just as incompetent as it did last week. Washington gained 18 yards in the first quarter and punted three times. The Huskies averaged 0.8 yards per carry, and Dylan Morris completed just 1 of 3 pass attempts for 12 yards. UW’s best offensive play was a roughing the passer penalty, and that says everything.

On second-and-10 at the 1-yard line, Michigan's Christopher Hinton was called for roughing the passer on quarterback Dylan Morris to bail out the Huskies.

Michigan is on the board with a long FG

UW punts back to Michigan again

On third-and-10 at the Michigan 26, UW quarterback Dylan Morris took a coverage sack with no one open downfield. The Huskies punted for the second straight series.

Following a personal foul on Julius Buelow that backed the Huskies up to second-and-22, Dylan Morris completed a screen to tight end Cade Otton for 12 yards.

Terrell Bynum in at WR for second series

Michigan kicking off to UW to start

What to watch for when Washington attempts to rebound against Michigan, plus Mike Vorel’s prediction

Remember that running attack that was supposed to be the lifeblood of the Husky offense this season? Well, it didn’t show up in last weekend’s loss to Montana, mustering just 65 rushing yards and 2.4 yards per carry. And while Richard Newton carried the ball 17 times, there was little variety in a supposedly stacked running back room. Redshirt freshman Cameron Davis received just four carries, Kamari Pleasant didn’t get one and sixth-year senior Sean McGrew didn’t play for reasons that were not explained.

Here's what else to watch for during Saturday's game.

To understand what the Michigan game means, UW Huskies need only explore their past

A few minutes prior to the second game of the season, Rodgers — a junior safety from Aloha, Ore. — found his head coach sitting alone on a bench in a darkened hallway connected to the Husky Stadium tunnel. Don James was 50 years old, his hair gradually graying, in the early stages of his ninth season in Seattle. His Huskies had won 10 games each of the past two years, and kicked off the 1983 campaign with a dominant 34-0 shutout of Northwestern a week prior.

Sean McGrew was Washington football’s lone representative on the watch list for the 2021 Doak Walker Award, which honors college football’s premier running back. In four games last fall, he led the Huskies in attempts (43), rushing yards (227), yards per carry (5.3), rushing touchdowns (4) and rushing yards per game (56.8). A sixth-year senior, he was dressed and available for Saturday’s season opener.

The first was the 1983 Penn State Nittany Lions, ranked No. 20 and defending a national championship, who lost to Cincinnati 14-3. Penn State shook off an 0-3 start to beat Washington in the Aloha Bowl 13-10.

The second was the 2007 Michigan Wolverines, ranked No. 5 nationally before Appalachian State left “The Big House” with a season-opening 34-32 win, widely considered the biggest upset the sport has ever seen. After falling at home again the next week against Oregon, the Wolverines ripped off eight consecutive wins, before ultimately defeating Florida 41-35 in the Capital One Bowl on New Year’s Day.