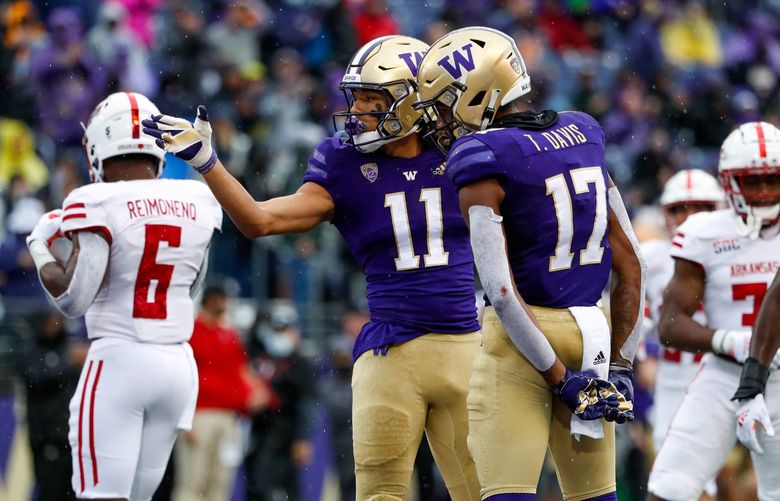 The dam finally broke inside a half-empty Husky Stadium.

And when the dam broke, mercifully, some points poured through — 28 of them in the first two quarters and 53 overall. An offense that managed just 17 total points in season-opening losses to Montana and Michigan sprang to life on Saturday, amassing 582 total yards in a 52-3 win over Arkansas State.

The Huskies got their first win of the season Saturday afternoon, a 52-3 blowout win over Arkansas State. Here are three instant impressions from Washington’s win.

The Red Wolves managed just 166 passing yards, on 44.1% completions, while failing to find the end zone in the first three quarters on Saturday.

That’s a credit to UW cornerbacks Trent McDuffie and Kyler Gordon, though it’s worth noting that McDuffie left the game with what appeared to be an ankle injury. After momentarily disappearing up the tunnel, McDuffie returned with his helmet on and a significant limp, but has not rejoined the game. Mishael Powell has replaced him at cornerback, with Giles Jackson returning punts.

This season, it appears, even successful Saturdays come with asterisks.

UW's shutout is over

On first-and-10 at the Arkansas State 39, Dylan Morris hit the hands of a wide-open Devin Culp, who flat-out dropped an easy touchdown.

Behind QB James Blackman, Arkansas State gained 12 just 12 yards on six plays and punted the ball to the Huskies on its first possession in the second half.

Dylan Morris and UW starts at the 27.

He has seven catches for 152 yards and a touchdown at halftime.

Which, of course, is excellent news for a Washington offense that struggled to produce explosive plays in embarrassing losses against Montana and Michigan. Quarterback Dylan Morris was also mostly on point in the first half, completing 16 of 26 passes for 276 yards with two touchdowns and an interception. And the UW defense did what it usually does to high-tempo spread offenses, shutting out Arkansas State while surrendering just 80 passing yards.

The bad news? UW also produced an interception and two fumbles in a sloppy second quarter, as rain began to fall inside Husky Stadium.

And just like that, UW running back Cameron Davis fumbled the ball, which was recovered by Arkansas State's Elery Alexander at the 25.

UW gets ball right back after INT

No worries on the interception. UW again forced a three-and-out — and blocked the punt for good measure. The Huskies will start their next drive on the Arkansas State 28.

Dylan Morris made his first mistake of Saturday's game, forcing a pass to Cade Otton down the seam and throwing an interception that Leon Jones returned to the Arkansas State 22.

It wasn't a three-and-out this time, but the UW defense again did its job, preventing Arkansas State from getting anything started offensively.

The Red Wolves punted back to the Huskies after gaining just 17 yards on six plays.

Following their third straight touchdown drive, the Huskies have forced a second consecutive three-and-out as Arkansas State again can't get anything started on offense.

UW will start its next possession at its own 7-yard line.

On the other side, Arkansas State was shut out in a quarter for the first time this season – though a blown field goal by Red Wolves kicker Blake Grupe helped in that regard.

Fresh off an explosive play during UW's touchdown drive, Jalen McMillan is coming up big for quarterback Dylan Morris again.

McMillan has two catches for 35 yards, including a 30-yard catch, on the ensuing drive. UW is in Arkansas State territory and threatening again.

Arkansas State drove 59 yards in seven plays, including a few big passes, in 2:11, but was held to a field-goal attempt at the UW 16 — and kicker Blake Grupe missed the 33-yarder.

UW quarterback Dylan Morris completed a 13-yard pass to Cade Otton for a touchdown on the Huskies' second possession of the game.

Arkansas State receiver Corey Rucker dropped a potential first down as UW's defense followed the offense's three-and-out by forcing the Red Wolves into a punt.

Arkansas State, meanwhile, ranks first in the country in pass attempts per game (52), second in passing offense (450.5 yards per game) and fourth in passing touchdowns (9).

Inside Husky Stadium on Saturday, something’s got to give.

“They like to throw the ball,” UW cornerback Kyler Gordon said on Wednesday with a growing grin. “We’re ready for that. We’ve been waiting for that. It’s going to be a fun game.”

What to watch for when Washington hosts Arkansas State, plus Mike Vorel’s prediction

After falling to 0-2 for the first time since 2008, here's what to watch for in Washington's bounce-back attempt against Arkansas State.

In its last four first halves, going back to the 2020 season, Washington has scored a total of 10 combined points. That statistic is almost unimaginable. Last weekend, while playing in front of more than 100,000 fans, UW wide receiver Terrell Bynum said the Huskies (somehow) came out flat. Their first offensive play of the game resulted in a delay of game penalty, which head coach Jimmy Lake called “unacceptable.” But the product on offense has not been acceptable for a very long time, particularly early.

Analysis: Why the Husky offense’s first-half struggles against Michigan were far from a fluke

UW’s first offensive play against Michigan was a delay-of-game penalty.

It was also a metaphor.

Granted, the Huskies had not played a road game in 658 days — the longest FBS drought since at least 1980, according to a UW spokesperson — which makes it unsurprising that 108,345 Michigan fans affected their offensive execution. But two days later, Husky head coach Jimmy Lake called the game-opening gaffe “unacceptable.”

“That starts with us as coaches,” he said. “It starts with me. I’ll take that one. One of our keys to the game was to operate on the road, and we did not do that, and that’s on me.”

But, regardless of who claims blame, the blunders were just beginning. In the first half of an eventual 31-10 loss, UW’s offense managed zero points and 126 total yards, while rushing for 15 yards and 0.8 yards per carry. They punted five times and went 2-9 on third down.

On national television, in front of recruits and parents and pom-pom-pumping fans, the Huskies lacked energy and execution and offensive innovation. They turtled … and that’s a trend.

RB Richard Newton intent on ‘making something out of nothing.’ But should he have to?

The answer said it all.

When asked on Tuesday how he can personally improve, UW running back Richard Newton — who has mustered just 86 rushing yards and three yards per carry in the Huskies’ 0-2 start — considered the question, then said: “Making something out of nothing. I think I could do that a lot better.”

In the last two losses, the 6-foot, 215-pound Newton has had to do that a lot. There has been precious little running room for Newton and redshirt freshman Cameron Davis, as UW ranks 127th out of 130 teams nationally in rushing offense (57.5 yards per game) and 128th in yards per carry (1.95) — while surrendering seven sacks of Dylan Morris as well.

But for a group that returns all five starters — four of which earned All-Pac-12 honors last fall — results have fallen astronomically short of expectations.

Your son or your school? UW linebacker Cooper McDonald’s dad knows who to root for Saturday

Mike McDonald checked his phone Wednesday morning and chuckled at the inquiry directed at him.

“The big question of the week,” read the message on the group text he shares with 50 or so friends, including many who played football at Arkansas State like he did. “Is Mike McDonald wearing an ASU shirt to the Washington game or an A-State jersey?”

“Gentlemen, I always root for the Red and Black,” wrote McDonald, who played four years (1990-93) at defensive tackle for Arkansas State. “But I will definitely be wearing No. 41’s jersey for sure.”

No. 41 is UW freshman outside linebacker Cooper McDonald, a first-year starter who has five tackles this season and has the Huskies’ only sack.

“I can’t think of too many people who would say that Washington-Arkansas State is a big game, but for me, it’s a once-in-a-lifetime game,” Mike McDonald said. “I can’t tell you how much I’m looking forward to it and, I got to say, I’m already getting a little nervous.”

Aside from Mike and Cooper McDonald, you’d be hard-pressed to find any connection between Washington (0-2) and Arkansas State (1-1), which meet for the first time 1:15 p.m. Saturday at Husky Stadium.