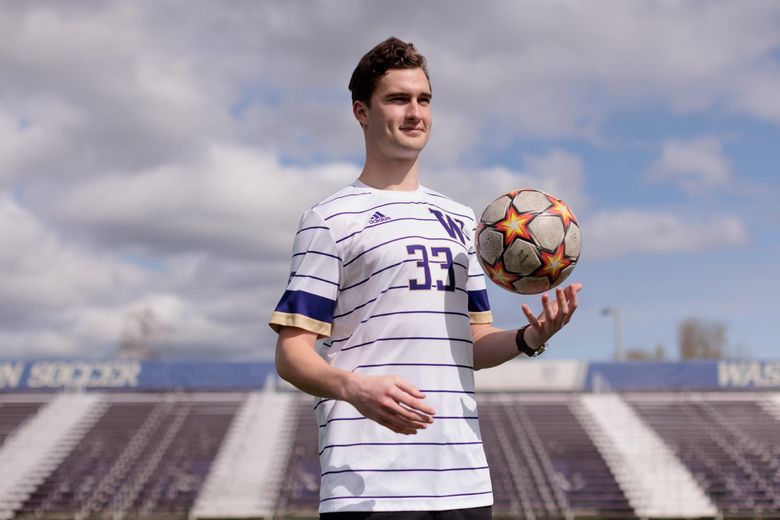 One week before one of the crowning moments of his soccer career — the MLS draft in January — Lucas Meek of the University of Washington was working out with friends. He sprinted for a ball, made a cut — “and my knee just went pop,’’ he said.

It was as bad as Meek feared. He had a torn meniscus that required surgery and ruined any hopes of playing professionally in 2022, even though Inter Miami CF still thought enough of Meek to take him in the second round, 37th overall.

But out of that setback has come something glorious: A heartfelt charitable endeavor that reveals an intriguing aspect of the complex new world of Name, Image and Likeness in collegiate sports.

Rehabbing at UW during winter quarter with no classes — he had already graduated from the Foster School of Business in the fall — Meek pondered what to do with his unexpected free time. When a local sports apparel and gear company called Vintage Brand approached Meek about creating a logo and brand for him, he had an epiphany.

“I thought it was really cool,’’ he said. “But I felt kind of weird selling things just about myself. I’d rather have it mean a bit more, and find another cause I can tie it to.”

With a nudge from Husky men’s soccer coach Jamie Clark, Meek decided to put on a soccer tournament. More poignantly, he knew immediately what cause to tie it to. Meek’s grandfather, Bart Amey, had been diagnosed with Amyotrophic Lateral Sclerosis (ALS, better known as Lou Gehrig’s disease) in 2020. Meek wanted to dedicate his efforts to fighting this cruel, relentless disease.

And thus was born Kick 4 ALS, a 64-team, 5v5 soccer tournament for a variety of age groups that will be held May 14 at the UW’s IMA Field. All proceeds will go to the ALS Association.

“I’ve watched how this disease has affected him,’’ Meek said. “I really wanted to honor him and his legacy, just because of how much he means to myself, my family and how much he inspires just about every person around him, ever since he was diagnosed.”

Amey, who had been an avid tennis player and outdoorsman, is wheelchair bound and uses a computerized speaking device. ALS is a progressive neurodegenerative disease that affects nerve cells in the brain and spinal cord and is 100% fatal.

“It’s definitely been pretty tough for the family, but it’s the harsh reality of this disease,’’ Meek said.

Amey is a Washington graduate who used to live within walking distance of campus. He had football season tickets and the entire family would attend the games together. When Meek, a Mercer Island High School grad, signed with the Huskies, his grandfather became the team’s most avid rooter.

“It was an incredibly special moment for me in mid-February, after planning this event for about a month, when I got to tell him about it for the first time,’’ Meek said. “He couldn’t articulate how he was feeling in that moment. But the smile and the compassion that I could see, and how much it meant to my entire family, was something really, really cool.”

Also cool is how Meek is navigating his NIL rights in a direction that deviates from the public perception of athletes simply cashing in on their fame for personal benefit. All Meek’s proceeds go to the ALS Association. It’s an avenue that those in the Husky athletic department believe can be groundbreaking.

“I think this is a perfect example of how student athletes are using NIL for good,’’ said Amber Bunch, assistant director of NIL education at UW.

“I think so much has been in the media to make it feel as though it’s something that’s being weaponized. But I really think that our student-athletes understand the greater scope and magnitude of what it can be. … It’s not always about the money, the big dollar. Sometimes it truly is about using your name, image and likeness to try to impart some good and some real change in the world … I think Lucas is setting an amazing example for everyone else.”

Clark is not surprised that Meek is one of the athletes leading the way. He has watched him rise from benchwarmer his first two years to captain of the Husky team that made it all the way to the NCAA title game last year.

“You always hope and expect you can make your sport have value in the community,’’ Clark said. “I think there’s no better person than Lucas to be out there as the face of the ALS Foundation, the face of U-Dub soccer.

“He’s just a special person. I know people say that lightly. But anyone who meets him knows that he’s unflappably positive. He wins people over with his demeanor … it’s nonstop, but it’s always with a smile.”

The advent of NIL has been widely described as “the wild, wild West” as schools, athletes, businesses and administrators grapple with its implementation. Some believe it will be the undoing of college sports, taking away what made it special and turning students into thinly disguised mercenaries; others feel it is a long-overdue means for athletes to reap a benefit from the revenue they produce.

What’s undeniable is that it’s not going anywhere, so everyone involved needs to figure out the most productive ways of utilizing it. And Clark believes Meek is providing a road map.

“I think there’s going to be a lot of growing pains (with NIL),’’ he said. “And I think there’s a lot of short sightedness with it right now in terms of dollars in pockets, as opposed to the long-term approach, which should be, what are you? What are you passionate about? Are you going to care about what matters in the long run? And I think using your name, likeness and image for good is just a great way to take advantage of this opportunity that the NCAA, or the courts, or whoever has opened up for us. I think this has more value than any thousand-dollar check.”

Meek has found a willing partner in Vintage Brand, which decided to jump into the NIL realm on the ground floor as a perfect vehicle to market its sports merchandise. They have linked with about 20 athletes around the country, and found Meek through the connection of their founder and CEO, Chad Hartvigson — a former UW baseball player — to Montlake Futures, the company that is facilitating NIL for Husky athletes.

Meek says that he has been working closely with Vintage Brand on putting together an event logo, and they’ve also designed shirts for the tournament. It’s part of a collaborative effort that includes Montlake Futures executive director and general manager Emmy Armintrout, the Husky soccer staff, the Evergreen Chapter of the ALS Foundation and numerous others.

As creative director of Vintage Brand, Michelle Young has worked closely with Meek on developing his brand strategy and populating his online “store.” And the company has embraced his desire to funnel his efforts to the Kick 4 ALS tourney.

“Our whole goal and mission is obviously to help these athletes create their own brand story,’’ Young said. “But it’s also, what do you want to do with that? You’re going to play a few years of sports in college, and maybe you go on to pro, but maybe you don’t. So what else do you care about? What else do you want to kind of put out there in the world?

“With Lucas, it was just kind of a natural transition into what he was already into. And so then we were able to say, ‘Great, we can help you there. We can give you shirts, we can help push stuff out for you.’ So it was kind of in line with what our mission was, too.”

Particularly helpful to Meek with the daunting logistics of a tournament featuring four male and female teams in four different age groups has been Kaycie Hutchins, director of operations for UW soccer. And Amara Bates, development director of the Evergreen Chapter of the ALS Association, has been coordinating and getting the word out on their end. She knows firsthand just how vital fundraising is for a disease that can be prohibitively expensive for families dealing with it.

“We’re the boots on the ground, so to speak,’’ she said. “When someone’s diagnosed, we’re probably the first people they call outside of their doctor. We show up and help with medical equipment, chapter grants, and support in various ways.”

Until his grandfather was stricken, Meek only had peripheral knowledge of ALS through the fame of Lou Gehrig and such events as the Ice Bucket Challenge. But now, he says, it’s a cause “near and dear to my heart.”

By delaying turning pro, Meek retains a year of eligibility and plans to return to the Huskies in the fall, when Clark says he will be a National Player of the Year candidate. Clark believes Meek would have been a top 10 draft pick had he not gotten hurt.

Meek, who interned at Ernst and Young in their consulting practice as an undergrad, has re-enrolled in school and will join the Husky team on a tour of Scotland this summer. He also plans to train with Inter Miami during the summer before embarking on his pro career with the team next year.

But foremost on Meek’s mind now is the charity soccer tournament next month. He realizes that his knee injury opened up a whole new world.

“I thought the world turned upside down for me,’’ he said. “But as bad as it was in the moment, everything that’s happened since then has been so incredible. And I honestly wouldn’t trade it for the world. That is funny to say, but everything has gone so well, and I definitely put that on the people that I’m surrounded by in the community.”

Or, as Clark said of Meek, “He’s taken something that seemed like it was a setback, and then turned it into something that will possibly be more meaningful than any goal he scored.”