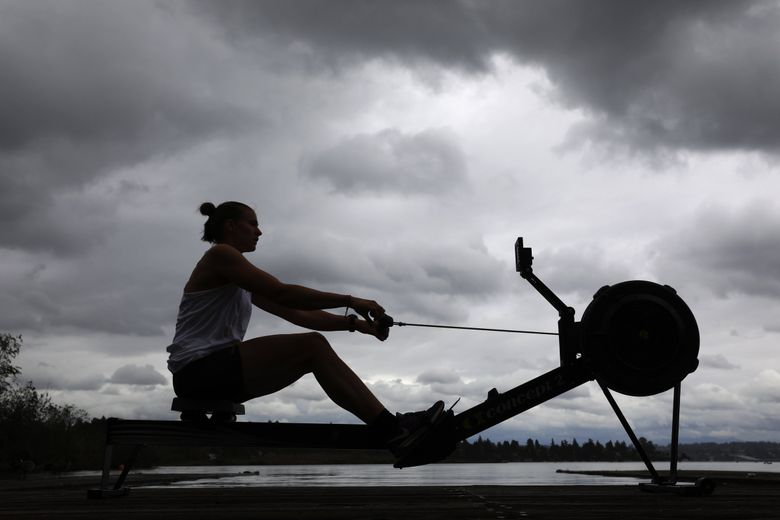 University of Washington junior Tabea Schendekehl is one of the best on the team on the erg. (Ken Lambert / The Seattle Times)
By
Scott Hanson
Seattle Times staff reporter

You might not ever know what it’s like to compete in an eight shell, as the Washington rowing teams do.

That’s right. Indoor ergometer rowing machines – known simply as ergs – aren’t confined to athletic clubs and rec rooms, they also are an integral part of training for the UW men’s and women’s rowing teams, which compete next weekend in the national championships, with the men in Gold River, Calif., and the women in Indianapolis.

“I think of the erg as a cross-training tool for rowing,” said UW women’s rowing coach Yaz Farooq. “The beauty of it is it gives each individual feedback. The erg is a great measurement of how well you use your legs, your back and your arms.”

And if sometimes you hate the erg despite knowing all the good it is doing for your body, don’t feel bad. It can be tough for even elite athletes.

Washington junior Simon Van Dorp from the Netherlands recently received the Pigott Award as the most inspirational member of the men’s team, and he also has the honor of being the fastest Husky on the erg. Van Dorp is one of the best in the world and last year he posted the second fastest time in history at two kilometers at 5 minutes 36.4 seconds, six-tenths of a second off the world record.

That might make you think Van Dorp likes the erg.

“I don’t know if liking it is the right word,” he said. “I have a love-hate relationship with the erg. It is very satisfactory when it goes well, but it hurts, and it’s very confrontational.”

That’s because the numbers are right in front of you and every stroke is measured. It’s just you and the machine. Both mind and body are challenged.

“They measure power output, and motivation and grit,” UW coach Michael Callahan said. “It’s also a good test of your cardiovascular and aerobic and anaerobic systems. It’s testing your physiology.”

Those tests, no matter how often completed, can induce angst.

“If we’re testing (on the erg), I am going to obsess about it,” Van Dorp said. “I had very long conversations with myself, about what I was going to do, how I was going to do it. It was a lot of deep analysis, and it’s one of things I get the most nervous for because it’s so confrontational. If you don’t set it up well in the beginning, you’re going to be screwed for the rest of it. It’s really a mental thing. A mental and physical thing.”

You can work on an erg miles and miles from any body of water. And the big question is obvious: Does greatness on the erg translate to greatness on the water? The answer is a little tougher.

“It shows you your potential, but it has its own technique,” Van Dorp said. “There are a couple of technical things you can do on the erg that you can’t do on the water, but it shows you how big your rowing engine is, and if you can translate that on the water, you can be very fast.”

The key words being “if you can translate that on the water.”

“There is a saying that ergs don’t float,” said UW junior Tabea Schendekehl from Germany, who rows in the stroke position on the women’s varsity eight and is one of the best on the team on the erg. “Because you can be really strong on the erg, but if you can’t apply that to the water, and if you don’t have a lot of boat feeling, you won’t necessarily move the boat as fast as someone who might be slower on the erg and not as strong, but has all this knowledge about moving a boat.”

“Before, they were just measuring power output, and it didn’t feel quite like the water,” he said. “And now they are trying to get them more and more like the water. You can measure a person’s ability to move a boat, and not just how strong they are and how big their cardiovascular system is.”

Excelling on the erg requires great strength, fitness, coordination and determination, and size is also an advantage, Van Dorp said.

He should know, being 6 feet 8 and between 230 and 240 pounds. Size seems to have also helped Sofia Asoumanaki, a 6-foot-3 UW sophomore from Greece, who holds the world record at 2K in the 17-18 female division.

Asoumanaki, who competed in the 2016 Olympics, caught the attention of rowing coaches across the country when she set her world record in the 2K.

“Colleges ask about your scores on the erg,” Schendekehl said. “They also look at water results, but they also want to know what about your erg tests.”

Schendekehl is proof you don’t have to be real big to excel on the erg. She is 5 feet 11, but not imposing physically. She is generally No. 2 on the team in erg testing.

“Sure, I want to be up there, but Sofia is really strong,” Schendekehl said. “I don’t think I will beat her, but I think I have just accepted that fact. I think it is more supportive than competitive because in the end, you are all on the same team, and I’m really glad that Sofia is on our team.”

Current and former Huskies have gained great exposure in indoor rowing circles. Van Dorp is one of just six people to have broken 5:40 in the 2K. One of the others is former Husky Conlin McCabe.

“Going under 5:40 for 2,000 meters, that was a big benchmark, like breaking four minutes in the mile,” Callahan said. “That is crazy talented, and only six people have done it and two of them have been Huskies. We’re pretty psyched about that.”

The Husky men use the erg only a couple of hours a week during this time of the season, spending almost all of the time out on the water. The women, however, will continue to do about five hours a week on the machines.

“We stay in touch with the erg year-round,” Farooq said. “We can get on the water every single day and even twice a day, but for women I think the erg really helps us keep total body fitness, so we want to be on the erg throughout the year.”

The end goal for the work on the erg is a national title on the water.

“It’s awesome to have the erg and it’s given me some new Instagram followers and I am more known than I was before, but I would definitely take a national title over a world record (on the erg),” Van Dorp said.

And with more people using ergs as a fitness tool, what the teams are doing on the water might seem less foreign.

“It’s a form of rowing that the public can relate to,” Callahan said. “Access to water is tough, but access to a rowing ergometer is everywhere right now. It shows the intensity of rowing that’s hard to see on the water. Ergs provide access to a larger audience that rowing needs to grow.”

<strong>When:</strong> Friday-Sunday<br> <strong>Where:</strong> Lake Natoma; Gold River, Calif.<br> <strong>The skinny:</strong> After winning a record five straight national titles (2011-15), UW has gone three years without winning one. The Huskies were second the past two years. In men’s rowing, the winner of the varsity eight competition is the national champion. Defending champion Yale is seeded No. 1 this year and UW is seeded No. 2. The Ten Eyck Trophy goes to the team with the most overall points (from the varsity eight, second varsity eight, third varsity and varsity four), which UW has won 11 of the past 12 years.<br>