INDIANAPOLIS — The University of Washington’s days as Tight End U, which Sports Illustrated famously proclaimed the school in 1998, experienced a little bit of a lull for a while.

But as the program emerged from its 2000s slumber thanks to Steve Sarkisian and Chris Petersen, so did UW’s reputation for sending tight ends to the NFL.

UW seems certain to add another in 2022 — Cade Otton — the only question being where he lands.

“So many great tight ends to learn from,” said Otton, who overlapped with Sample, Dissly and Bryant during his UW career, this week at the NFL combine. “ … I’m proud to be one of those.” 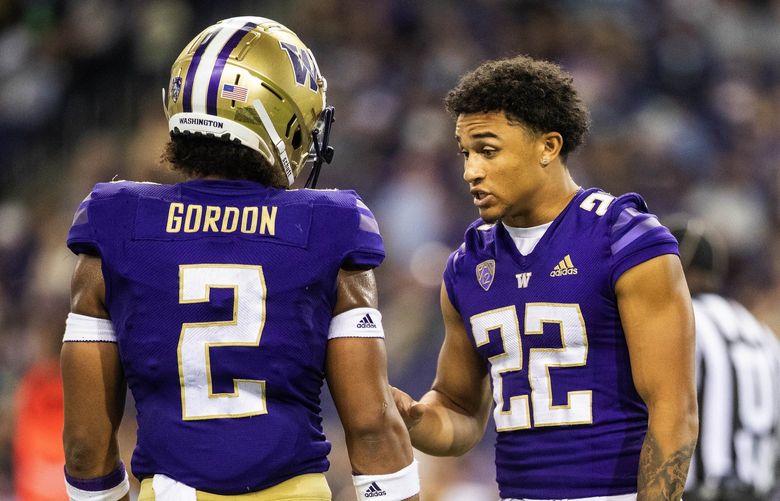 Sample was the 11th UW tight end drafted since 1987 when he was taken in the second round by the Bengals in 2019.

Otton figures to become the 12th, generally considered as at worst a mid-round pick with some thinking he could sneak into the second day (second and third rounds).

“He’s an ascending combination tight end with starting talent,” NFL.com wrote in its draft assessment of Otton. “He should become a more productive pro than college player as a likely Day 2 selection.”

Otton will only be able to help himself so much at the NFL scouting combine this week since he will not take part in drills while still recovering from an ankle injury suffered in November that required surgery.

That injury limited Otton to eight games in his final season at UW, in which he had 28 catches for 250 yards and one touchdown.

But Otton says the injury will be fully healed by training camp, and that he is hopeful he might be able to take part in UW’s pro day, scheduled for March 29.

“It’s a long and slow process but it’s coming along great, and honestly it’s been a great time of reflection and just trying to get healthy and getting my mind right,” Otton said of rehabbing what he said is his first significant football injury. “It’s been a great challenge to deal with this adversity, but I wouldn’t have it any other way. I’d love to be participating, obviously, and competing because I’m a competitor, but the lessons I’ve learned in this time have been invaluable.”

It was a tough ending to what was already a rough UW season, with UW going 4-8 and firing coach Jimmy Lake.

“Yeah, it was difficult,” Otton said. “You have these huge expectations going into the year and it doesn’t pan out the way you planned, and that’s just life sometimes. You do everything you can, you try and find solutions during the year and it just doesn’t work out, it doesn’t go your way. So it was frustrating, but there were a lot of lessons learned and you wish you won more games, you wish were more productive, all this. But I built great relationships, I learned a lot of lessons and I think that will pay off for me down the road.”

But while Otton can’t do drills at the combine, he’s hoping to impress NFL teams in other ways, something he says he owes some credit to UW.

“I think being at Washington helped me a lot from a technique standpoint and also just a language standpoint,” Otton said. “We were in a pro-style offense so I thought a lot of times here I’m speaking the same language as the coaches, so that’s been really valuable as far as communicating and showing what I know and I’m super thankful for that.”

And yes, in an event designed for teams to have meetings with as many players as they can — formally and informally — Otton met with the Seahawks, and specifically tight ends coach Pat McPherson.

And the Tumwater native who committed to UW before his senior year of high school also says what might be expected — that he’d be more than happy to continue his NFL career without having to move.

“That would be amazing,” Otton said of playing for the Seahawks. “Obviously, I loved growing up in Washington, loved staying there for Washington, and there would be nothing wrong with playing there in the pros.”

Seattle’s needs at tight end will become clearer over the next few weeks.

The top two tight ends last year — Dissly and Gerald Everett — can each become unrestricted free agents on March 16. Seattle seems likely to re-sign at least one to pair with third-year player Colby Parkinson. Dissly’s value as a blocker and role in a running game that was among the best in the NFL the second half of last season could make him a particular priority. But depending on what happens, Otton — or another tight end — could be an option with what at the moment are six picks the Seahawks have in the draft.

“Diverse run games will love being able to deploy this guy,” Pro Football Focus wrote recently. “Otton has the want, size and technique to be a difference-maker in this regard while also being a respectable receiver.”

Otton hopes he showed some things to NFL scouts with his performance in 2021 against two defensive ends expected to go at the top of the draft — Michigan’s Aidan Hutchinson and Oregon’s Kayvon Thibodeaux.

“My team trusted me to do a lot of different things and obviously those were some great players playing across from me and I just looked at it as a great challenge,” Otton said. “I had some tough assignments and sometimes I won, sometimes I lost. But it’s all part of the game and I relish those opportunities.”

Now to find out where his next opportunity will be.