They are arguably the two biggest winners in the history of women’s basketball — and that qualifier might be too restrictive. Wherever Sue Bird and Breanna Stewart go, championships just seem to follow — college titles, Olympic titles, overseas titles and WNBA titles.

The last time Bird and Stewart were together, back in 2018, the Seattle Storm rolled to their third championship, capping it in style with a sweep in the finals. And now, after a year’s hiatus for each to heal injuries, they are back together in the WNBA finals — and for the Storm, once again, anything seems possible.

Check that — everything seems possible.

That’s not to say the Storm didn’t have other contributors in their 93-80 victory over the Las Vegas Aces on Friday in the opener of the WNBA Finals in Bradenton, Florida. You can’t minimize the 28 points by Jewell Loyd, or the 11 off the bench in the first half by Epiphanny Prince that jump-started their early surge. 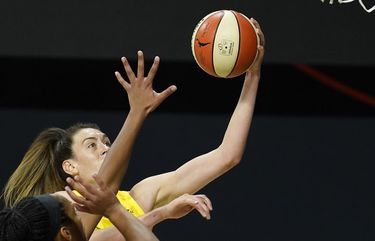 But that combination of Stewart and Bird — or is it Bird and Stewart? — is such a multiplier for the Storm, a galvanizing force that guides them through lulls and valleys. There were both for the Storm against the Aces, because any Bill Laimbeer-coached team is going to play in his image — tough-minded, physical and relentless.

Yet when it ended, the Storm was comfortably in front, having withstood every Vegas flurry behind the brilliant, step-aside-and-let-me-take-over effort of Stewart in the fourth quarter, and the sort of sure-handed floor game by Bird that has marked her 17 years with the Storm — at once calming and energizing.

Stewart ended up with 37 points and 15 rebounds, a combination that has never been matched in the finals — perhaps with some extra motivation in facing the league’s MVP, A’ja Wilson, Bird theorized. Stewart is used to being the top player in every league she plays in. She was the consensus College Player of the Year three times with Connecticut (in addition to four straight Final Four MVPs en route to four titles) and the WNBA’s MVP in 2018 — but finished second to Wilson this season. The Storm held Wilson to 6-of-20 shooting en route to 19 points.

“I can’t speak for Stewie, but I would assume so,’’ Bird said in the postgame Zoom conference of some extra juice for Stewart. “It has nothing to do with A’ja, her season — she was very deserving. But I’m sure Stewie felt she did enough to earn the MVP. … That does give you a little extra motivation.”

Bird had 16 assists — her most ever in one game, and shattering the previous WNBA Finals mark. Those two practically willed the Storm through every tense moment in the game.

Mulling over the Storm’s good fortune in having Stewart and Bird back in the fold, Storm coach Gary Kloppenburg said, “They’ve been through it, through the wars, through those championships, and that experience is invaluable. Stewie has just one championship in our league, but you look back at her college career and she set that precedent for how she’s going to be going forward.”

The Aces made a relentless comeback from 19 points down to tie the game late in the third quarter. That’s when Stewart, possessing what Kloppenburg called “that look in her eyes,” completely took over the game. She scored the first 11 points of the fourth quarter, and 15 points overall, as the Storm put the game away once and for all.

To Bird, it brought to mind a 40-plus game by former Storm star Lauren Jackson in the regular season.

“But in a playoff game? In a finals game? To have a performance like that is next level,’’ Bird said. “What Stewie always brings to the table is a confidence. There’s an air about her. And tonight, once she got going, I don’t know, you could just feel it. It was just oozing out of her.”

And pinpoint passes were oozing out of Bird, who has an uncanny knack of finding the open woman, whether she’s nearby or all the way down court.

“Sue’s just an orchestrator,’’ Kloppenburg said. “She’s like a maestro out there directing traffic, finding open people. She makes the offense flow a lot easier. She gets everyone open shots in their sweet spot. I think that’s what happened tonight.”

Stewart and Bird said they allowed themselves a moment to just appreciate the fact they were back in the finals, back where they thrive, after the year’s absence. Stewart used the word “fun” more than once to characterize the experience.

“I think everyone knows this is a different situation than we’ve had before, just because we’re playing in a bubble, and there are no fans,’’ Stewart said. “Still, to be back in the finals, to have missed everything in the WNBA last year, I’m continuing to embrace the moment, continuing to realize and appreciate how far I’ve gone as far as rehabbing and getting back to this point. And taking advantage of it.”

Bird said she read the recent article in the Players Tribune by her partner, Megan Rapinoe, that calculated she had gone 684 days from the clinching game of the 2018 WNBA Finals to the opener of the 2020 season. And that perspective helped drive out any frustration she might have had over the bone bruise in her knee that knocked her out of several games. In fact, Bird had missed both regular-season games against Las Vegas, which the Storm lost. It was apparent on Friday that the calculus changed completely with her in the lineup.

“It was a frustrating season, and I had a moment, actually before the playoffs started, and maybe a little once we were in the finals,” Bird said. “It kind of came back where I was like, ‘You worked really hard to get to this point. It’s been frustrating, but that’s behind you, so rather than dwell on it, or think about it too much, just know you have an opportunity, and enjoy it.’ ”

For the Storm, the pleasure was all theirs.