Tina Charles’ extensive list of accolades will certainly land her a spot in the Naismith Memorial Basketball Hall of Fame whenever she retires.

“I need a championship,” said Charles, who ranks second all-time in the WNBA in rebounds (3,640), fourth in points (7,115) and 12th in blocks (389). “I’m not afraid to say it and put that out there. That’s why I play. I play to win championships. I know I’m respected in this league as an individual and I know I’ve done a lot of individual things, but I’m here to show there’s a collective as well.

“It’s hard to win a championship. You definitely need the right pieces. But sometimes you don’t get to choose the time, and the time chooses you. Right now, I had an opportunity to put myself in a better position to win and I’m very thankful.”

After 15 years in the WNBA, Charles has her best chance to attain that elusive championship with the Storm.

No. 4-seed Seattle has a 1-0 lead in the first round of the WNBA playoffs and seeks to close out the No. 5-seed Washington Mystics in the best-of-three series with a win at 1 p.m. Sunday at Climate Pledge Arena. 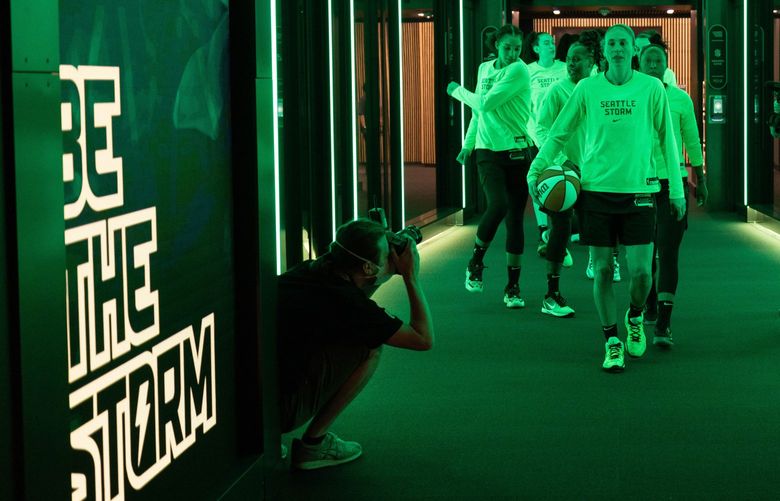 Analysis: Four takeaways from the Storm’s playoff-opening win vs. the Mystics

“I really believe delayed doesn’t mean denied,” the 33-year-old Charles said. “That’s something that I hold on to. I just try to stay in control of what I can control. My journey is definitely different from many WNBA players, but the fact that I’m still able to do what I do, I’m thankful. As long as I have health, I’m thankful.”

Charles, who was the No. 1 overall pick in the 2010 draft, spent her first four years in the league with the Connecticut Sun, which resulted in two playoff appearances, including a postseason exit in the 2012 Eastern Conference finals.

Then she had a six-year stint with the New York Liberty, which made three playoff trips, most notably a run to the 2016 East finals.

After a one-year stay in Washington, Charles signed with the Phoenix Mercury. However, her tenure lasted just 18 games when the two sides agreed on a contract divorce, and she landed with the Storm on June 28.

“I’m thankful to be with a group that’s been there countless times,” said Charles, who averaged 12.6 points and 7.4 rebounds in 18 regular-season games with Seattle. “Making the playoffs for them is nothing new, but for me, I don’t take this granted.”

Aside from Charles’ low-post scoring, rebounding and defense, the 6-foot-4 center has given several veteran Storm players with championships motivation to win it all again.

“I didn’t realize how fat and happy we were before seeing her when we clinched the playoffs and her reaction after we won [Thursday],” Sue Bird said, smiling. “I said to her, ‘This is just Game 1.’ But she hadn’t won in the playoffs since [2015].

“It’s always good to have a player come on to your roster who has a little bit different hunger. It gives you a fresher outlook on things. It reminds you what this actually is and the importance of the achievement of it all. The longer she’s been her and the more comfortable she’s gotten, you sense this could be really special.”

Rather than focus on Charles’ individual matchup with Austin or Delle Donne, coach Noelle Quinn believes a fair assessment is to gauge Seattle’s post players vs. Washington’s bigs.

“There was an adjustment of knowing we were crossmatched a lot,” Quinn said. “Guarding Delle Donne, but to have Austin on you. Also, in the game Ezi [Magbegor] played some very good minutes. When Ezi is cutting and diving and getting those easier buckets, that’s points that Tina would normally get on isolated post ups.

“Tina was solid in my opinion. She had a big offensive rebound and went on a stretch where she was getting some buckets in the paint. I know she’ll be better tomorrow.”

At this stage in her career, Charles had hoped to align with superstars in Washington and Phoenix, but each time their respective championship aspirations imploded due to injuries and unforeseen circumstances.

“She came expecting to play with Elena [Delle Donne] and Alysha [Clark] and that didn’t work out,” Mystics coach Mike Thibault said. “She did not want to come in and carry the load. She wanted to be a part of a larger group.

“She probably has more respect for Sue Bird than any other player in the league as far as wanting to play with a certain teammate. There’s an innate respect there. I think Sue is somebody who for lack of a better term can maybe bring out the best in Tina in this situation because she’s not the center of attention. Part of that is good and part of that is different.”

Breanna Stewart said: “Obviously, we want to win it for Sue and Bri [Briann January] because it’s their last year. But Tina, we know what this would mean to her.”

Bird added: “Whatever gets you motivated. I’m just trying to win. … We’re seeing this experience through Tina’s eyes. For us we made the playoffs the last 105 years or whatever. It’s good to remember what it is to make the playoffs and to feel good about that.”

Maybe so, but Charles, who has a 7-9 postseason record, wants so much more.

“The ultimate is to win a championship,” Charles said. “I’ve positioned myself. I have the right players around me. The right coaching staff, culture, working environment and mental space. All that matters now is to be able to do it.”