Perhaps a disclaimer should be slapped on the Storm’s quest to repeat as WNBA champions that reads: Some assembly required.

Coach Dan Hughes had just two days on the court to work with a reconfigured team comprised of seven returners and six newcomers that will step on the court for the first time this season at noon Saturday.

Furthermore, Seattle opens against the Las Vegas Aces at Everett’s Angel of the Winds Arena shorthanded without key reserves Mercedes Russell and Epiphanny Prince who are expected to join the team next week.

Adding to the uncertainty is the Storm adds two new starters into the lineup and will rely heavily on a cast of newcomers including Candice Dupree, Katie Lou Samuelson and Stephanie Talbot. 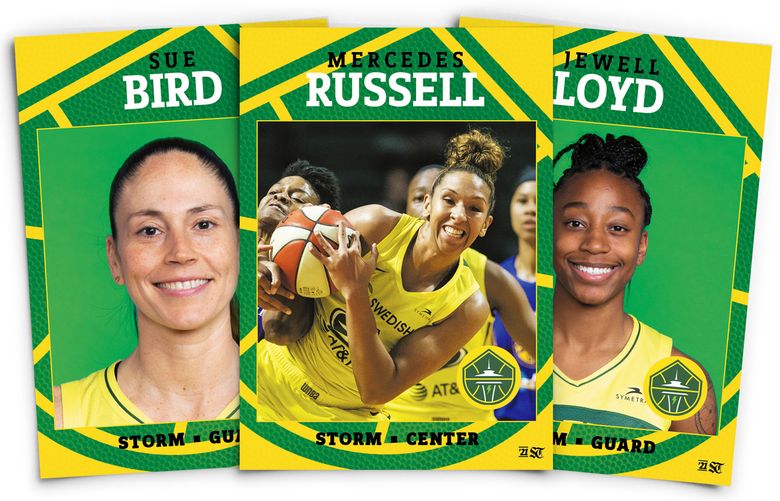 “Those are the types of games you wish you had a rhythm with all of your post players because of what they’re bringing in, but it’s not going to be the case,” Hughes said earlier this week during a Zoom interview. “I do think our defensive system is built a little bit on disruption and a little bit on certainly the strong side of the defensive play from the standpoint of congestion. We’ll have to rely on that pretty heavily, too.”

Saturday’s opener is a rematch of last year’s WNBA Finals, which Seattle swept 3-0, and a possible preview of this year’s league championship, considering Las Vegas begins the season as preseason favorite followed by Seattle, according to an Associated Press preseason poll and an anonymous survey of the league’s general managers.

Even with offseason of changes for Storm, road to WNBA championship will go through Seattle

The Aces also bring back three-time WNBA All-Star Liz Cambage and former Washington Huskies star Kelsey Plum, who missed last season, as well as Dearica Camby, who was out for the WNBA Finals.

By comparison, the Storm comes up a little short, especially in the post against a Las Vegas team that punishes opponents inside.

“You want to have a culture or a system where there is carry-over because we don’t get quality time to prepare to play in the WNBA,” Hughes said. “We never have. This year and most of the time in the past, you don’t have the quality time that you need. What I have really found is veteran players and leaders, they help teach your system as much as we as coaches do. So that combination gives you a chance.

“And in a league where you’re playing 32 games, that’s a pretty quick season. So you benefit from getting off to a good start in a lot of situations. And the good starts are constantly challenged through the years by the arrival of when players get here. It’s very much aided if you have players who have been in the system or you have veteran players who are at a point where … they’re kind of along the line of developing the game.”

Hughes was referring to Sue Bird, Seattle’s 40-year-old point guard/player-coach on the floor, who was voted the smartest player in the league in a preseason survey of general managers.

“How many people have a Sue Bird that can articulate what we’re doing from the inside-out?” Hughes said. “That’s an incredible quality. That helps a lot. That speeds things up a little bit. We try to play to the strengths we have. We try very hard to put people in the right spots. We’re not asking anybody to be exactly like somebody from last year. We’re asking them to get to their strengths. If they’ve got good length, we use it. If they’ve got quickness, we use it. If they’re a shot maker, we use it. We try to get them in a confident state because we’re playing to strengths as much as we can.”

Conceivably, Bird’s leadership and acumen should help Dupree, Samuelson and Talbot adapt to Seattle’s record-setting three-point-prolific offense and a ball-hawking defense that led the league in points allowed and steals last season.

And despite the most roster turnover since 2015, the Storm returns Breanna Stewart, Jewell Loyd and Bird, who were included among the league’s top 17 players in a preseason ranking.

“This team has great potential,” Bird said. “I think a lot of people forget how good Stewie and Jewell are. I don’t know how that’s possible. We have the hard part. … The hard part is getting your franchise players. After that comes filling in the holes and developing the chemistry.

“Now we’re starting over in those two departments. So for me, the way I look at it, I think the potential is extremely high, but those areas we have to let unfold.”

Growth of the league

The alternative goal for Bird and the WNBA’s 144 players is the continued growth of a women’s basketball league that celebrates its 25th anniversary.

From the “We Got Next” slogan in 1997 to the “Say Her Name” social-justice initiative last season, the WNBA has arrived at a unique point in its relatively short history.

The signs of growth are unmistakable.

In the past year, the league negotiated a groundbreaking collective-bargaining agreement, increased player salaries to an all-time high, signed partnerships with Google and Amazon Prime, became a political tour de force and created a new Commissioner’s Cup featuring $500,000 in prizes.

There’s even growing momentum the WNBA will expand beyond its current 12-team format and potentially add four new teams in the near future.

“It’s really amazing how far the league has come in what I consider a short amount of time,” ESPN analyst Rebecca Lobo said in an interview last month. “The excitement is there like it was in the beginning.”

Lobo and Sheryl Swoopes were the first players to sign with the WNBA in 1996 followed by Team USA Olympic teammates Lisa Leslie and Ruthie Bolton-Holifield.

The league’s early trail blazers paved a way for the next wave of superstars led by Lisa Leslie, Yolanda Griffith and Becky Hammon who passed the torch to Maya Moore, Lauren Jackson and Diana Taurasi.

And that group preceded today’s stars such as Breanna Stewart, Sabrina Ionescu and Wilson.

“The only reason we’re here today is because of what they started and what they went through so I’m grateful and thankful because without them, I wouldn’t be here,” said Stewart, who signed a historic deal with Puma this week and became the only WNBA player with a signature shoe deal. “Today’s players are benefiting so much from the people who came before us and we know we have to keep growing the league.”

Bird has spent half of her life in the WNBA and is able to provide context on how much has changed in the oldest women’s sports league.

“It’s so different from when I first got to the league in 2002,” Bird said. “When the league came on the scene in 1997, it made a splash. Everybody was talking about it. ‘We got Next’ was a tagline that everybody knew. It was hot. The league was hot. Sadly, it hit a little bit of a bump in the road and started to decline a little bit and maybe even plateaued. Not from a basketball standpoint, but just from a perception standpoint. A lot of it is not getting the marketing, not getting the sponsorship money.

“What you’re seeing now is people are truly starting to believe in our league and truly starting to see the value. They’re truly starting to invest. Everybody who is in this world of women’s basketball can agree that there is a momentum that started building over a year and a half ago and is continuing to build. To me that’s the beauty of where this league is now at 25.

“Right now, it feels 100% like a momentum shift and I hope that continues to carry us through the next couple of years and beyond.”