Feel the need for some offseason drama but don’t think the Seahawks can provide it?

Not to worry. Seattle Storm superstar Breanna Stewart can fill the void.

Friday, it was reported that the former WNBA MVP met with representatives from the New York Liberty last week in Los Angeles. Included in the meeting were Liberty owners Joe and Clara Tsai, new head coach Sandy Brondello and various members of the team’s front office.

Was this Southern California gathering indicative of where Stewart — a first-time free agent — might land this offseason? Tough to say. But it certainly wasn’t insignificant. 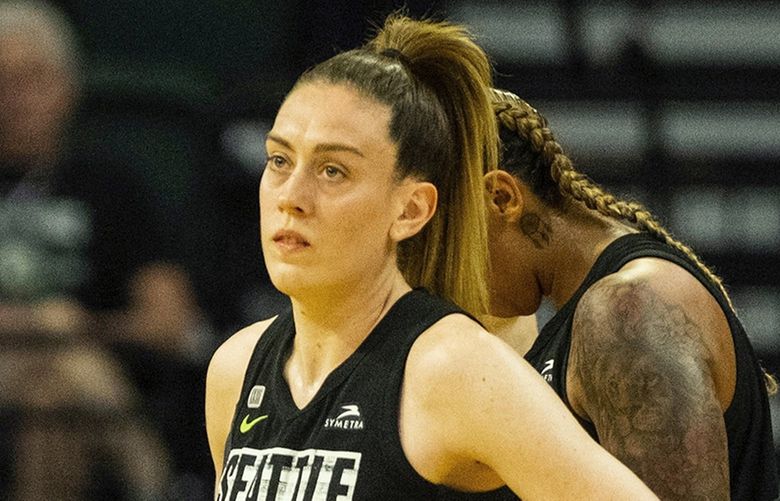 The Storm declined the opportunity to designate Stewart as their “core” player, which essentially prevents a free agent from leaving for another franchise. Seattle instead designated former No. 1 overall pick Jewell Loyd as its core player, figuring she was a greater flight risk.

Stewart has said before that “Seattle has always been my home,” and the idea of her bolting never seemed likely. But what if the Syracuse, New York, native returned to her home state? What if one of the greatest women’s basketball players ever decided her time in Seattle was over?

This isn’t something we see too often in the WNBA. When you look at the league’s greatest all-time players — Diana Taurasi, Lisa Leslie, Tamika Catchings, Sheryl Swoopes, Candace Parker, etc. — they all spent their prime years with the same franchise. There really aren’t those Shaq-to-the-Lakers or LeBron-to-the-Heat or Durant-to-the-Warriors moves that shift the league’s balance of power.

But history shouldn’t dictate how Stewart chooses to go forward with her career. So … what would it mean if she left?

Well, for the Storm it would mean a return to mediocrity. Talented as Loyd might be, accomplished as 41-year-old point guard Sue Bird is, they aren’t going to carry that franchise. It would take landing another whale — and the Storm have had their share of them — for the club to return to glory.

Remember, from 2012 to 2017, Seattle didn’t have a winning record. And that included Stewart’s first two years in the league. Since then, the Storm have won two championships and consistently entertained their fervent fan base. But returning to the top in one of the world’s most competitive sports leagues is no simple task.

And what about Stewart’s legacy in Seattle? No doubt her jersey should hang from the rafters of Climate Pledge Arena. That’s standard for anyone who’s won a WNBA MVP and two Finals MVPs. But she has the ability to go down as one of this town’s all-time greats — on par with Ken Griffey Jr., Russell Wilson and Bird. Does that matter to Stewart? We can’t get in her head. But it’s doubtful she’d be viewed with the same reverence if she left.

As for what it would mean for the WNBA? Assuming Stewart can stay healthy, there’s a good chance that the Liberty could become the league’s next dynasty. Breanna is a rare talent. She might be the greatest player in NCAA women’s hoops history. And given her four appearances on All-WNBA teams in her five healthy seasons (an Achilles injury kept her out in 2019), she’s on her way to being one of the best pros ever, too. She’s nearly impossible to guard in the post, is a three-point threat and one of the game’s better rebounders and shot blockers. Like a LeBron or Durant, Stewie can turn any team into a title contender.

As for what this might mean for superstar free agents going forward? That’s hard to figure out. If the “core” player rule didn’t exist, Stewart changing franchises could signify a trailblazing moment. But when organizations have the ability to keep a certain player from escaping, the narrative is a little different.

Maybe this column will look silly in a few weeks should Stewart stay put. She has said before that she plans on returning to Seattle “unless something crazy happens.” Can’t blame someone for meeting with another franchise just to see what’s out there — especially when that meeting is in L.A. in January.

Still — that meeting did happen. You gotta think if she were 100 percent committed to staying in the 206, she would have given the Liberty a polite “no thanks.”

We’ll see what transpires over the next few weeks. This could be a nothing burger — just as the “Russell Wilson wants out” story that filled the headlines last year.

But it’s interesting to think about. Seattle sports needed some drama this winter. Thank Stewart for providing it.