Remember when Breanna Stewart talked with a fair amount of certainty about returning to the Storm next season?

“Seattle has always been my home,” the 27-year-old Storm star said back in September days after Seattle was eliminated from the WNBA playoffs. “It’s where I’ve grown up. It’s where my career has continued to blossom.”

However, Stewart, who is an unrestricted free agent for the first time in her career, did provide a caveat to suggest returning to Seattle isn’t a 100% done deal.

“I plan on being back unless something crazy happens,” she said.

Crazy or not, the New York Liberty are making a hard push to sway the Syracuse, New York, native back home and met with Stewart this week in Los Angeles, according to a tweet Friday morning from Yahoo! Sports NBA writer Chris Haynes.

WNBA teams can negotiate with free agents, but deals can’t be made official until Feb. 1.

New York, which finished 12-20 and was eliminated in the first round of the WNBA playoffs last year, can pitch Stewart on leading a promising young Liberty nucleus that includes Sabrina Ionescu, the 2020 WNBA No. 1 overall draft pick, 2021 WNBA All-Star guard Betnijah Laney and 2021 WNBA Rookie of the Year Michaela Onyenwere.

The Liberty, who are one of the eight original WNBA franchises and appeared in three WNBA Finals, have been mostly irrelevant in recent years. New York’s last winning season was in 2017 and its last playoff win was in 2015. 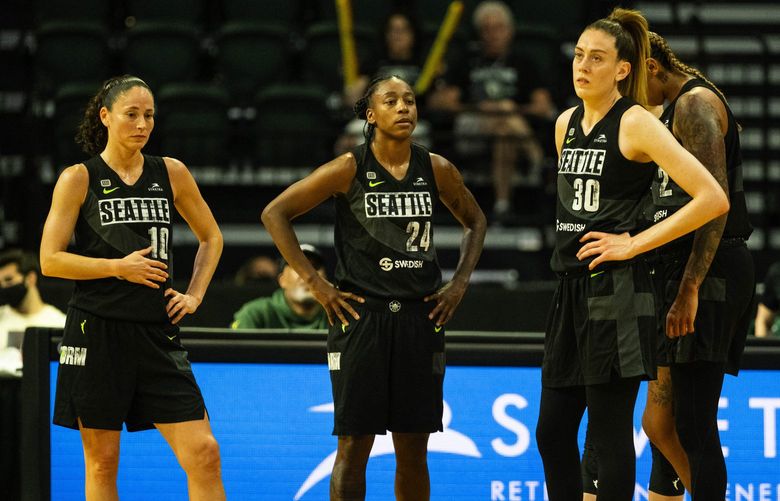 Off the court, New York could potentially provide Stewart, the only WNBA player with a signature shoe deal, a slew of marketing opportunities. Her prospective shoe “Stewie 1” with Puma is scheduled to debut next season.

Despite offseason surgery to repair a left Achilles injury, Stewart is considered one of the top free agents on the market after guiding the Storm to an inaugural Commissioner’s Cup title.

Seattle, which finished 21-11, was 20-8 with Stewart in the lineup. She averaged 20.3 points, 9.5 rebounds, 2.7 assists, 1.7 blocks and 1.2 steals. The Storm star also missed five games, including the season-ending playoff loss to the Phoenix Mercury.

“My heart is in Seattle, and I plan to be back playing in the new arena, playing in Climate Pledge,” Stewart said in December during an interview with Forbes. “Overall, I think the offseason is going really well — obviously taking some time away from basketball and making sure I’m rehabbing and recovering well.”

Losing Stewart would be a seismic shift in the WNBA power structure and a major blow for the Storm, who could have used their core designation to secure the two-time WNBA Finals MVP and three-time WNBA All-Star.

Instead, Seattle gambled and designated Jewell Loyd as its core player last week.

The 28-year-old Loyd was considered by many WNBA observers to be the greater flight risk who might leave Seattle in free agency, which largely explains why the Storm made it a priority to retain the three-time WNBA All-Star guard.

If Stewart signs with New York, then it remains to be seen whether Sue Bird, who is also an unrestricted free agent, returns to Seattle.

The 41-year-old star announced she is coming back to the WNBA for her 19th season, but Bird has profusely credited Stewart for her ability to play at a high level late in her career.