Predictably, the dynasty questions began shortly after the Storm won the 2020 WNBA title, which gives the storied Seattle franchise four championships, tied for the most in league history.

At the start of the playoffs, Sue Bird sidestepped questions about the Storm’s seemingly bright future and the prospect of stockpiling a record number of titles.

But that was before No. 2-seed Seattle made a mockery of the postseason with a perfect 6-0 record, winning by an average of 15.3 points and capping its playoff dominance with a 92-59 rout over No. 1 Las Vegas in the most lopsided victory in finals history. 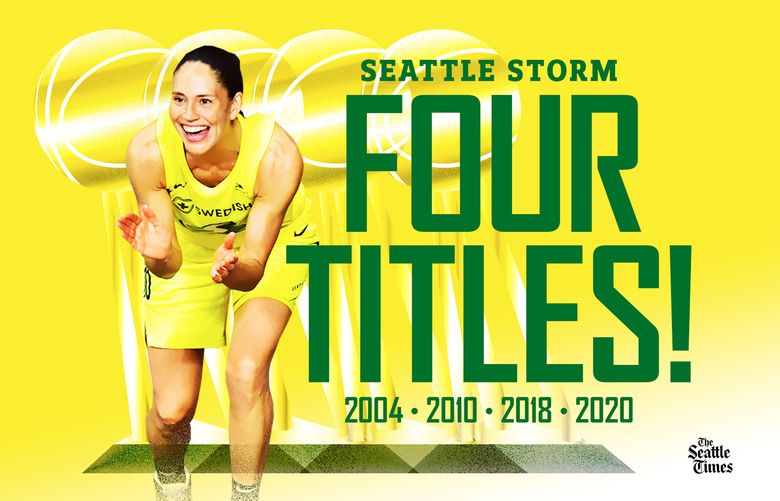 That was before Breanna Stewart won her second WNBA Finals MVP to go along with the one she picked up in 2018.

And that was before Jewell Loyd dropped four scintillating playoff performances while scoring 28, 25, 20 and 19 points.

Considering Stewart turned 26 in August and Loyd celebrated her 27th birthday last Tuesday, the Storm appears to be in good hands for the next decade.

Bird, the WNBA’s oldest player who turns 40 on Oct. 16, expressed a desire to return next year, but she can’t predict how long she’ll stick around.

Still, the 17-year veteran isn’t ready to declare the Storm is on the verge of a dynasty. Not yet at least.

“Minnesota set that mark high,” Bird said. “They are a team that their core group won four in however many years, like six, seven years. So we might have some work to do to get up there, but not many teams have won (multiple times).

“Phoenix has been a team that’s won twice in three years. So we’re close, but not quite there.”

For the record, the defunct Houston Comets are the WNBA’s first dynasty, which won four titles during the league’s first four years (1997-2000).

And the Minnesota Lynx are considered the WNBA’s last great dynasty, capturing four championships (2011, ’13, ’15 and ’17) in seven years.

“I definitely see similarities between those Minnesota teams and what we have going on in Seattle right now,” said forward Natasha Howard, who won the 2017 title with the Lynx before joining the Storm in 2018. “The main thing is the core of players and being able to keep them together over a long period of time.

“First, it’s not easy finding a group of players that can win at a high level. Then it’s not easy keeping them. That can be hard.”

Bird in a Storm

The Storm is just the second team in the 24-year history of the WNBA to dismantle a championship team and win it all over again with a different cast.

Led by Lisa Leslie, the Los Angeles Sparks captured back-to-back titles in 2001 and ’02. Then 14 years later, Candace Parker guided L.A. to a 2016 championship with a revamped roster.

The Storm’s championships fall into two distinct categories — two with Lauren Jackson as the anchor in 2004 and ’10 and two with Stewart leading the way in 2018 and ’20.

Of course, the common denominator is Bird, who admittedly was unsure if she wanted to stay in Seattle following a 12-22 season in 2014.

At that time, Storm CEO and general manager Alisha Valavanis convinced the team’s ownership group that the team needed to rebuild through the draft with young players, which would likely result in some lean years.

Still, for it all to work, the Storm needed Bird to buy in and the Syosset, New York, product considered finishing her career closer to her hometown.

“I don’t think we ever had to convince Sue to be in Seattle,” Storm part owner Lisa Brummel said. “That wasn’t it at all. She loves Seattle. She’s devoted to Seattle. But everybody in their life and everybody in their career should have the opportunity to say, ‘I’m looking at my next phase and what should I do?’

“It was the first time we had that joint discussion about what do you want to do? How do you feel about your career? Where do you want to go? Who do you want to be with to celebrate what you’ve done? You can’t force somebody in that conversation. You have to do it together and I’d say we did it together with Sue.”

The Storm had the No. 1 draft choice in 2015 and as fortune would have it, Loyd, then a junior at Notre Dame, left school early and entered the WNBA draft.

“The whole process of me leaving, I looked at the situation and all the scenarios and just where I was in my life, I could not stay at Notre Dame any longer and I needed to live,” Loyd said. “Playing with Sue? Why would I not want to play with Sue. It kind of just worked out. Everything happens for a reason. Clearly it was meant to be.”

Still, the championship die wasn’t cast until the following year when Seattle landed Stewart, the four-time NCAA champion at Connecticut, with the No. 1 draft choice.

“There is no question that the opportunity to build with Sue in two draft years with consecutive No. 1 picks positioned us for a rebuild,” Valavanis said. “Jewell and Breanna were just exceptional fits for this organization.”

First-round playoff defeats in 2016 and ’17 prompted the Storm to pull longtime coach Dan Hughes out of retirement, and he guided Seattle to a title in 2018.

“Dan, you can say, just stabilized things and put everyone in position where we could just go out and play free and loose,” Stewart said. “The same with Klop (Gary Kloppenburg). He’s so chill, calm and relaxed. … That’s really what we needed this year being in the bubble.”

Life in a bubble

On July 6, the Storm arrived at the IMG Academy in Bradenton, Florida, where the WNBA held the entire season due to the coronavirus pandemic with two goals.

On the court, Seattle pursued a championship and off the court the players committed to the league’s effort to bring awareness to Breonna Taylor and the Say Her Name campaign.

Additionally, each Storm player had their unique story to tell.

Bird was returning from a knee injury that forced her sit out the 2019 season while simultaneously serving a vice president of the players association, which negotiated a groundbreaking collective-bargaining agreement earlier this year and established health and safety protocols inside the bubble.

Stewart also was making a comeback from an Achilles tear that sidelined her in 2019 while serving on the WNBA newly formed Social Justice Council, which addresses inequality, bias and racism that has targeted Black and brown communities.

Loyd arrived in Florida still grieving the loss of her mentor Kobe Bryant, the former Los Angeles Lakers great who died in a helicopter crash with his daughter Gigi and seven others.

Alysha Clark, who led the league in three-point shooting percentage for a second consecutive year and was a unanimous WNBA All-Defense first-team selection, cemented herself as one of the league’s best two-way players.

Admittedly, Howard started slowly before hitting her stride midway through the season, making significant contributions, including a 21-point outing in Game 2 of the finals.

Jordin Canada, Mercedes Russell and Sami Whitcomb enjoyed breakout years in 2019, but had to return to the bench where they were invaluable at times.

“It felt great just because I know the stories of all the players on this team and this franchise and the history behind it,” Loyd said. “It was a lot. Knowing all those little things and how we played, we stayed together through it all.

“It was perseverance. That’s the word that’s always in the back of my mind. This team is strong and we overcame everything.”

Looking ahead, the Storm has five players slated to become free agents, including Bird, Clark, Howard, Whitcomb and Prince.

Seemingly, the prudent move would be to re-sign everyone and make another run at the title.

Led by 2020 league MVP A’ja Wilson, Las Vegas will remain in championship contention and will be bolstered by the return of center Liz Cambage (medical exemption) and former Washington Huskies standout Kelsey Plum (Achilles injury) who did not play this season.

The 2019 champion Washington Mystics should be among title favorites if 2019 MVP Elena Delle Donne, who sat out this season, is able to return from back surgery.

Still, the Storm knows it has something special and is poised for an extended run at the top of the league.

“We’re not complacent at all,” Loyd said. “We have a lot of work that we got to do and things that we can still get better on. Like Stewie said before, we’re young and we’re still getting better and still growing as players and leaders.

“This franchise and this city deserve the best of us. We’re not just happy that we just have two rings. If we can get more, then that’s what we’re going to do.”

Clark added: “When you have the caliber of players that we have and the confidence that we have, anything is possible.”

Brummel, who spent 25 years as a Microsoft executive, is a fan of WNBA history and has studied how Houston and Minnesota maintained their reigns for so long.

“You have to get lucky, whether it’s the draft,” she said. “Whether it’s players not getting injured. Whether it’s the ball bouncing off the rim your way, absolutely luck plays into everything. Luck played into the timing of when we did the rebuild and the fact that Jewell and Stewie both became available in the draft.

“But what I will say is, you still have to get them to play together. You still have to build the right team around them. And you still have to figure out how to make that last for more than just one time around. Yes, it’s luck, but then there’s also skill to make it come to life. It’s coaching. It’s culture. It’s their own personal motivations. It’s their ability to work with their teammates.”

With another title, the Storm would separate itself from everyone else and become the first team to win five championships.

“I know people have asked me to give a number,” Stewart said when asked how many titles she would like to win. “I’m not going to do that. I’m not going to limit myself like that.

“Just know that every year I play, that’s my goal. I’m trying to win a championship. And when I’m done, however many I get is what I get. And I can live with that.”