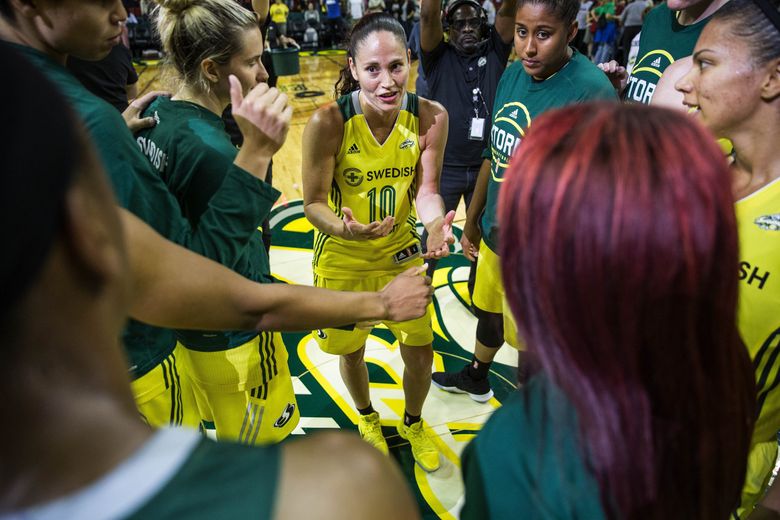 Sue Bird gathers her team at center court after a win over the Dallas Wings. (Dean Rutz / The Seattle Times)

Sue Bird is the only woman to ever play in 500 WNBA games. From Game No. 100 to last Sunday's defeat to the Atlanta Dream that was Game No. 500, we look back at the milestone games that Bird has played in her long Storm career.

In the Storm’s defeat to Atlanta on Sunday, Sue Bird played in her 500th game to become the WNBA’s all-time leader in games played.

In an interview with The Seattle Times this week, Bird, 37, reflected back on her 500 games, and spoke at length about the immense expectations she stepped into as the No. 1 overall pick during her rookie season in 2002.

“I was teamed up with another young talent,” Bird said, referring to Lauren Jackson. “We were just kind of flying by the seat of our pants and seeing what can happen.”

And yet, she always knew there was an expectation that she and Jackson were supposed to be the building blocks of the franchise.

“I do remember reading a quote very early, even before I played my first game,” Bird said. “I believe it was (from 1999 WNBA No. 1 overall pick) Jen Azzi. … Someone asked her, ‘What do you expect from Sue Bird the No. 1 pick?’ She said I feel bad for her because the expectations of No. 1 picks is to go out there and score a lot of points and do big things.’

“I don’t think she was trying to be negative. I think it was a genuine comment. But I remember thinking, ‘I wonder what the expectations are of me? Do I have something to prove now?’ That was something I started my rookie year with. From there, it just kind of kept building. Once we got a taste of being a good team and winning a championship, that hunger continued to grow and so on and so forth.”

Since that first year, Bird has gone from strength to strength. She’s won championships and MVP awards, recovered from serious injury, and helped rebuild the Storm after Jackson retired and the franchise started afresh, adding young talents like Jewell Loyd, Breanna Stewart and Jordin Canada.

“It’s definitely not what I set out to do. I know it speaks to longevity as a lot of what has happened for me in some of the records that I’ve broken or charts that I’ve moved up the list on. It’s just all been a part of longevity,” Bird said.

So what’s her secret to becoming the WNBA’s Iron Lady?

“I’m a big proponent of taking care of yourself,” Bird said. “That’s what changed for me. I’m big on spreading that message. What’s happened to me now is proof that it works. I hope players like Stewie and Jewell and the people in our locker room can learn from that and use it as they go on in their careers. I’m sure there will be somebody that breaks this.”

Bird tweeted a thank you to everyone on Sunday, saying “I’ve gone to war with some amazing teammates and coaches, against some amazing competition, and in front of some amazing fans.”

Quick thank you for all the messages & support. 500x I’ve gone to war with some amazing teammates & coaches, against some amazing competition, and in front of some amazing fans. Thank you to all of you https://t.co/QmV3xCa5Cg

Here’s a look back at some of the other milestone games from Bird’s 16-year Storm career.

Peeking back at the Seattle Times archive:

Some 14,884 fans packed Key Arena to cheer on the Bird and Lauren Jackson-led Storm in the regular season finale. But the Storm fell to Los Angeles 83-80 behind a strong outing from Lisa Leslie, who finished with 18 points.

How the season went: In retrospect, that Sept. 18 game didn’t really matter. The Storm powered their way through the playoffs to beat Connecticut and win their first WNBA title — and Seattle’s first championship since the Sonics’ 1979 title.

Peeking back at the Seattle Times archive: Bird’s 200th career game came in a road defeat to the New York Liberty.

How the season went: In Brian Agler’s first season as head coach, the Storm finished the regular season second in WNBA Western Conference standings behind the San Antonio Silver Stars. In the playoffs, Seattle lost to Los Angeles in the Western Conference semifinals.

Peeking back at the Seattle Times archive: Five Storm players — Swin Cash (26), Tanisha Wright (21), Sue Bird (17), Katie Smith (13), and Le’coe Willingham (12) — scored double-digit points to lead the Storm to a 99-80 victory over the L.A. Sparks at KeyArena. Facing a one-point deficit at halftime, the Storm pulled ahead in the third, where they outscored the Sparks 32-21 behind 16 points from Cash and nine from Bird. With the win, Seattle improved to 6-4 and remained in fourth place in the Western Conference.

How the season went: After finishing the regular season 21-13, the Storm, who were the defending WNBA champions, ended their postseason run when they fell to the Phoenix Mercury in Game 3 of the Western Conference Semifinals.

Peeking back at the Seattle Times archive: With a 3-12 record in mid-July 2015, not much was going right for the Storm. But they did have the L.A. Sparks’ number. The Storm had defeated the league-worst Sparks in their first two meetings that year, and, in their third matchup on July 15, erased a 12-point deficit to keep the Sparks winless on the road. The comeback was powered by then-rookie (and first overall draft pick) Jewell Loyd (13 points) and backup guard Renee Montgomery (9 points). Sue Bird hit a jumper and a pair of free throws in the final 1:31 to ensure the win.

How the season went: The Storm went on to sweep the season series against L.A., beating them on August 11 for the fourth time that year. But ultimately, Seattle ended the season 10-24, the second-worst record in the league behind the Sparks. Seattle missed the postseason for the second straight year.

How the game went: Sunday’s Seattle-Atlanta matchup pitted the team with the league’s best overall record, the Storm, against the league’s hottest team, the Dream. With her 500th appearance in a WNBA game, Bird passed DeLisha Milton-Jones’ record for 499, which she accumulated from 1999 to 2015, playing for five WNBA teams. But on Sunday, the hottest squad won that battle, besting the Storm behind 17 points from Elizabeth Williams and 16 from both Angel McCoughtry and Tiffany Hayes to earn a franchise-best seventh straight win. Breanna Stewart scored 31 while Bird sunk four three-pointers in the loss.

What’s next for Bird and the Storm: The Storm have already won more games this season than they did in the entirety of their 2017 campaign and, for now, sit comfortably in first place in the WNBA standings.

The team has its sights set on winning the franchise’s first WNBA title since 2010, but things can quickly shift in the WNBA and there is a lot of basketball to be played. Seattle will close out the regular season with six of its next nine games on the road. The Storm take on the Indiana Fever on Tuesday (4 p.m. P.T.) and will return to KeyArena on August 3 to face the Minnesota Lynx.