On the eve of an otherwise meaningless regular-season finale, Noelle Quinn is wrestling with the mind-bending conundrum that has baffled many playoff-bound coaches.

Should the Storm coach rest her starters, specifically the 41-year-old Sue Bird, or maintain the same lineup and rotations for the noon game Sunday against the WNBA-leading Las Vegas Aces?

Before you answer, keep in mind Seattle already has locked up the No. 4 seed and will be at home for the first two games in a best-of-three, first-round playoff series against the No. 5 Washington Mystics that starts Thursday at Climate Pledge Arena.

“I’m not quite sure,” Quinn said. “We have vets in our organization and just kind of figuring out what’s best for our team right now. Now our mindset is to go in there and play hard, try to go in and be competitive. That’s where we’re at right now.

“If anything changes, that comes with knowing who our players are and what’s necessary for them and their bodies and their minds.” 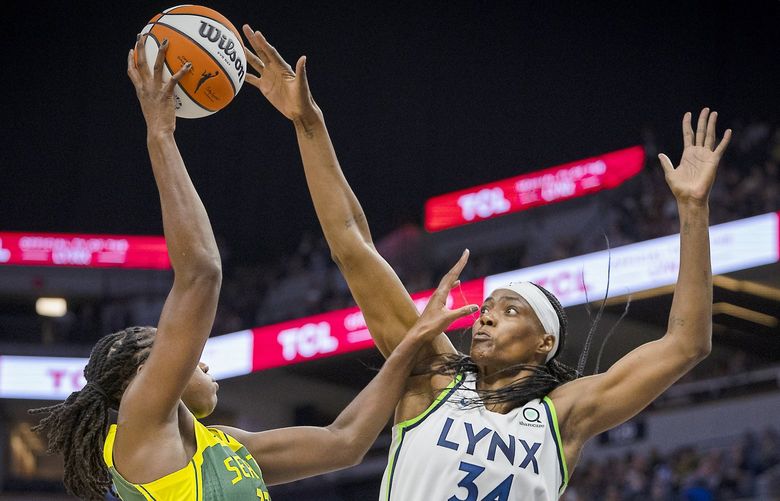 Of course, there are pros and cons to each school of thought that’s supported by Seattle’s recent postseason performances.

In 2020, Bird (bruised left knee) and Breanna Stewart (left foot tendinitis) sat out the final regular-season game against Las Vegas, which resulted in an 86-84 defeat.

At the time, then-coach Gary Kloppenburg admitted resting his stars was a precaution and winning the game had no bearing on home-court advantage considering the entire 2020 season was played at IMG Academy in Bradenton, Fla., due to the coronavirus pandemic.

Las Vegas and Seattle finished with identical records, but the Aces won the regular-season series and captured the No. 1 seed while the Storm was No. 2.

With Stewart, the 2020 WNBA Finals MVP, and Bird leading the way, the Storm posted a 6-0 record in the playoffs, including a 3-0 sweep against Las Vegas in the Finals, to capture their fourth league championship.

But Quinn is a strong advocate of building momentum during the regular season in hopes of peaking once the postseason begins.

The second-year head coach vividly remembers last year when Seattle had the best record in the league at the break for the Olympics at 16-5 and stumbled to a 5-6 finish for fourth in the standings.

To be sure, Seattle’s struggles at the time were mitigated by Stewart’s left foot injury that forced her to miss the final three games, including an 85-80 overtime defeat in a single-elimination playoff game in the second round.

Fast forward one year and fortunes have reversed for the Storm.

Las Vegas has a league-leading three-game winning streak and the Connecticut Sun are 8-2 in their past 10 games, but it’s hard to argue whether anyone is hotter than Seattle right now.

The Storm set a slew of offensive records during the 111-100 victory Tuesday against Chicago and clobbered the Minnesota Lynx 96-69 on Friday.

In the past two games, Seattle has 207 points — the second-most in franchise history — while compiling a WNBA-record 66 assists and shooting 55.8% from the field, including 45.1% on three-pointers.

“We’re scoring efficiently,” Quinn said. “We’re shooting the ball amazing right now. The ball is moving and not sticking. Our players are comfortable in their roles and knowing where they can pick and choose their spots. Being comfortable with one another matters.”

That’s especially true for newcomers Gabby Williams and Tina Charles, who could be the linchpins in a championship run if they continue to find ways to be productive in concert with the Storm’s Big Three of Stewart, Bird and Jewell Loyd.

Since joining the Storm in late June, Charles had one of her best games (23 points and nine rebounds) with Seattle on Friday. Meanwhile, Williams was equally magnificent Tuesday (21 points, seven assists and three steals) and has recently overcome early season struggles.

Considering how well the Storm have played during their three-game road trip, Quinn is hesitant to disrupt the momentum.

Las Vegas is certain to pull out all the stops to win Sunday considering the Aces (25-10) can lock up the No. 1 seed and home-court advantage throughout the playoffs with a victory.

“It’s obviously up to the coaches,” Stewart said when asked if she preferred to rest or play. “That’s a decision for them to make, but for us playing keeps us in rhythm and keeps that rhythm.”

Stewart also can make a closing argument in her bid for the WNBA MVP award against Las Vegas stars A’ja Wilson and Kelsey Plum.

Barring a scoreless outing and a 60-point performance from Plum, the former Washington Huskies standout, Stewart, who averages a league-best 21.8 points per game, will win the WNBA scoring title.

However, it’s believed that Stewart, the 2018 WNBA MVP, and Wilson, the 2019 WNBA MVP, are in a tight race for the league’s top award.

Last Sunday, Stewart finished with a season-high 35 points and 10 rebounds while Wilson had 29 points and six rebounds in a thrilling battle that ended with Las Vegas’ 89-81 victory.

And the rematch Sunday might decide who wins their second WNBA MVP award.

“It’s not just points with Stewie, it’s her ability to rebound, her ability to defend, the steals and moving the ball and getting assists,” Quinn said. “When she’s on the floor, we’re better.

“We understand she makes us go. Getting to the free-throw line and leading the league in that. Her three-point percentage (38.4%). The efficiency, the win-shares and all of those things. … She’s an amazing teammate. She does her job every day and does it at a high level. There’s nobody like her.”

With one game left in the WNBA regular season, here’s a look at the leading candidates for the league’s MVP award.