During her 19 years in the league, there isn’t much Sue Bird hasn’t done.

But Thursday night, the WNBA legend added a new title to her list, as she and the Seattle Storm won the inaugural Commissioner’s Cup, blowing out the Connecticut Sun 79-57.

“Something that I think the WNBA has lacked is its own stage at times,” Bird said. “Different aspects of our season, like the Finals, it kind of gets lost, it’s not necessarily our time whereas a great example is the NCAA tournament where women’s basketball has its own stage. So whether or not the Commissioner’s Cup grows into that, I’m not sure, but it’s something the league can sell ahead of time.

The Cup final was played at the Footprint Center in Phoenix, and pitted the best teams from each division, as determined by the 10 Commissioner Cup games played throughout the first half of the WNBA season. 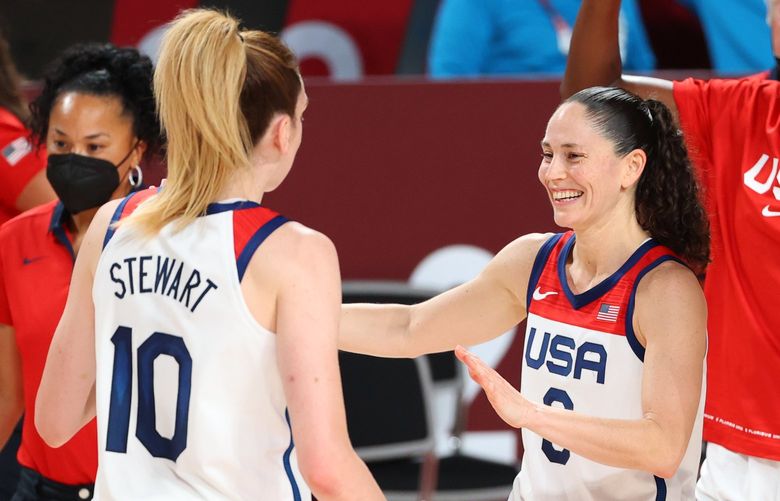 Sue Bird and Breanna Stewart are one of the greatest duos in WNBA history. But they’re not done winning together yet.

“It was a very good opportunity for our team to be part of another first of something,” Storm coach Noelle Quinn said. “Just glad that we pushed through the mental fatigue, physical fatigue and played some great basketball tonight.”

The winning team was promised a $500,000 purse to split between the players, with each athlete guaranteed $30,000 each. The Sun earned $10,000 per player. Breanna Stewart, who was selected by a seven-person media committee as the Cup Final MVP, was awarded an additional $5,000.

The Sun entered the game with the best record in the competition, going 9-1 in Cup games, while the Storm earned their spot after an 8-2 run. The Storm certainly didn’t look like the lower-seeded team in the first quarter. It put up 28 points in the first 10 minutes led by Stewart.

If jet lag was an issue for Stewart, or any of the five Olympians on the Storm roster, they didn’t show it. The star power forward found her stroke from long range early, scoring 13 points on 5 of 6 shooting from the field in the first quarter. Stewart also hit 2 of 3 shots from behind the arc and went on a solo 10-point run, part of a 17-7 spurt by the Storm to take a 10-point lead into the second quarter.

She said she was inspired by the chance to win some money for her teammates, particularly those lower in the rotation who may need the financial boost.

“I think our teammates were the motivating factor behind this team,” she said. “We wanted to win for them. Obviously, $30K is $30K for all of us, but for some of them … it’s a lot, so to help them get that is amazing.”

While Stewart finally got a break in the second quarter, the Storm offense continued to roll. Seattle got four points each from formidable bench pieces Jordin Canada and Ezi Magbegor, while Jewell Loyd added five points of her own, including converting an and-one fast-break layup off a long pass from fellow Olympian Bird.

All of the Sun’s offense in the first half ran through it’s all-star tandem of DeWanna Bonner and Jonquel Jones, who combined for 22 points. The rest of the Sun only managed to score 14 points, and two of its starters were held scoreless in the first half. A dagger from Bird at the end of the half sent the game into halftime up 46-35.

Out of the break, it took the Storm less than a quarter to shut the door. A quick layup and a block on the other end from center Mercedes Russell, followed quickly by four quick points from Bird and a layup by Loyd pushed the lead to 20, and by the time the dust settled on the third quarter, the Storm led 68-30.

Stewart led all scorers with 17 points on 6 of 8 shooting, grabbing four boards and dishing three assists. She also added four steals, three blocks and went 3 of 4 from three-point range in just under 27 minutes. And she did all of that after realizing she didn’t have her right shoe as she was getting ready for warm ups and trying to scramble to find some new ones.

“When (Stewart) sets her mind on something, she gives it her all,” Quinn said. “To me, as a savant of basketball, as a fan of basketball — not her coach, not her former teammate — I think it’s amazing to watch her play.

And in case fans were wondering how the Olympians overcame their jet lag, Bird answered the question in just four words.

“A lot of Champagne,” she said.

The Storm heads back to WNBA play on Sunday against the Chicago Sky.