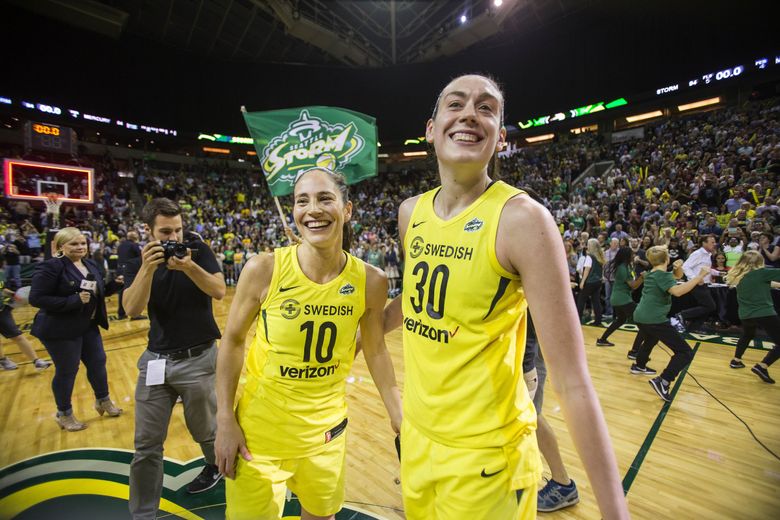 Sue Bird and Breanna Stewart celebrate the Storm’s 94-84 win over Phoenix in Game 5 of the WNBA semifinals. (Dean Rutz / The Seattle Times)

Whether you're a new Storm fan or want to reflect on the team's successful 2018 season, we've got you covered.

The Seattle Storm started this season knowing it could be good. In 2014 and 2015, the team failed to make the playoffs. In 2016 and 2017, it was bounced from the postseason in the single-elimination first round. By May of this year, Breanna Stewart, for one, was fed up with losing.

“It’s time to start winning,” the third-year star said then. “I don’t want to come off as crass or cocky or anything like that, but losing sucks. It does. That’s just how I feel about it.”

So, she and her Storm teammates did something about it. They went an entire regular season without losing back to back games, and when they were pushed to the brink of elimination, their most-experienced star, Sue Bird, took them over the hump — to where they haven’t been since winning the title in 2010.

It’s been quite the season, to say the least. And whether you’re just tuning in or you want to relive the journey, here’s everything you need to know about how the 2018 Seattle Storm ended up winning the WNBA championship.

First half of the regular season

May 20 — Storm falls to Mercury in opener: Stewart had a big night with 22 points and 15 rebounds, but Seattle lost its season opener at KeyArena, 87-82. Read more »

May 31 — WNBA record 17 three-pointers: Seattle had its most dominant performance of the season — a 101-74 victory over Las Vegas — for its fifth straight win on a record-setting night at KeyArena. Read more »

July 8 — Seattle’s top scorer: With 21 points in a 97-91 over the Washington Mystics, Bird became the eighth player in WNBA history to join the 6,000-point club and overtook Lauren Jackson as the franchise’s all-time leading scorer. The Storm (15-5) sat alone on top of the WNBA standings. Read more »

July 22 — Bird sets mark: The Storm had its three-game winning streak snapped in an 87-74 loss at Atlanta, but Bird set a WNBA record for career games played. Read more »

July 17 — Three Storm are selected: The Storm sent three players to the WNBA All-Star Game, including Bird, who made her league-record 11th appearance. Third-year forward Stewart played in her second All-Star Game, while fourth-year guard Jewell Loyd made her first appearance. Read more »

Second half of the regular season

Aug. 7 — Most minutes: Howard collected 19 points, eight rebounds and four assists as Bird became the WNBA leader in minutes played in a win against the Indiana Fever. Read more »

Aug. 9 — WNBA Finals preview: In the last time the Storm played the Washington Mystics before the WNBA Finals, Seattle never led and trailed by as many as 27 points in a 100-77 loss. Elena Delle Donne scored 30 points for Washington. Read more »

Aug. 9 — A win after a loss: Hours after its most lopsided loss of the season, Seattle locked up a top-two finish and a double-bye to the semifinals thanks to the Atlanta Dream. Read more »

Aug. 17 — Home, sweet home: Seattle broke the record for most three-pointers in a season and clinched home-court advantage and the top WNBA playoff seed with an 85-77 win over the Liberty. Read more »

Aug. 26 — M-V-P: In her third WNBA season, Stewart averaged 21.8 points and 8.4 rebounds per game on her way to becoming the second Storm player to win MVP and helping Seattle secure the league’s best record. And she’s just getting started. Read more »

Aug. 26 — Top 5 moments: From her 2,000th career point to outdueling her MVP competition, celebrate the only Storm player to earn the honor since Lauren Jackson by reliving the best moments of Stewie’s remarkable season. Read more »

Aug. 26 — Rock the vote: On the day she was crowned the WNBA’s regular-season MVP, Breanna Stewart urged fans to register to vote. Read more »

Aug. 21 — Mercury moves to second round: The Mercury’s Diana Taurasi had 26 points and 12 assists in Phoenix’s 101-83 win over Dallas to advance to the second-round game against Connecticut. Read more »

Aug. 23 — Mercury sets up Storm matchup: Taurasi (10 of 16 from the field) and Brittney Griner (10 of 15) each had 27 points as the Mercury bounced the Sun to set up a semifinal matchup with the Storm. Read more »

Game 1, Aug. 26 — Semifinal starts strong: Stewart was sensational with 28 points for Seattle, but Jewell Loyd was clutch in the fourth quarter while scoring the last seven points for the Storm, which held off No. 5-seed Phoenix for a 91-87 victory in Game 1. Read more »

Game 2, Aug. 28 — Still cruising: Taurasi outscored Seattle 14-12 in the fourth quarter and drained an improbable three-pointer with 3.6 seconds left to cap a Mercury comeback from 19 points down and force overtime. However, Bird had the final say and wove through traffic for a go-ahead layup with 1 minute, 9 seconds left in the extra period that gave Seattle a hard-fought 91-87 overtime victory in front of a sold-out crowd of 9,686 at KeyArena. Read more »

Game 3, Aug. 31 — No sweep: Phoenix All-Star forward DeWanna Bonner collected 27 points and 11 rebounds to prevent a Storm sweep and lead the Mercury to an 86-66 victory over Seattle in Game 3. Read more »

Game 4, Sept. 2 — A broken nose, another loss: The Storm went ahead by 17 points early in the second quarter, but Phoenix began to seize control with Bird out of the game in the second half with a broken nose. The Mercury forced a deciding Game 5 by holding court at home, 86-84. Read more »

Game 5, Sept. 4 — Bounce back for Finals berth: Stewart scored 28 points and Bird, wearing a facemask, scored 14 of her 22 points in the fourth quarter as the Storm fought back late in the game to clinch a WNBA Finals berth. It was a comeback for the ages. Phoenix scored 11 of the game’s first 13 points, 16 of the first 26 and led by as much as 11. With Phoenix up 73-69 with 6:06 left, Bird’s onslaught began. On the next possession, she made a three-pointer. A minute later, she knocked down a step-back jumper to put the Storm on top 76-75. After Phoenix tied the score, Bird hit a 28-footer that gave the Storm the lead for good at 79-76 with 4:01 left. Bird even impressed herself: “I don’t know if I had a fourth quarter like this in as big of a game in my life, to be honest.” Read more »

Washington vs. Atlanta, Game 5, Sept. 4 — Mystics move to Finals for first time: Delle Donne had a quiet night, but rookie Ariel Atkins, Kristi Toliver and Tianna Hawkins picked up the slack to help the Washington Mystics head to the WNBA Finals for the first time in franchise history by beating the Atlanta Dream, 86-81, in the decisive fifth game of their semifinal series. Read more »

Game 2, Sept. 9 — True grit: Neither team was up by more than five points in the second half of a game decided on the final play, when the Storm got a crucial defensive stop when it needed it the most and escaped with a 75-73 win and 2-0 series lead. Read more »

Game 3, Sept. 12 — The champs are back: The Storm dominated this game from start to finish. Breanna Stewart led all scorers with 30 points to power Seattle’s offense and help the Storm clinch its third title. Sue Bird, who played an instrumental role in the Storm’s 2004 and 2010 championship campaigns, scored 10 points and won her third WNBA title, cementing herself as a legend in Storm franchise history. Read more »

What to know about the Storm on and off the court: