What appears to be the final — and arguably most important — offseason domino fell for the Storm when the team announced the signing of four-time WNBA champion Sue Bird on Monday.

“Seattle and the Storm franchise have been home for my entire career,” Bird said in a statement released by the team. “This is a special team and I’m looking forward to getting back on the court with them as well as representing this great city and our amazing fans.”

It had been a foregone conclusion that Bird, an unrestricted free agent and the league’s oldest player at 40, would return for her 18th season and 20th year with the franchise.

After guiding the Storm to the 2020 WNBA championship last October, she expressed a desire to defend the title assuming “my health and my body allows me to do so.”

At the time, the Storm’s ownership group was vocal about its intentions that the franchise’s most decorated player — and one of Seattle’s great sports figures — retires wearing No. 10 with the team that selected her No. 1 overall in the 2002 WNBA draft.

“Sue Bird has given so much not only to this franchise, but to this league, so quite frankly she’s earned the right to determine where and when she wants to end her career,” Storm co-owner Lisa Brummel said. “We certainly hope it’s right here in Seattle.”

Bird moved a step closer to returning to the Storm when Yahoo! Sports first reported she agreed to re-sign with Seattle on Jan. 31.

However, both sides needed to be patient before finalizing the deal while the Storm orchestrated a slew of offseason moves that dramatically altered the roster and arguably weakened its chances of winning a second consecutive WNBA title.

Seattle then shipped the No. 1 overall selection in the draft this year to the Dallas Lynx for second-year forward Katie Lou Samuelson and its 2022 second-round choice. 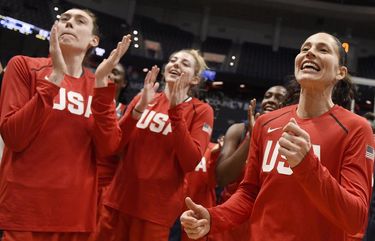 After series of trades and signings, did the defending champion Storm get better?
Advertising

Among a flurry of deals that day, the Storm also acquired forward Mikiah Herbert Harrigan from Minnesota in exchange for a 2022 first-round choice.

Currently, the Storm has 15 players on the roster, which is three more than the WNBA limit. Newcomers Haley Gorecki, Tamera Young and Talbot were given non-guaranteed training camp invitations.

According to HerHoopsstats.com, Seattle has about $16,000 remaining in the $1.3 million salary cap after signing Bird to an expected maximum contract exceeding $200,000.

Ostensibly, the Storm will head into the 2021 season with a starting lineup that includes Bird and Jewell Loyd in the backcourt with Breanna Stewart and Dupree on the frontline alongside possibly Mercedes Russell, Ezi Magbegor, Samuelson or Herbert Harrigan.

Bird, an 11-time WNBA All-Star, is the bridge connecting the Storm’s dynastic runs that included a pair of WNBA titles with former great Lauren Jackson in 2004 and 2010 as well as the team’s latest championships in 2018 and 2020.

Last season, Bird returned from a year layoff due to arthroscopic left knee surgery and averaged a career-low 9.8 points, 5.2 assists and 23.4 minutes, which also was the fewest in her career.

Despite missing 11 of 22 regular-season games with knee injuries, Bird was brilliant in the playoffs while averaging 9.5 points and 9.2 assists to guide the Storm to a perfect 6-0 postseason record, which included sweeps against Minnesota in the semifinals and Las Vegas in the WNBA Finals.

Seattle averaged 93 points and shot 49.4% from the field during the playoffs under the direction of the 5-foot-9 point guard.

Bird also set a WNBA Finals record with 33 assists and tallied a league playoff record with 16 during Game 1.

“It was probably the most challenging season I’ve ever had just because of being in and out of the lineup,” said Bird, noting an injury-plagued season. “It was difficult to get into a routine and develop any flow.

“I’m just glad we found that in the playoffs.”

“Sue Bird has been synonymous with Storm basketball for two decades, leading this franchise to four WNBA championships,” Storm CEO and general manager Alisha Valavanis said. “She is not only one of the best to ever play the game but one of the most important leaders in it.

“She has been integral in the growth of the league and its impact off the court. We are thrilled she’ll be back to lead the Storm this season.”