TUKWILA — Seeing Joao Paulo carried off the Lumen Field turf on a stretcher was a gut-wrenching sight for his teammates. The midfielder was the second Sounders starter to leave Wednesday’s CONCACAF Champions League final match before the half-hour mark because of injury, defender Nouhou suffering “dead leg,” a commonplace thigh contusion.

The severity of Joao Paulo’s injury (a torn ACL that will end his season) was shared during the match through media outlets online — Seattle ultimately won the club and MLS’s first CCL title, but lost their Brazilian star.

“At first, I thought it was something with his ankle,” Sounders midfielder Albert Rusnak said. “After the game when we were told, then we started to realize how long he’s going to be out for and we’re going to miss him for sure because he’s a key player for us. It’s a tough situation and it must be tough for him as well to be in that situation. But we’ll be there for him everyday and hopefully his recovery goes well.” 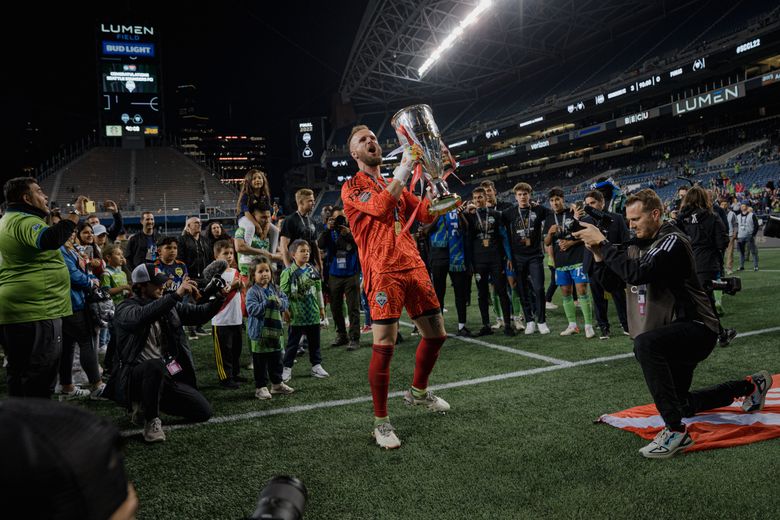 Analysis: After stunning CCL comeback, the Sounders have a chance at history next week

Against Pumas UNAM on Wednesday, Rusnak showed how he’ll help keep the Sounders steady as the club turns its focus to MLS regular-season play and its U.S. Open Cup campaign. The Sounders (2-4-1) play at FC Dallas (4-1-4) on Saturday for the league match and host the San Jose Earthquakes on Wednesday at Starfire Sports in Tukwila for the Open Cup round of 32 game.

Clinging to a 1-0 lead in the 80th minute against Pumas, Rusnak is spotted deep in the visitor’s territory using delicate footwork to keep three challengers off the ball. The little moves allowed teammates Cristian Roldan, Jordan Morris, Nico Lodeiro and Raul Ruidiaz to breakaway, the roar of the 68,741 people in attendance building with each pass and erupting with Ruidiaz’s right-footed finish.

“I’m one of the calmer ones on the field,” Rusnak said after a rainy training session Friday at Starfire. “Especially when we have the possession of the ball. It’s important within the team to find the battles. After being here a few months, I’ve got a good idea of how each player plays individually and how we play as a team.

“We have a lot of explosive guys in terms of with the speed 100% running forward — Jordan, Cristian, they run all game, our fullbacks sprinting all game forward. With me being in the middle and taking care of the ball, making sure we don’t lose it too easily, which will happen, the less time we do it, I feel it will benefit us as a team and we can expose other teams with that speed and power that we have.”

Rusnak was often paired with Joao Paulo in the middle, which allowed for Rusnak to play less defense. The Slovakian international said he’s prepared to handle more of those responsibilities now.

Sounders coach Brian Schmetzer already had trouble spreading minutes to his plethora of midfielders, especially with the emergence of Obed Vargas. The 16-year-old started four of the season’s opening five games and subbed on for Joao Paulo on Wednesday.

There are also formation changes that could have Rusnak share duties with Roldan or Kelyn Rowe. But it’s unlikely changes will involve Rusnak playing higher up the field as the designated player did the past five seasons for Real Salt Lake. He totaled 11 goals and 11 assists, not missing a start in MLS play for the Claret-and-Cobalt last year.

“My role is different from what it was at RSL and I accepted it,” said Rusnak, who has one goal and one assist through all competitions with the Sounders. “I like to play in the middle and I like to be the connection between us having the ball in the back and progressing the ball forward. I’m happy with it.”

Rusnak, 27, left Utah as a designated player free agent last winter because he wanted to win trophies. The CCL title is the first with two on deck. While the Sounders are entering midway through the Open Cup tournament, which includes amateur clubs across the nation, they are 26th in the 28-team MLS Supporters’ Shield table.

MLS rescheduled two league matches for the Sounders to permit the team to focus solely on the two-legged CCL semifinals and finals. Seattle lost its last two MLS matches and has seven points with two games in hand. Los Angeles FC (7-1-1) leads the league with 22 points.

“I’m not too worried about the league, or that we won’t be in the playoffs or anything,” said Rusnak of the Sounders, which have advanced to an MLS-record 13 consecutive postseasons. “It will be hard work, but it won’t be nothing harder than what we’ve done.”