The Sounders came with designs on history, and their fans poured in, nearly 70,000 strong, to will them to it.

In the feverish buildup to Wednesday night’s showdown at Lumen Field, no one even tried to downplay the importance of this CONCACAF Champions League final. The Sounders had won two MLS Cups, four US Open Cups and a Supporters’ Shield since 2009, but they viewed this winner-take-all match against Pumas UNAM, Seattle’s sixth final under coach Brian Schmetzer, as the ultimate test. And the one with the most profound and far-reaching potential payoff — “immortality,” in the words of general manager Garth Lagerwey, and a “massive (expletive) deal for the club” in the quaint assessment of Schmetzer.

And then the Sounders went out and grabbed it, defeating Pumas, 3-0, in a rough-and-tumble match to culminate what has to viewed as the greatest achievement in club and certainly MLS history. In the process, they left no doubt that the CONCACAF balance of power, weighted decisively in favor of Mexican teams for decades, had undergone a sea change. 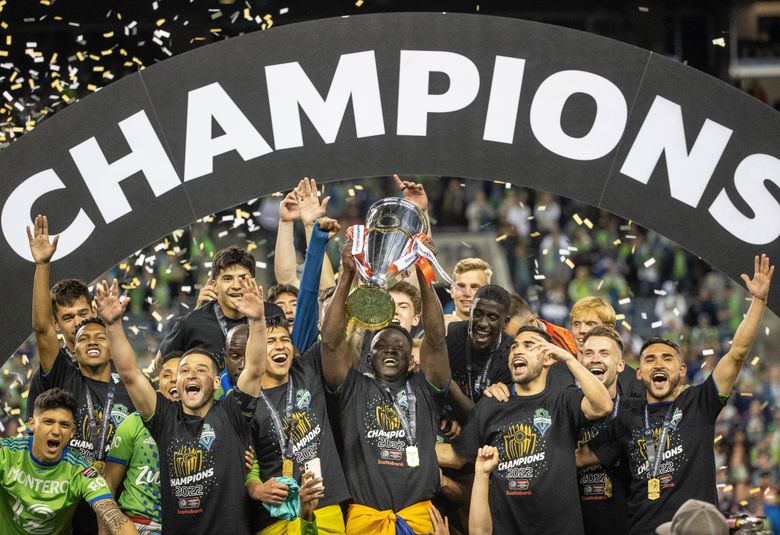 One for the history books: Sounders clinch MLS’ first CCL title in front of record crowd in Seattle

While the Sounders’ two MLS Cups were indeed epic in unique ways, this title, by an aggregate score of 5-2 in the two legs, transcends the limits of mere league glory. In becoming the first MLS side ever to win the CCL title, breaking the string of Liga MX teams winning every year since 2008 — and also a string of four finals losses by the MLS — they struck a massive blow for MLS prestige on the international stage. And they separated themselves from their MLS brethren with a win that suddenly thrusts the Sounders into the realm of the world elites.

That might sound like hyperbole — and certainly the Sounders delivered on the “hype” part with promo videos leading up to the match by two of Seattle’s sports icons, Marshawn Lynch and Ken Griffey Jr. — but consider the spoils of this victory. The Sounders now get an automatic entry into the FIFA Club World Cup, which brings together the continental champions of federations from around the world — Asia, Africa, South America, Oceania and Europe in addition to CONCACAF, which stands for the Confederation of North, Central America and Caribbean Association Football.

In other words, Seattle will be among the best and brightest in the world of soccer. As an example, Europe will be represented by either Liverpool or Real Madrid, soccer royalty no matter who advances. For the Sounders to get to dip into that pool is a huge step for MLS to gain the sort of worldwide respect it has been striving for from the outset.

For the Sounders, meanwhile, it stamps them as a destination team in the MLS, which should pay off down the road in player recruitment, as well as gives them a trophy that had eluded them in six previous forays into this tournament. And now they can measure themselves against the upper echelon the sport has to offer when the Club World Cup is contested, presumably early in 2023.

But that is something for the future. In the moment, as the crowd of 68,741 — largest ever for a CONCACAF Champions League match at any stage — tried their best to replicate a Beast-Quake roar, it was a time to celebrate.

“The connection to fans and players is the spirit of this club,’’ Schmetzer said when the on-field party was finally done.

After knotting 2-2 with Pumas in Mexico City in the first stage of the final, the Sounders dominated the second stage of the match despite losing two key players, Nouhou and Joao Paulo, to injury in the first 25 minutes. Raul Ruidiaz got the scoring going in the 45th minute with a goal that had the press box shaking from the resulting din, then added another goal in the 80th minute on the back end of as beautiful a display of precision (and unselfish) passing as you’ll ever see, first from Jordan Morris and then Nico Lodeiro. And Lodeiro closed out the scoring in the 88th minute, ripping off his jersey to unofficially commence the giddy celebration portion of the night.

But not before Schmetzer, in a classy gesture that won’t go unappreciated by team members, took out Ruidiaz, Lodeiro and Morris three minutes into stoppage time to allow them their deserved ovation. He also inserted team elders Will Bruin and Fredy Montero to allow them a taste of this historic match from inside the pitch.

When the clock expired, the Sounders team exploded into a ballet of leaps and hugs, punctuated by a deluge of confetti, a victory celebration not seen here since the MLS Cup was secured over Toronto in 2019.

That was euphoric, but this was next level. Schmetzer demurred and deferred when asked where this victory and title ranked in the annals of great Sounders moments.

“I said in some press thing, give me six months,’’ he said. “I’m probably going to stick to that. Right now, I’m living in the moment. And I’m just so proud of that group of players, all of them. Because it’s not just the guys that scored the goals tonight. And it’s not just the Yeimars and Stefs (goalie Stefan Frei), those guys, but it’s all the young kids that are coming out. The academy guys, they all get a taste of what this club is all about.

“I’m just super, super proud of the way the team performed throughout this tournament. Under some adversity; it’s not an easy tournament to win. A lot of people were asking me about the subtle pressure about coming here to perform in front of a large crowd. I think they passed that test. They passed it with flying colors.”

Addressing the crowd after the game, Schmetzer told them their role in energizing the team was “freaking awesome.” In talking to the media later, he changed the adjectives to “spectacular” and “awesome.”

“You guys heard it when the teams walked out tonight. You felt the energy in the building. The players felt it.”

By the time the final seconds ticked off, the energy had grown exponentially. And for good reason. Because this win was a massive expletive deal for the Sounders, for Seattle, and for North American soccer.