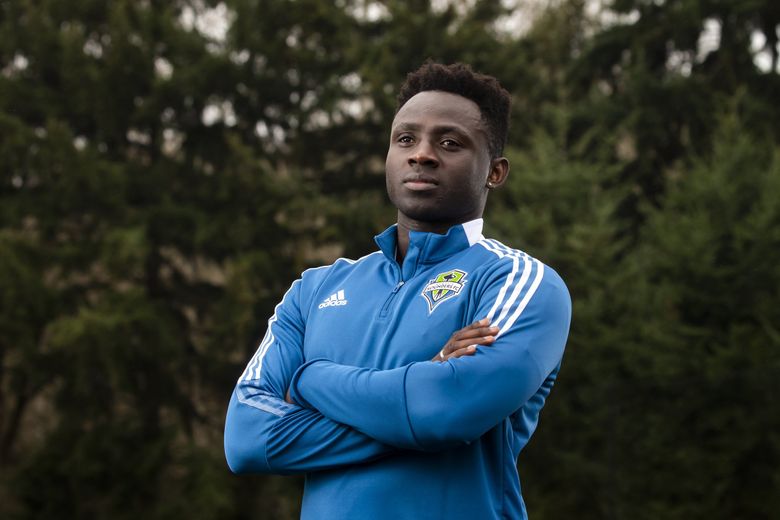 The new chapter began with that fresh apartment smell.

A proud Yeimar Gómez Andrade collected the keys to his new spot in Renton, unloaded boxes shipped from his former Santa Fe, Argentina, home and awaited the fun of having furniture and décor delivered to create his new home.

Soccer has always prompted the gifted center back to move. First as a child from his native Tado, Colombia, a town of about 10,000 located along the San Juan River, to Argentina. After eight years playing professionally in the South American country, Yeimar was intrigued by the Sounders FC, signing a multiyear contract in February 2020.

But what was expected to be an on-field challenge of playing in MLS and learning a different country became a life-altering experience due to the COVID-19 pandemic. The weekend after Yeimar received the keys to the apartment, the U.S. became the latest country spun into a crisis to contain the virus with rippling shutdowns, including the league.

As MLS began its return, Yeimar found himself unpacking more than lamps, dishes and clothes as he integrated into a different world. He also had to unpack what it means to be an Afro-Latino player in the U.S. amid a racial reckoning with a global pandemic as the backdrop.

“I’m happy here now,” Yeimar said as translated from Spanish. “Even despite the quarantine, I never got any desire to go back, especially because I liked it here from the moment I arrived.”

Yeimar was an eagerly awaited signing for the Sounders. Despite winning the 2019 MLS Cup, Seattle lacked a reliable defense. Multiple players rotated at center back after the unexpected retirement of three-time defender of the year Chad Marshall and the 10-game suspension of Roman Torres for a PED violation.

Solidifying the defensive line, particularly someone to pair with MLS newcomer Xavier Arreaga, was a priority for the Sounders after the title run. Yeimar, with his quickness and determination, was the hopeful answer.

“He reads the game well and is a strong one-on-one defender,” said Chris Henderson, then the Sounders’ vice president of soccer and sporting director, about signing Yeimar.

“He anticipates and intercepts balls in transition from defense to attack and is very fast,” Henderson continued.

Yeimar’s transition to MLS was smooth. Not only do the Sounders have an international roster, but the dominant English-Spanish speaking club moved its 2020 preseason training camp to Mexico just as Yeimar was signed.

Yeimar and the Sounders bonded ahead of the club’s CONCACAF Champions League tournament opener against C.D. Olimpia in Honduras. Yeimar joked with teammates on long bus rides to Teotihuacán to hike the archaeological site’s pyramids, or while eating worms and grasshoppers during unique dinner experiences. He even discovered midfielder Nico Lodeiro, who’s from Uruguay, is also a passionate UNO player.

“We joke a lot, he has a similar sense of humor as I do,” Sounders keeper Stefan Frei, who’s fluent in English and German, said of Yeimar’s personality that permeates through language barriers.

Frei dabbled in Spanish to help Yeimar transition his playing style on the field to MLS. “Facil, facil, facil,” which translates to “easy, easy, easy” could often be heard by Frei in directing Yeimar during training and the center back’s season debut against Olimpia in Honduras.

With quality playmakers such as Lodeiro, the club’s all-time assist leader, and midfielder Joao Paulo, Yeimar didn’t need to dart around the field to defend goal.

“In Argentina we play really fast,” Yeimar said. “There’s constant pressure, and that makes it difficult. You need to always be alert and never make a mistake running a lot from one side to the other.

“Here the technique and even the cadence in building and starting the plays, there’s more time. That was something that I had to change in my soccer playing. My peers helped me understand that I could stay calm, stay composed knowing that I have more time.”

Yeimar made his MLS debut against the Columbus Crew SC at Lumen Field. He played the full match before 33,080 fans and tallied one shot on goal in the 1-1 draw.

MLS shut down on March 12, 2020 in an effort to slow the spread of COVID-19. For a three-month quarantine under Gov. Jay Inslee’s stay-at-home order, Yeimar was alone. Excitement sunk to worry when the U.S. border closed and he was unable to show his new bride and their 3-year-old son the home he was creating for them in Renton.

Yeimar met a few Spanish-speaking people on his walks around Renton, providing him a much-needed social outlet. They’d take long walks or text to ease the loneliness of isolation.

“People were treating me with that warmth and that made the day-to-day get better and better,” Yeimar said.

The killing of George Floyd, 46, by Minnesota police on May 25 demanded reflection. Protests in support of the Black Lives Matter movement began in Seattle on May 29, with global cries to end systemic racism and police brutality growing louder as the summer wore on.

Yeimar couldn’t evade the violent nature of racism in the U.S., where Black people comprise 13% of the population but are more likely to be shot by police.

With his dark skin and 6-foot-2, 200-pound stature, Yeimar could also be a target. He feared he could become a headline like the Black people killed by police while riding a bicycle, while walking home, while sleeping.

Portland Timbers forward Jeremy Ebobisse, who was born in Paris but raised in the Washington, D.C., area, threw his frustration into helping a 12-member executive board form the Black Players for Change (BPC). As the league planned a return to play with a summer tournament in Florida, the BPC planned a pregame demonstration to raise awareness about the need for social justice.

Themes that Yeimar said were new to him. Not racism. Anti-Blackness is a global thread that’s as common as those woven for a club’s scarf.

But in Yeimar’s adopted Argentina home, there’s an erasure of the country’s African heritage in comparison to the exclusion in the U.S. A third of the population in the 1800s was enslaved Black people. Argentina gained its independence from Spain on May 25, 1810, and it’s not uncommon to see children and adults in Blackface as part of the celebrations. Then-president Carlos Menem even claimed during a 1996 trip to the U.S. that, “There are no Black people in Argentina; that’s Brazil’s problem.”

As BPC called for the league’s Black players to sign their name to the organization and call for MLS to address its role in systemic racism, Yeimar, who identifies as Colombian, said he paused to fully grasp what was occurring.

“Idealistically, people like to paint the sport of soccer as this great unifier, this thing that breaks down colors,” Ebobisse said. “That is an ahistorical take when you think about the amount of players that were denied access to the sport. So much so that when they actually gained access, they were met with such hatred to the point that the fans would try to get them out of the game. Thankfully these champions, these giants persevered and created a space that I can now operate in.”

For MLS’ tournament opener, more than 100 of the league’s Black athletes, including those from the Sounders’ roster, stood in silence around the border of the field and held a fist in the air for 8 minutes and 46 seconds, the length of time the police officer knelt on Floyd’s neck, killing him.

Teams held similar demonstrations before the opening kick of every match thereafter, the starting lineup kneeled until the referee whistled for the start of play. On Aug. 26, the Sounders joined other pro sports leagues by refusing to play in a united response to Jacob Blake, a Black man who was shot in the back by a Wisconsin police officer. Then, days later, a white gunman accused of killing two protesters at a protest was unharmed and even offered water by officers.

At every step, Yeimar was there wearing his “Black Lives Matter” shirt, kneeling with a fist in the air and becoming more appreciative of the calls for action.

There was even a personal lesson learned within the Sounders’ locker room despite there not being a single U.S.-born Black player on the roster.

In many Latin countries, the phrase “negrito/negrita” translates to “little Black boy/girl” and is supposed to be a term of endearment but is an offensive term to many Afro-Latinx people.

“That was a big learning curve for the Latinos on our team,” Sounders midfielder Cristian Roldan said. “Something that they’ve said their whole lives that’s ingrained in their culture and is said to be completely fine in a different country is not here. That was the most difficult part, (but) they all bought in and understood they’re in a different country. … The guys are embracing that American culture and trying to be part of the change.”

Roldan, who was born outside Los Angeles, was told by a middle-school teacher in a derogatory tone that he’ll be a gardener. Roldan is bilingual and is of Guatemalan and El Salvadoran descent.

The comment, among others as he grew to become a soccer star, fueled his passion to combat social injustices. He is a leader for the Black Lives Matter movement in the Sounders’ locker room, latching onto Manuel Ellis’ story shortly after learning about Floyd’s death.

Ellis, a 33-year-old Black man, was killed by Tacoma police in March 2020. Whether the police will face criminal charges is expected to be announced in April.

Roldan had teammates wear “Justice for Manny Ellis” shirts before a September match against Los Angeles FC. The full roster also posed behind a banner with the same message, with Yeimar standing in the front row.

“The truth is that being added to the movement was very satisfying,” Yeimar said. “I was very happy to see the league, even though it’s a soccer association, it also looks and focuses beyond that. It looks into the human aspect, so it’s a beautiful thing to know they care about players as people, as persons beyond soccer. Maybe not now, maybe the long term, hopefully people will get the sense that skin color doesn’t matter. We’re all equal.”

Yeimar’s growth as a player and person had him beaming as the Sounders opened training camp this month, with the April 16 season opener drawing closer.

This year, Yeimar will be able to show off his apartment to his family. And the Sounders aren’t as concerned about their back line with Yeimar, Arreaga and Shane O’Neill all returning.

“I’m very motivated for this season,” Yeimar said. “I like that I’ll have the preseason to properly train and hopefully be able to contribute. Bring my experience to the team.”