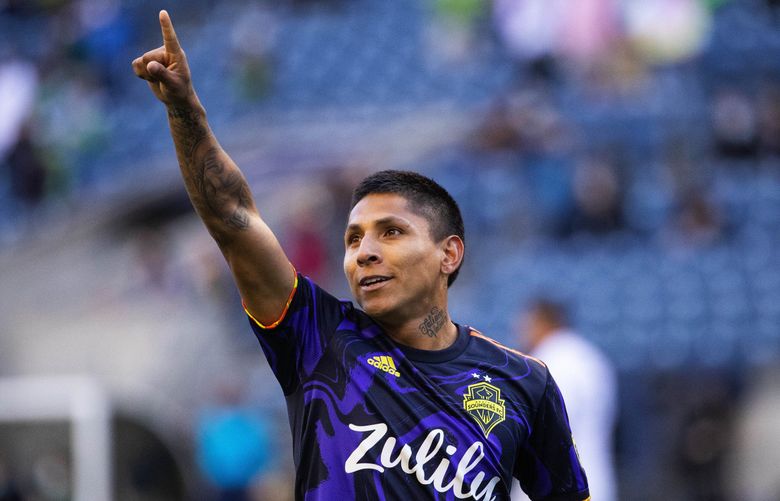 Raul Ruidiaz celebrates his goal scored in the 20th minute against the LA Galaxy. The LA Galaxy played the Seattle Sounders FC in Major League Soccer Sunday, May 2, 2021 at Lumen Field in Seattle, WA. (Dean Rutz / The Seattle Times)

The new all-time favorite goal was born out of frustration — a common sentiment among shooters when they’re not getting enough touches.

Only Raul Ruidiaz opted to fix the perceived problem himself instead of complaining to teammates about pass selection. Midway through Ruidiaz’s now 13-year career, he started working on shooting from distance during trainings.

On a steamy and delirious July night, a match against MLS expansion side Austin FC presented the opportunity to transfer training to a game before 20,738 people at Q2 Stadium. With the Sounders FC starting an MLS-record five teenagers in the match, they needed a proven veteran scorer to deliver.

‘The chemistry is here’: With their stars back and healthy, are Sounders ready to make another MLS Cup run?

Enter Ruidiaz, who sent the excitement to another stratosphere with a 40-yard score that curled over the reach of the jumping, 6-foot-3 Austin keeper Brad Stuver. The stunner was enough to give the Sounders a 1-0 road win.

Even with a 2% likelihood of nestling into the back of the net, “It was not just an accident,” Ruidiaz said, as translated from Spanish.

The Austin goal is just the latest example of how the Peruvian continues to evolve his craft to quickly become one of the Sounders’ all-time greatest scorers. In four seasons, Ruidiaz’s 61 goals through all competitions has surpassed U.S. national team legend Clint Dempsey (57) and trails club original Fredy Montero (68). The latter re-signed in March for his sixth season in Rave Green.

The tricks and tweaks this season have allowed Ruidiaz to amass 17 goals to tie Oba Martins’ single-season record from 2014. Ruidiaz has at least one more match to break the record. The Sounders open their playoff run Tuesday at Lumen Field. “I always try to aim at goal no matter the distance, that’s my way of doing things,” Ruidiaz said. “I only picked up this (technique) in recent years. As a goal scorer, sometimes I don’t get many chances to score. I started doing this so I can get more opportunities.”

But about those touches. Statistically, Ruidiaz sees the ball a lot.

The striker’s 737 touches this season are his most since signing with the Sounders in 2018, according to FBref.com.

“My job is to get (him) the ball,” said Kelyn Rowe, a midfielder who’s played in every Sounders match since signing in January. “It’s not rocket science in any way, and I’ve been told this as a young player, as well — win the ball and give it to the best players. There you go.”

For the Austin score, it was Rowe’s through ball that deflected off defender Matt Besler. A missed chance — and lost touch — that’s happened before in Ruidiaz’s career, which led him to displaying a new skill three days before his 31st birthday.

With Sounders coach Brian Schmetzer preserving the veteran, Ruidiaz subbed on in the 54th minute and nailed the game-winner in the 67th. The shot was his only of the game, totaling 17 touches that night.

“Where I was, where the ball bounced, almost every goalkeeper in the world would be off his line because the ball was far away,” Ruidiaz said. “So, that is something that I instinctively knew. I calculated it in my mind, so when I got a chance on a ball like that, I took the shot.”

In fact, none of Ruidiaz’s scores can be classified as flukes.

Attend enough trainings at the Sounders facility at Starfire Sports in Tukwila and a variation of all his scores can be spotted at some point. Even the panenkas — a distinct type of penalty kick named after Czech midfielder Antonin Panenka. Instead of sending the ball right or left during a shootout to win the 1976 UEFA Euro championship, Panenka lofted the ball center of goal. Most keepers pick a side to dive and can’t recover to save the slow shot. The magnitude of the match and artistry in a surprisingly efficient shot earned Panenka the namesake goal.

Ruidiaz’s 17th goal of the MLS season — a penalty in the 51st minute against the Los Angeles Galaxy — was a panenka against keeper Jonathan Bond.

In harnessing ways to score, however, the goalkeeper isn’t a major factor in Ruidiaz’s training. He said 99% of the work is making sure his mentality stays strong, always believing he’s the best scorer on the field despite his unassuming 5-7 stature.

For match days, the secret to Ruidiaz’s scoring is in a Bose portable boombox designed for DJs. The hypnotic beats of reggaeton, salsa and hip-hop blare through the speakers as Ruidiaz steps off the team bus and heads to the stadium’s locker rooms.

The head-turning volume drowns external noise. His walk is more of a rhythmic dance to the beats. The sway warms up the hips and the unpredictable foot movements elicit a reaction of surprise, onlookers eyes widening above their face masks.

“What I’ve noticed as a goalkeeper is guys that have a low center of gravity are very shifty,” Frei said. “They can hide their movements better because their agility is just better than a big guy that has to shift his whole body weight — it kind of telegraphs their movements a little earlier than someone like a Raul.”

For the majority of the season, Ruidiaz was among the top two scorers in MLS despite multiple national team call-ups for World Cup qualifiers where he played sparingly as a reserve. Ruidiaz injured his left hamstring in the opening half against the San Jose Quakes in September. He bagged a brace in the 3-1 win before subbing off during the break.

But Castellanos vastly outnumbered the leading scorers in shot attempts (132) and shots on target (57) in 32 matches. Ruidiaz’s 17 goals was done on just 91 shot attempts, 38 on target in 26 matches.

The already impressive numbers are even more impressive if you consider the timing of the goals. The Austin goal was a game-winner. The panenka leveled a match where the Sounders needed to pick up points and stay in contention for the No. 1 overall seed in the Western Conference playoff bracket.

“He has a flair,” said Hall of Fame keeper Kasey Keller, who’s a Sounders broadcaster. “But the players you’re investing the most money in, you need them to show up when it matters the most. You’ll talk about players that score a touchdown but you’re already losing 28-0 or you’re winning 28-0.

“Can you get the guy that can get you the score when you need that goal? Raul has been able to do that consistently in his time here. That’s what sets him apart for the Sounders.”

Ruidiaz’s best season in his career remains the 2013 campaign with Universitario in his native Peru’s first division. It was his second of three stints with the club, bagging 21 goals in 39 appearances that year, leading Universitario to a league championship — his second overall with “La U.”

The Sounders increased their interest in Ruidiaz when homegrown star Jordan Morris tore his right ACL during a CONCACAF Champions League match ahead of the 2018 MLS season. Ruidiaz played for Liga MX side Club Atletico Morelia and was a two-time league leading scorer.

When Ruidiaz signed as a designated player in June 2018, the Sounders had an MLS-worst 11 goals and were 11 points behind Cascadia rival Vancouver for the sixth and final postseason spot.

Seattle signed Ruidiaz to a deal worth approximately $14 million, including a $7 million transfer fee to Morelia, through the 2021 season. The striker finished his first MLS season with 10 goals in 14 matches with one assist, the Sounders losing in the opening round of the postseason.

Schmetzer confirmed earlier this fall the Sounders exercised their 2022 option on Ruidiaz. There are still reports famed Liga MX side Cruz Azul is courting a return to Mexico.

“There have been a lot of rumors, a lot of chatter and I want to finish the year before thinking about the future,” Ruidiaz said.

Second-seeded Seattle hosts seventh-seeded Real Salt Lake on Tuesday at Lumen Field in the opening round of the playoffs. The teams split their regular-season series, each winning their home match.

Ruidiaz scored the game-winner off a penalty kick in the 88th minute of Seattle’s 2-1 result against RSL at Lumen Field in June.

“This year has been difficult because there have been a lot of games,” said Ruidiaz, who’s still managing the hamstring injury. “I missed a lot more games because of call-ups than injuries, but I still had some injuries this year. I feel proud that I’m able to score that many goals and I’ve been scoring a lot of goals since I joined the Sounders. … My favorite is across the goal to the far post. That’s where I think I’m most lethal. I’ve been practicing it all my life. I hit it differently and generate more power because I practice it a lot more. But a lot depends on the position of the field.”

And that includes from deep, no matter the touches.