The Sounders were only four minutes into the second leg of the CONCACAF Champions League match against CD Olimpia when they gave up a goal to the more aggressive Honduran side. That early 1-0 deficit eventually busted all of the Sounders’ preseason talk of becoming the first MLS team to win the modern day version of the 58-year-old regional tournament.

The possibility seemed to silence an announced crowd of 34,016 that was eager to get back into the stadium where the last visit was a record sellout and MLS Cup win for the Sounders. 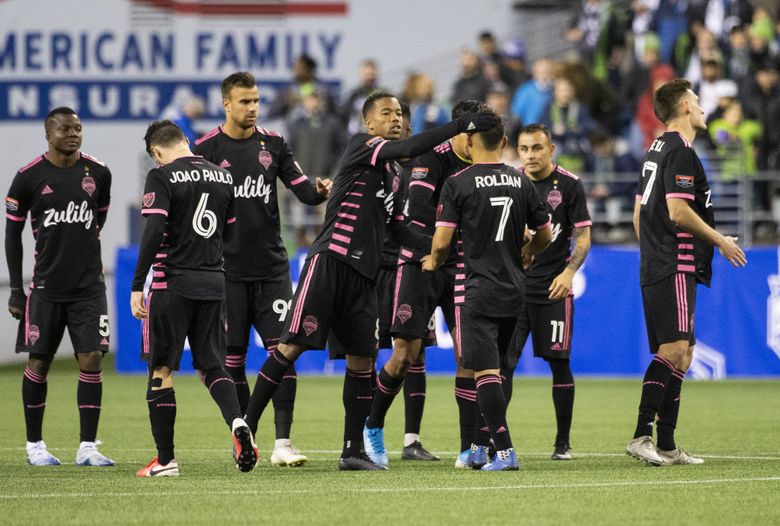 The ouster likelihood started to take hold in the 86th minute when Olimpia knocked home an equalizer to level aggregate scoring and send the match to penalty kicks.

Reality settled in on penalty kicks. The Sounders were outscored 4-2, sending Olimpia on to the Champions League quarterfinals — a first for the Honduran club that’s made 11 appearances in the tournament.

Here are some other observations from Thursday’s match:

The Sounders have made some questionable decisions in their two competitive games to open the 2020 campaign. Last week, forward Jordan Morris tried a scissor pass instead of taking a seemingly open shot that would have put the Sounders up 3-2.

On Thursday, Nouhou had an even more open look at goal and instead passed backward into the oncoming defense in the opening half. And defender Xavier Arreaga struggled with positioning while playing alongside MLS veteran Shane O’Neill, who was signed in January.

It was Arreaga’s play off a corner kick where Olimpia midfielder German Mejia gained possession on Arreaga in the box and knifed the ball in between the post and Cristian Roldan.

“It was an unbelievable strike,” O’Neill said of Pineda’s goal. “I felt like we were in control for long portions of the game. When you look at the two goals that we conceded — a little bit more mentality, maybe a little bit more desire and we cut those out. But from a tactical and communication standpoint (with Arreaga), I think it was OK. It’s just really, really disappointing that we concede two goals like that and go out.”

Defending set pieces was an issue last season. It’s difficult to say Thursday is a carryover from that considering the new players in the lineup.

The Sounders did play better in stopping cross passes from Olimpia. After allowing 61 last week, the Rave Green limited it to 21 on Thursday and dominated possession of the ball at 64%.

For a second week the Brazilian midfielder used swift kicks to ignite the Sounders.

The new designated player assisted Roldan’s equalizer in the 21st minute off a free kick. Later Joao Paulo turned service from Roldan into a fireball shot at goal for a 2-1 lead in the 64th minute.

The game ended in a 2-2 draw and was sent to penalty kicks to declare a winner. After Sounders striker Raul Ruidiaz lofted his shot over Olimpia’s keeper, Joao Paulo beamed his into the net.

“We suffered a goal early and it made things difficult,” Joao Paulo said, as translated from Portuguese. “The goal helped them feel more comfortable, play more comfortably knowing that just one more goal could at least bring them to penalties. In the second half we didn’t manage to hold the ball enough. But now it’s looking forward.”

“They all went to the right side,” Frei said. “We did our homework, penalties are a crapshoot. It is what it is. … This is a missed opportunity. Hopefully we get another chance in the next coming years. But we’ve got to look forward to this year now. Realize that now we can give our undivided attention to the league until Open Cup arrives.”

The Sounders really talked up winning Champions League and appeared to make some smart roster moves in order to do so. Whether the early loss creeps into the MLS season is something to look out for.

A key to Seattle getting to MLS Cup last season was its fast start and the Sounders needed every one of their regular season wins in order to secure home-field advantage.

“It was a lot of work that went into the preseason and it seems like it’s wasted,” Sounders coach Brian Schmetzer said.

Mainstay first-choice midfielders Nico Lodeiro (tendinitis) and Gustav Svensson (calf) were out due to injuries while defender Yeimar Gomez Andrade was unable to procure his U.S. P1 Visa in time to be part of the lineup for the Sounders on Thursday.

Andrade, who was signed earlier this month, was able to play in Honduras. It’s possible the trio are in the Sounders’ starting lineup for the MLS opener against the Chicago Fire on Sunday.

Schmetzer said he was playing the best lineup available this week and that certainly includes Lodeiro and Svensson. Lodeiro participated in parts of training this week. Svensson was spotted doing one-on-one work with trainers.