Partway through a downtown Sounders victory parade Tuesday afternoon, coach Brian Schmetzer got off the double-decker bus he had been riding on with players and began high-fiving some of the thousands of fans gathered along the route. 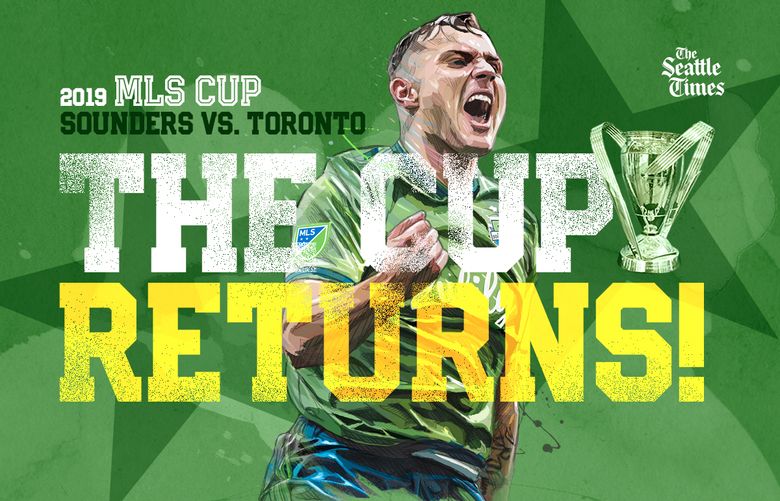 The connection between the team and its supporters has been much discussed before, during and after the Sounders won the MLS Cup championship at home Sunday in front of a record partisan crowd of more than 69,000. Now, the hometown coach from Lake City, who first joined the North American Soccer League version of the Sounders as a player straight out of Nathan Hale High School roughly 40 years ago, was celebrating one-on-one with others who’ve come to identify with all things Rave Green.

Among those Schmetzer connected with were parade-watchers Henry Melendez, 44, a Federal Way restaurateur who grew up a diehard soccer fan in his native Honduras and attended Tuesday’s celebrations with his Seattle-born sons Wesley, 10, and Johanssen, 7. The boys proudly displayed the Sounders scarves Schmetzer had stopped to autograph for them.

“That was amazing,’’ Wesley said.

Melendez had to help run his family’s restaurant Sunday but settled for watching the 3-1 win over Toronto FC on a television set there.

“To be honest with you, when they pulled it off against LAFC, I thought ‘We got this,’ ’’ Melendez said of the team’s stunning road upset in the Western Conference final. “The toughest opponent was going to be that one.’’

Indeed, when Toronto then won its conference final in an upset to secure the Sounders their first chance at an MLS Cup final home game, the focus quickly shifted to the fans as much as the on-field contest itself. And they didn’t disappoint, from a raucous pregame rally that drew more than 10,000 people and clogged Pioneer Square streets, to a thunderous crowd inside the stadium that produced some of the loudest cheering ever recorded at a sporting event anywhere.

And on Tuesday, after the Emerald City Supporters group led a procession that included the team’s Sound Wave marching band and two open-air, Sounders green buses – carrying players and families in one and coaches and support staff in the other – up several blocks of Fourth Avenue past thousands of flag-waving fans, some cheering out of office windows, the parade turned toward Seattle Center. There, on the public lawn beyond where the KeyArena rebuild is taking place, thousands more fans gathered before a concert stage for a victory rally.

There was a shortage of marquee player names at the event, with 11 Sounders called up for duty with various national teams. MLS Cup Most Valuable Player Victor Rodriguez was also a no-show, heading home to see his family, while other absentees included his fellow championship game goal-scorers Raul Ruidiaz and Kelvin Leerdam, along with Gustav Svensson – who had two assists – Jordan Morris, Roman Torres, Brad Smith, Nouhou, Xavier Arreaga and Jordy Delem.

Cristian Roldan also wasn’t there, though his parents both rode the parade route in the lead player bus along with his younger brother, Sounders midfielder Alex Roldan.

But the event still had some star power, with team captain Nicolas Lodeiro and goalkeeper Stefan Frei on hand to speak. Seahawks quarterback Russell Wilson, who joined the Sounders’ minority ownership group in August, attended the event fresh off his “Monday Night Football” win at San Francisco and rode in the second bus with his wife, Ciara before kicking off the rally’s speaker list.

“That was absolutely bonkers, crazy,’’ Hanauer said to huge applause. “And you fans led us to that victory.’’

Sounders vice president Chris Henderson, a onetime youth soccer phenom from Edmonds who later played professionally, told the crowd: “I became a fan of the team when I was 4 years old, and the connection between the fans and the players is the best of any in North America!’’

Sounders general manager Garth Lagerwey, surveying the thousands of fans – many of them school-aged children — drew laughs by saying: “That’s the point of winning a title, isn’t it? So you can have some beers in the middle of the day and skip school and skip work!’’

Among those doing so was Monroe resident Dawn Young and her children Tyler, 14, and Serenity, 11.

“It was amazing coming here, just seeing all the fans,’’ Young said.

Her daughter didn’t get to see her favorite player, Rodriguez, but her son watched as his favorite, goalkeeper Frei, took the stage.

“To be able to share this with you on Sunday was amazing,’’ Frei told the crowd. “You guys deserve it!’’

Lodeiro also thanked the fans, telling them: “I am very happy, because the trophy is here in front of you fans. Because we play for you. We play for your city and want to say, Seattle, enjoy because you deserve it!’’

And enjoy it they did as Schmetzer was called on to carry the Anschutz Trophy out to the stage – having now won it for a second time running the club. Schmetzer admitted the past week’s experience has been somewhat of a homegrown dream realized.