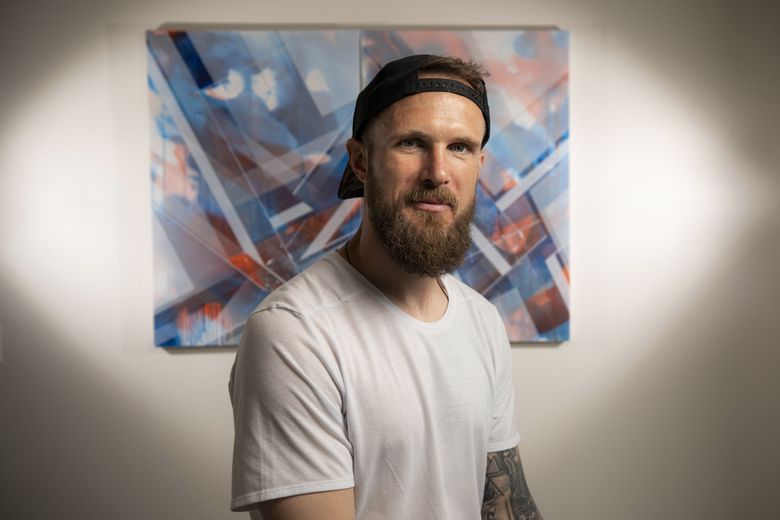 Sounders goalkeeper Stefan Frei sits in front of one of his works of art inside his Queen Anne home June 26. (Bettina Hansen / The Seattle Times)

Some people plan for retirement with stocks and pensions. Stefan Frei is using acrylic paints and canvases.

After years of donating artwork for companies and charities to use, the Sounders goalkeeper is ready to show his true expression as an artist with the target of turning another passion into a second career.

“It was always scary,” said Frei of being on the cusp of his new venture in 2017. “The fact that I’m doing it while I’m still a soccer player allows me to give it time and do it the right way. Now, it’s very exciting.”

At 33, the Swiss-born keeper is in his athletic prime and a key reason the Sounders remain a MLS Cup contender this season. Heading into the Sounders’ game Sunday against reigning MLS Cup champion Atlanta at CenturyLink Field, Frei, who was in goal when Seattle won its 2016 title, is currently third in the league with 62 saves and six shutouts.

But Frei can reflect back to his painful 2012 season with Toronto FC, with whom he broke his left fibula during a rainy practice, as an example of how fragile sports can be. He missed the entire season and took two years to feel fully recovered.

“I want to prepare for the inevitable,” Frei said.

Acquired by Seattle in December 2013, he’s likely five years from stepping away. The Sounders also have no plans to let go of their keeper.

Frei has passed Hall of Fame goalkeeper Kasey Keller in nearly every club record and had his best season last year with a career-high 1.03 goals against average and 114 saves.

“When I retire, no one is going to care,” he said of business contacts. “These relationships have to be established and nurtured because I’d love to design shoes or (keeper) gloves; my style can be used in clothing. So, I want to be practical about it. I’m not scared about transitioning. I’m scared to transition into something I don’t want to do.”

The signal to Frei’s wife, Jennifer, that her husband’s painting was no longer a hobby was when the couple listed its South Lake Union loft in 2018. Frei had been painting from the kitchen and stumbling over their two dogs.

Finding an art space to create his own vision was limiting and expensive, so Jennifer headed the search for a home that fit a studio for her husband. Initially Frei, who’s earning $337,500 this season, opposed the idea of townhouses because of the stairs. But when Jennifer found one in Queen Anne – with bathrooms on every floor – he was in love.

An interior designer cleared out the bottom floor’s previous living room layout with a faux fireplace to pristine white walls. Street-facing floor to ceiling windows and discrete stairways to levels with a kitchen and bedrooms gave Frei the idea of a home showing – once he reaches that point.

Frei’s early dabbles into his second passion have turned into a more professional portfolio of collaborations with Washington Federal, Air Canada, Delta and the Sounders to produce paintings and graphic designs for items ranging from credit cards to posters.

The past year has been filled with experimenting with his craft, developing his “S24F” logo, which are his initials and jersey number, and hiring a company to help build his brand and website. Oh, and playing soccer.

“It’s all happening really quickly,” Frei said. “It’s super exciting because it was frustrating to work and not have anything to show for it. Now I finally have something.”

It’s difficult for Frei to pinpoint how he found his artistic talent.

Geometric shapes and angles are his inspiration and a constant theme in his abstract works. Those sharp lines can trace back to the beginning of his exposure to art in joining his father on trips as a kid to Tuscany to watch him and a group of artists paint the Italian countryside in watercolors.

The next point was as a teenager, when Frei would stare out train windows as he crisscrossed in Switzerland from his hometown of Altstätten northwest to St. Gallen for soccer training and school, struck by pops of color in rusted stations that he mimicked graffiti-style in notepads. Currently, an inspiration is the all-glass F5 Tower on Fifth Avenue in Seattle with its jutted point on one side that gives the illusion of a captivating triangle.

Frei is self-taught, even pulling tips from YouTube, to evolve his technique to create his abstract paintings. Sometimes, he’ll spend a day drawing on a pen tablet and not even save the work.

“I just needed that outlet, getting lost in a different world and forgetting about everything else,” he said.

Frei completed his first piece, “Genesis,” in 2018. With hues of purple, the imagery conjures an escape into a starry midnight sky beneath shattered glass. However, it’s not for sale.

The “A” series is made of three paintings, beginning the chronological line of work Frei will show for purchase. Vibrant oranges and blues are the backdrop of geometric lines of varying widths.

“‘Am I good?’ is the question you wrestle with a lot,” Frei said of the vulnerability in thinking his art’s feedback is positive because he’s a star athlete.

Though art is subjective, Frei does have a mentor who has an eye for quality: Sounders co-owner Adrian Hanauer. Art museums are a second home for the Mercer Island native Hanauer, having wandered their colorful halls around the globe since his youth.

Among Hanauer’s many businesses is a chain of picture-framing stores in the Seattle area the past 30 years, which has provided intimate interaction with dozens of artists. Frei has a trait Hanauer, as a collector, is familiar with in spotting emerging artists.

And he’s already calling dibs on Frei’s first piece to be sold at a showing.

“I’m willing to be second, behind his mother,” Hanauer said without a hint of banter. “I’ve seen the dedication to his craft on the art side, similar to his dedication on being a goalkeeper. Some people think you either have it or you don’t. But people work at it to be real amazing artists, and Stef will do that.”

But Frei isn’t the first athlete-to-artist Seattle has helped birth.

Desmond Mason, who was drafted by the Sonics in 2000, used fleeting dry days in the region’s rainy weather to paint on his back porch and created most of his work for his first showing in 2004 from his garage. Mason walked away from basketball – including a one-year, $1.18 million contract with the Sacramento Kings – after five games in 2009 to dedicate himself to his talent as an abstract expressionist.

Mason, 41, is now in his sixth year showing at Art Basel in Miami, has collaborated to have his work displayed on champagne bottles to yoga pants and recently returned from Paris, where he commissioned a piece for Maroon 5 lead singer Adam Levine.

“The art world doesn’t care about sports, the quicker you learn that, the better off you’ll be,” said Mason, who’s based in Oklahoma where he starred for Oklahoma State. “And it definitely takes some time for you to get to a point where you really feel like you’ve stepped into the art world and it becomes monetarily lucrative. But it’s worth it all. If you have to work for it and there’s success behind it, you can appreciate the journey a little bit better as opposed to walking in and someone is handing you something.”

Frei’s bearded face beams a bright smile when thinking about following a path like Mason’s.

“You’ve got to think big and just try it,” he said.