Those cheers you heard if you were walking down 36th Ave. in Fremont? It was only about 10% joy.

Yes, the patrons at The George and Dragon Pub were pumped that the biggest sporting event in the world is coming to Seattle, but that other 90% — that was relief.

All the logic in the world couldn’t provide comfort to the soccer diehards whose every emotion hung on Thursday’s announcement. All the predictions from pundits were irrelevant to those who had convinced themselves that they were about to be spurned. 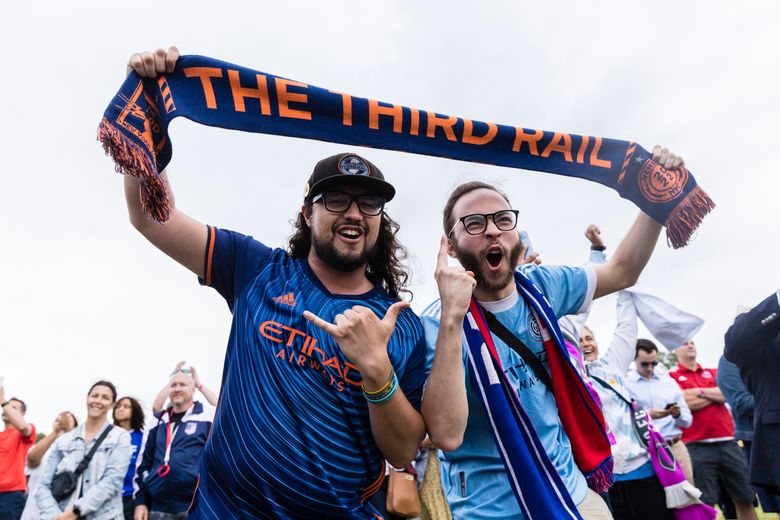 But when it became official — when FIFA revealed on Fox Sports 1 that Seattle would be among the host cities for the men’s 2026 World Cup — the Emerald City’s premier soccer bar screamed as if their team had just scored the equalizer in the 90th minute.

“I was very nervous, but now I’m very excited. It was a big weight dropping off my shoulders. It’s really nice that it’s coming to Seattle. It’s something I’ve been waiting for for most of my life,” said Dan Pagard, co-owner of the George and Dragon. “It’s gonna be great in so many ways. People are going to come to Seattle when they never even thought they were going to visit because of the World Cup. They’re going to fall in love with the city and tell all their friends about it.”

Before the 16 host cities — which include three in Mexico and two in Canada — were revealed, FS1 broadcaster and former U.S. Men’s National Team defender Alexi Lalas gushed about the inimitable experience that is the World Cup. He told his broadcasting partner that the tournament “changes countries, changes cultures and changes cities.”

It’s possible that, aside from the Olympics, no event can highlight a metropolis quite like the World Cup. And unlike Los Angeles or New York, Seattle hasn’t had its international close-up.

The revenue is one thing. Visit Seattle’s early — very early — estimate is that the World Cup will bring between $90-100 million into the 206. But more than that, there’s the worldwide exposure.

Regardless of which national teams will compete here, or how many games Seattle will host, there could be upward of a billion eyeballs zeroed in on this town. They’ll see the waterfront, they’ll see the greenery, and as much as anything, they’ll see that the Puget Sound region’s passion for the beautiful game is up to the international standard.

“I think it’s going to show folks that we really are a soccer town,” longtime Seattle resident Charlie Crawford said from his seat at the George and Dragon.

His wife, Patti, was a bit pithier.

“This city is going to lose its mind,” she said.

Sounders coach Brian Schmetzer echoed Patti’s prediction while standing on Pier 62 a couple hours after the announcement. That was the epicenter of Thursday’s celebration, where Washington Gov. Jay Inlsee, Seattle Mayor Bruce Harrell and Sounders owner Adrian Hanauer, among others, addressed the public.

Schmetzer called his experience watching World Cup games in California 28 years ago “life changing.” And he knows the magnitude of the event mixed with the energy of Seattle can spawn an ambience unlike anything this town has ever seen.

A couple minutes later, a reporter pointed out the picturesque weather Seattle was enjoying Thursday afternoon and asked Schmetzer “how perfect” it would be to have a World Cup game played in similar circumstances.

“It’s gonna be better than perfect,” he said.

It took a lot of manpower and energy to make this happen. Politicians, investors and other power brokers all played their role in solidifying Seattle as a 2026 World Cup host city. But as much as anything, it was the citizens of this town.

Last month, nearly 69,000 people poured into Lumen Field to watch the Sounders claim the CONCACAF Champions League title against the Mexico City-based Pumas. If FIFA was 99% sure Seattle was worthy of the World Cup before that match, it was 990% sure afterward.

No doubt Seattle can be a fair-weather sports town. But few cities match its fervor when the stakes are at their highest.

So rest assured Hanauer was speaking for all of the Emerald City when he grabbed the mic on the waterfront Thursday, beamed at the crowd and said — “we did it.”