The oddest part about the historic moment the Sounders FC crafted Wednesday is how misunderstood the CONCACAF Champions League title is when it comes to its place in the sports landscape.

“It’s unique for American sports,” Sounders majority owner Adrian Hanauer said. “There’s nothing like it. It’s complicated, but I think it’s super cool. This idea that is going on all over the world, in South America with Copa Libertadores, in Europe and Africa and Asia. I’m hopeful that over time, our fans will actually grow to appreciate it and understand it and embrace it the way we soccer nerds have.”

Sounders striker Raul Ruidiaz’s brace led the club to a 3-0 win against Pumas UNAM in the second leg of the CCL final at Lumen Field on Wednesday. The 5-2 aggregate scoring, after a 2-2 draw in the opening leg last week in Mexico City, was enough to crown Seattle the 2022 regional champion — a first for the Sounders and an MLS team since the tournament was revamped to its current format in 2008.

Seattle being the history maker for the U.S. could be the best-case scenario for soccer’s growth in America. The Sounders have enough proven success and likable aspects to carry the sport forward.

CONCACAF CEO Philippe Moggio’s mission is to cultivate “sustainable long-term growth of football in this region.” 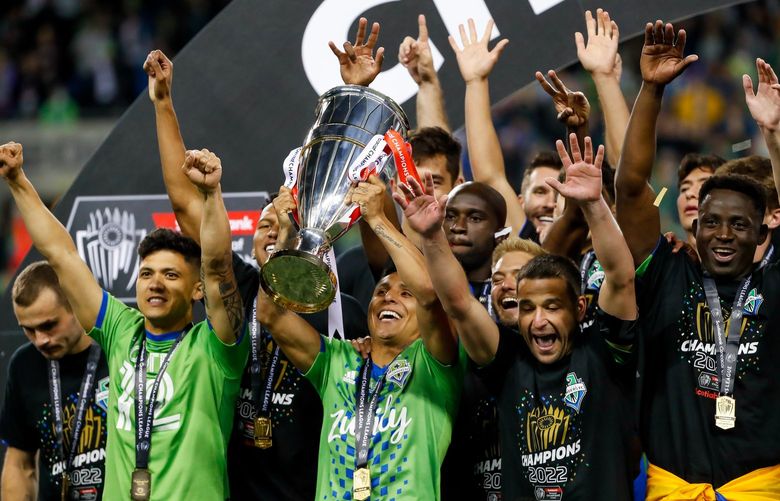 For that to happen, not only does the quality on the field have to be superior across the region, even the casual soccer fan must know the hierarchy of the sport. For example, no one in the U.S. would equate the Super Bowl with the Fiesta Bowl even though they’re both bowls.

“We’re very excited for how this competition has progressed,” Moggio said, noting the CCL will expand from 16 teams to 27 next year. “In order to grow that, we need to continue to grow our competitions, grow our fan bases and grow our commercial programs.

“To have a growing club competition that is running every year and ensuring that the teams that are participating understand the importance of this competition, that it provides a path to qualify for the FIFA Club World Cup, that has helped us really continue to raise the visibility.”

With all the cups and tournaments, it can be difficult to realize the significance of each. There’s the Heritage Cup awarded only between the San Jose Earthquakes and Sounders dating back to 1974 when both were part of the disbanded North American Soccer League (NASL). The Cascadia Cup is given by supporters’ groups for Pacific Northwest clubs Vancouver Whitecaps FC, Portland Timbers and the Sounders. The next tier in the trophy case is the amateur U.S. Open Cup then MLS Cup.

A rung up the ladder for a club in this region is the Champions League title, which grants a berth to the FIFA Club World Cup — the highest any club in the world can go.

“We’re going to play Real Madrid or Liverpool in a real game,” a euphoric Garth Lagerwey, the Sounders president of soccer and general manager, told reporters Wednesday. “This is what you do it for. It’s amazing; it just is. I’d love to be real cool and calm and be like, ‘ah, it’s no big deal,’ but it’s a big deal. … I want to make this (MLS) one of the best leagues in the world and if we can do that, we can play meaningful games against these teams.”

FIFA announced plans in 2019 to expand the Club World Cup single-elimination format to 24 teams, including the host nation, and play in China the summer of 2021. The pandemic scrapped the debut of a revised tournament but possibly not the concept.

According to recent reporting from The New York Times and Sporting News, the global governing body hasn’t made any decisions regarding whether or when the 2022 champions from the traditional six confederations would play each other for the trophy.

“No clue,” is what a text message to The New York Times read regarding the Sounders’ Club World Cup future.

Sounders qualified for Club World Cup. No one knows when it is.

If there are bets to be made about the prestigious tourney, put money on Lagerwey trying and succeeding to force some version to happen — even if Seattle must host the event. That would be a letdown because not only would hosting technically make the Sounders a possible automatic qualifier anyway, the lure of breaking into this posh party is international travel to play against the world’s heavyweights.

The event would still be a spectacular show given the teams would surely play their stars the bulk of the 90 minutes (Lionel Messi was subbed off in the 46th minute when he scored a brace for Barcelona in the 4-0 shutout against the Sounders). But the Sounders organization providing the total experience of a massive global tournament it’s never participated in is unrealistic. The Club World Cup will already be used to prepare for the 2026 FIFA men’s World Cup, should Seattle be named a host city.

Hanauer doesn’t know when FIFA will announce the cities for the 2026 World Cup in the U.S., Mexico and Canada. There were multiple representatives at Wednesday’s CCL match.

“What we assume is the decision is coming in weeks to weeks; that could be 100 weeks or that could be four weeks,” Hanauer said. “We want the World Cup in Seattle. We really do and we think that we’re very well positioned to do it and our fans (Wednesday) put an exclamation point on that.”

The Sounders plan to raise a CCL banner in the Lumen Field rafters on July 9 when the team hosts Portland.

The crushing loss Wednesday was Sounders midfielder Joao Paulo suffering what is believed to be a torn right ACL in the opening half against Pumas. The possible season-ending injury would make the team’s goal to also win the MLS Cup much more difficult.

The Brazilian was an MVP finalist last season. He recently received his U.S. green card, so he could remain in Seattle with his young family while rehabilitating the injury like forward Jordan Morris did last year.

FIFA’s transfer window is closed. Sounders midfielder Jordy Delem rejoined full training in March from an ACL tear and a decision needs to be made whether he’ll be signed or not. He plays the same position as Joao Paulo.

Sounders left back Nouhou suffered a thigh bruise, which coach Brian Schmetzer didn’t regard as concerning. Seattle returns to MLS play with a road game against FC Dallas on Saturday and the first-choice starters weren’t expected to play due to the quick turnaround.