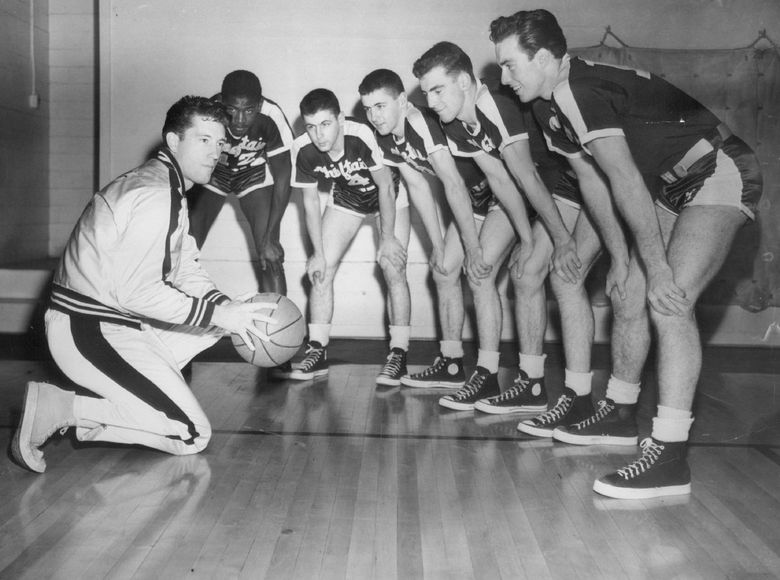 Al Brightman turned Seattle U into a national power in men's basketball in the 1950s, and at 32 was on his way to becoming one of the game's greatest coaches. Then came two altercations with John Wooden that changed everything.

Al Brightman was as big as it got in Seattle sports in the 1950s.

He was a big man with a big personality, loved by players, fans and the media.

He turned Seattle U into a national powerhouse, helped bring down the Harlem Globetrotters, and with 180 coaching victories at age 32, the possibilities seemed endless.

And suddenly, he was gone.

“He could have been like John Wooden,” said Johnny O’Brien, the Seattle University basketball legend about his former coach.

That is true, and it’s coincidental.

That’s because three days after a pair of confrontations with Wooden, during and after a 1956 NCAA tournament game, Brightman shocked Seattle.

“Brightman resigns as Seattle U coach” was the huge headline at the top of the A section in The Seattle Times.

Johnny and Eddie O’Brien, the dual-sport twins who took this city by storm

Storytelling with Johnny O'Brien: It doesn't get much better than this

Brightman told the newspaper he had pondered resigning for a month and was going to coach a semi-pro baseball team in Canada. No one really believed him. Why would a 32-year-old coach, at the top of his game and with superstar Elgin Baylor eligible to play the following season, suddenly quit?”

More than 60 years went by without an explanation. It finally came in Baylor’s autobiography, “Hang Time,” released last year. It was no secret Brightman liked to drink, and Baylor wrote that Brightman was drunk during an NCAA tournament game against UCLA and was forced to resign.

“I wish (Baylor) wouldn’t have said that,” said Jim Harney, who played two seasons for Brightman, who died in 1992 at the age of 68 from pancreatic cancer.

Harney had hoped the details of that UCLA game would remain a secret.

“I would have run through a wall for Al Brightman,” he said. “I adored him. But it’s all true. Every bit of it.”

Oh, what could have been. Seattle U, coached by John Castellani, lost to Kentucky in the NCAA title game two years later. Harney and several teammates are certain they would have won had Brightman still been coaching.

The man who rarely lost competitions had a harder time conquering alcohol.

“It’s sad, but it’s how he was,” said Harney. “He was the ultimate competitor. I think he had a competition within himself to a certain extent, and alcohol was his undoing.”

The rise and the fall

Brightman was 24 with an already impressive resume, when he was hired by Seattle U in 1948 to coach baseball and basketball.

He was an all-state basketball and baseball player at Wilson High in Long Beach, Calif., then averaged 25 points for Morris Harvey College before joining the Navy during World War II.

After the war, Brightman might have played professional baseball, as he was the top catching prospect in the Cleveland Indians organization. He suffered a shoulder injury throwing balls from home plate over the outfield fences.

His baseball career derailed, he joined the first Boston Celtics team in 1946, finishing second on the team in scoring and becoming the first Celtic to score 20 points in a game.

He left the Celtics after a season to become player/coach of the Seattle Athletics in the Pacific Coast Professional Basketball League. When that league went defunct in 1948, Seattle U hired him.

Brightman was good at seemingly everything.

Son Ed, one of Al’s seven children, said his father was a Junior Davis Cup tennis player in California and a state swimming champion in Hawaii.

He was also smart.

“He quoted Shakespeare and he could nail ‘Jeopardy’ even with a little bourbon in him and not miss a question,” Ed Brightman said. “He was charming and intelligent, but obviously, when he was drinking, it could be a little different. But even then he was funny.”

But Al’s greatest gift may have been coaching. He recognized talent and got the best out of his players. He signed the 5-foot-9 O’Brien twins, Johnny and Eddie, after playing against them in the national semi-pro baseball tournament.

The three helped turned Seattle U into a nationally recognized program.

Brightman’s baseball teams were successful, but it was basketball that put the school on the sporting map. Brightman was ahead of his time, eschewing the methodical pace used by most teams, and having his team play at an ultra-fast tempo.

In 1952, Seattle U went to Madison Square Garden and defeated New York University 102-100, the first college game in which each team scored at least 100 points.

“Brightman wouldn’t let us call timeouts,” Johnny O’Brien said recently. “He said, ‘We’re going to run other teams out of the building.’ And we never had a scouting report. He did his scouting reports two minutes into the game.”

Brightman’s best move was his most unorthodox. Early in Johnny O’Brien’s career, Seattle U was losing at halftime to Western Washington, and Brightman moved Johnny to center, where he faced players much taller.

“We outscored them 60-17 in the second half and I scored 27 points,” said Johnny, a three-time All-American and the first college player to score 1,000 points in a season. “I was a center from that point on.”

Marveled Harney: “How did Brightman know to put Johnny O’Brien in the post?”

Perhaps Brightman’s greatest victory came in 1952 when the Chieftains (now the Redhawks) defeated the Harlem Globetrotters 84-81 with Johnny O’Brien scoring 43 points. It ranks among the great games in Seattle sports history.

“Brightman said, ‘We can beat them, and I’ll tell you how,’” Johnny O’Brien said. “He said they play a strict man to man, never a zone, so it’s going to be easy to get the ball inside to the worm – he called me the worm – and once that happens, we’re in business. That’s exactly what happened.”

At 29, Brightman became the youngest collegiate coach to get 100 wins. The next 80 came at an even faster pace.

Seattle U was playing in its fourth consecutive NCAA tournament in 1956, but lost its opener to Utah. In those days, there were consolation games, and Seattle U then played UCLA in a game that meant little.

Brightman, apparently inebriated, benched two of his best players, Dick Stricklin and Cal Bauer, for not being tough enough against Utah. Harney started for Bauer and was to guard UCLA star Morris Taft.

“He says to me, ‘When Taft goes up on the jump shot, you hit him in the stomach as hard as you can hit him, and if you don’t, I’ll be watching and you’ll be coming out,’ ” Harney said, telling the story reluctantly because of his love for Brightman. “We were brawling in that game from the start. We were running through the wall for him. Then, about three-fourths of the way through the game, we got into a fight, and I remember Brightman had Wooden by the lapel.”

The Seattle Times wrote that, “It will go down in the annals as one of the roughest games in history.” After the game, according to the Seattle P-I, Brightman tried to pick a fight with Wooden.

It was a terrible end to the season. But with Baylor, who became one of the greatest players in basketball history, eligible the next season, the future was bright. Then, a couple of days later, Brightman was clearing out his Seattle U office for good.

“He just couldn’t handle booze,” Johnny O’Brien said. “After a few beers he was ready to fight the house. He was the toughest guy in the building drunk or sober.”

Said Ed Brightman: “The consensus in the family seems to be that dad had too much success, a growing family and growing demands too soon and didn’t really know how to handle it.”

Brightman’s magnanimous personality and famous connections made it easy to find jobs.

“(Tarkanian) said he paid to watch Al coach, not to watch the game,” said Ed Brightman, 61, who played baseball for a season at Seattle U.

Immediately after leaving Seattle U, Al Brightman became a local TV celebrity, doing everything from giving sports reports to preparing his favorite recipes. He moved to the L.A. area where he sold cars, got a degree in English at Long Beach State, and became a high school teacher and coach for several years.

He also coached in the American Basketball League before it went defunct in 1962, then spent a half season coaching the Anaheim Amigos in the ABA in 1967.

He spent most of the final two decades of his life managing apartments in Oregon and died on June 10, 1992 in Portland.

In 2008, Seattle University inducted Brightman into its Hall of Fame. For those who played for him, it should have been sooner.

“I just thought Brightman was the greatest,” Harney said. “You would run through a wall for him because of his personality, his competitiveness and his congeniality. I can’t say enough about him. He has had a fabulous impact on my life.”

O’Brien recently pondered the irony that Brightman could have had a career like Wooden, who won the first of his 10 NCAA titles eight years after his altercations with Brightman.

“I think Brightman deserves more credit than was ever afforded to him,” said Johnny O’Brien. “Maybe that’s because he got in a scuffle with a legend. But Brightman was the guy who put it together (at Seattle U). He was a marvelous guy. I might not have jumped off a bridge for him, but I would see how high it was.

“He was a dominating, positive influence on the people he worked with. That’s about the best way I can describe him.”