“The Last Dance,” ESPN’s 10-part documentary series on the career of Michael Jordan, is undeniably riveting television, a fascinating peek into the forces that drove him to become maybe the greatest player in NBA history.

But trying to fully cover that much ground in depth isn’t easy.

And one of the attention-getting story lines from Episode 8 on Sunday night — that Sonics coach George Karl erred by not having Gary Payton guard Jordan until Game 4 of the 1996 NBA Finals — is a little more complicated than “The Last Dance” (and Payton) made it appear. 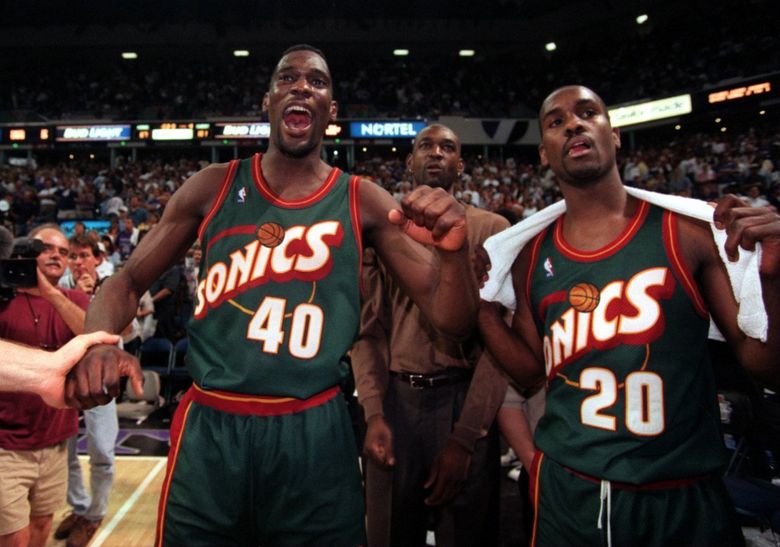 True, the Sonics were down 3-0 at the time of the switch and then won the next two games in Seattle to send the series back to Chicago, where the Bulls clinched in six.

And true, even Karl wishes he’d made the switch earlier, telling The Times in a 2016 interview about that season and the series against the Bulls, that “in hindsight I would put Gary on Michael from the very beginning.”

So why didn’t he?

“The Last Dance’s” hold on a sports-starved public during the coronavirus pandemic makes it a topic worth exploring again, 24 years after the fact.

Karl had reasons that make sense within the context of the season. The prevailing social-media reaction Sunday night was that Karl just botched it entirely (to put it nicely).

Payton was dealing with a calf injury that had bothered him in the Western Conference finals against the Jazz. And maybe more important, Nate McMillan was battling a back injury that limited him to six minutes in Game 1 and kept him out of the next two games.

Payton was the reigning NBA Defensive Player of the Year, which raises the question of why not just let him try.

But McMillan’s absence meant Payton would have to handle nearly all the ball-handling duties, and Karl worried about Payton getting tired and in foul trouble if he had to defend Jordan full time.

So, Karl instead had Hersey Hawkins take the primary duty of guarding Jordan the first three games — and it’s worth remembering Seattle lost Game 2 by just four points, 92-88, with Jordan shooting 9 for 22 and saying afterward, “I need to play better.”

Karl said that “in hindsight I shouldn’t have worried about foul trouble” and said the basic plan was that “we thought we were going to put Gary on Michael at the end of games and let him rest during the game, and we finally decided to put Gary on Michael (for Game 4), and we probably should have done that earlier.”

But what also happened in Game 4 is that McMillan returned, playing 14 minutes as Seattle won 107-86 with Jordan shooting 6 for 19 for 21 points.

McMillan also played 21 minutes in Seattle’s 89-78 victory in Game 5, a contest in which Jordan wasn’t really the reason the Bulls lost as he scored 26 points on 11-for-22 shooting. More problematic for Chicago in that game was starting guard Ron Harper playing just one minute due to a knee injury and Scottie Pippen shooting 5 for 20 (he shot 4 for 17 in Game 4).

“Somebody told me that Nate played 10 quarters in that series and we won nine of the quarters,” Karl said in 2016. “I don’t know if that’s true or not, but I know he played Game 4 and Game 5, and some of Game 6 and those are the games that, of course, we won and in Game 6 we played a pretty damn good game but lost in the last three to four minutes.”

They were victories that not only allowed the Sonics to avoid being swept but also put a far more fitting coda on a season in which the team had the best regular-season record in the franchise’s 41 years in Seattle.

Payton moving onto Jordan undoubtedly was significant in the victories.

But most observers felt Seattle’s defense simply worked better with McMillan back. It returned everyone, including Payton, to more comfortable roles in a trapping scheme that required intricate teamwork. Grantland.com once called Karl’s defense “an aggressive style of trapping, chaotic defense that was ahead of its time.”

McMillan played just 55 games that season because of injuries, but Seattle went 46-9 in those contests for a 64-18 overall record. McMillan also had the best “defensive box plus/minus” number for Seattle that year at 4.2, per BasketballReference.com, a stat that is an estimate of how many points per 100 possessions a player is above league average. It was the third-best in the NBA that season. Payton was at 1.8.

“Nate,” Payton was quoted after Game 4 when asked what was the biggest difference. “Nate McMillan.”

Heart and soul back

In a 2016 interview with The Times, McMillan explained how his absence impacted the team in the Finals: “If I was in the game, Gary moved to the two so he didn’t have to handle the ball. I would play point guard on offense, Gary would play two on offense, then Gary would play two on defense and I would guard the one on defense. Without me being in there it forced Gary to have to play with the ball the entire series. And we couldn’t trap.

Or, as radio/TV analyst Marques Johnson put it: “Gary was the heart of the team, Nate was the soul of the team. Defensively he was kind of a quarterback, a coach on the floor. … In that series, his leadership, Gary kind of fed off that. Nate would get Gary fired up and get in his ear when Gary wasn’t playing hard and cuss him out and they would cuss each other out and then going back and forth, and that was the dynamic that these guys really fed on.”

Another Sonics personnel shift also got significant attention at the time as contributing to Seattle winning Games 4 and 5 — Frank Brickowski replacing Ervin Johnson at center.

After the Bulls won the first two in Chicago the series shifted to Seattle for Game 3, which was as anticipated as any basketball game in the city’s history.

But the air was sucked out of KeyArena almost immediately as the Bulls roared to a 19-4 lead, powered by center Luc Longley, finished with 19 points.

Johnson started the game matched up on Longley but was taken out after three minutes and replaced by Brickowski — and amazingly enough Johnson would never play for the Sonics again. He was relegated to the bench for the rest of the series (he had started 60 games during the regular season and every game in the playoffs) and signed with Denver as a free agent in the offseason.

“It was probably two games too late,” Karl said of the Brickowski-Johnson switch, which added a measure of toughness the team lacked in the first three games (Brickowski, who had a running feud with Dennis Rodman throughout the series, was ejected from both Games 1 and 3).

“That might have been a mistake by me. We should have been aware that this team with Rodman and the personality that they played with, this might not be a game for Ervin and instead of giving Ervin those 15-20 minutes we were giving maybe we should have given them to Frank from the very beginning and split everything between him and Sam (Perkins).”

But maybe nothing Karl did really would have mattered.

Jordan also said in “The Last Dance” he wanted to stick it to Karl because Karl didn’t say hello to him when the two saw each other at a Chicago restaurant before the series — both attended North Carolina and had a relationship for years.

In an ESPN interview Sunday night after “The Last Dance,” Karl admitted that happened but noted — undoubtedly accurately — that if that hadn’t happened Jordan would have probably just found something else to motivate him.

“That was his M.O. most of his career,” Karl told ESPN’s Scott Van Pelt. “At the end of his career he was making up stuff. He made things up to motivate himself to reach a level of intensity that very few players ever got to.”

More relevant than what happened at dinner is whether Payton could have limited Jordan just enough to make it more of a series.

“I wish I could have did it earlier,” Payton said in “The Last Dance” of guarding Jordan. “I don’t know if the outcome would’ve been any different, but it was a difference me guarding him and beating him down a little bit.’’

If you watched, you know Jordan didn’t think much of that theory.

“I had no problem with The Glove,” Jordan said, laughing after being shown Payton’s comments.

Jordan also could have pointed to the first meeting the next season, a contest that pretty much encapsulated everything “The Last Dance” is trying to portray.

In a much-hyped February game at KeyArena, Jordan scored almost half of Chicago’s points — 45 — in a 91-84 Bulls victory in which he was guarded primarily by Payton.

Though the Jordan-Payton rematch got the bulk of the pregame attention, it was Karl that Jordan was again mad at, miffed that the Sonics coach had suggested that Jordan wasn’t driving into the paint as often as he had in the past to try to save wear and tear on his body.

“If he wants me to drive more he should open up the lane instead of double- or triple-teaming me,” Jordan said afterward.

Replied a befuddled Karl: “If I motivated Michael Jordan, I’m disappointed. I don’t know that I’ve ever said anything negative about him. All I said was that he’s taking more jump shots.”