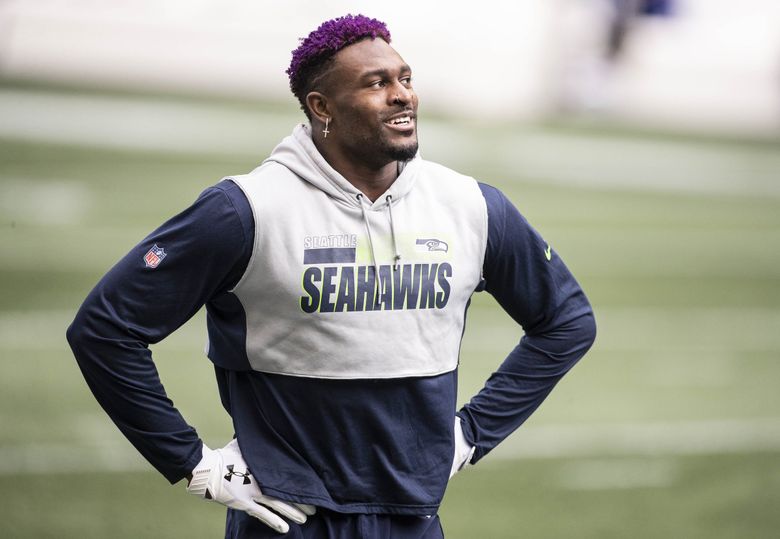 'Why y’all wait this long?' The Seahawks know they were fortunate to draft DK Metcalf, and the feeling is mutual

DK Metcalf warms up for the Seahawks’ game with the New York Giants on Sunday, Dec. 6, 2020, at Lumen Field in Seattle. (Dean Rutz / The Seattle Times)

There was a little luck involved, sure. Seahawks general manager John Schneider acknowledges that now, more than a year and a half later. Actually, the word Schneider uses is blessed — as in, the Seahawks were blessed to grab DK Metcalf when they did, at the very end of the second round of the 2019 NFL draft.

“We were just blessed that he lasted — I don’t want to say that long,” Schneider says, “because he frickin’ hates that.”

The Seahawks’ good fortune is obvious to anyone who has paid even casual attention to the team since the start of the 2019 season: Metcalf is a star. He’s a frickin’ megastar. He’s the most physically gifted wide receiver the Seahawks have had — with all due respect to Hall of Famer Steve Largent — and as talented and entertaining as any receiver in the NFL today.

So, yes, Schneider was blessed to select DeKaylin Zecharius Metcalf with the 64th overall pick in 2019, after 31 teams had a chance to draft him. They all had their chance, and they passed. Schneider, actually, had earlier opportunities to draft Metcalf — and he passed, twice.

How did Metcalf last that long? And how did Schneider manage to trade back into the second round to finally draft the receiver out of Mississippi?

Metcalf famously asked the first question when Schneider called and told him he was going to play for the Seahawks. Metcalf, sitting on a couch at his family’s home in Oxford, Mississippi, surrounded by family and friends, was wearing a white T-shirt with the words SHOULD HAVE NEVER PASSED in red block letters. Metcalf and his younger siblings had the shirts made that day.

(Loud sobbing on the other end.)

Metcalf: “How you doing?”

Carroll: “I know. I know you had to wait a little bit, but that doesn’t matter — you’re coming to Seattle, man. You’re gonna play with the Seahawks, and you’re going to catch footballs from Russell Wilson. So get your ass ready to go, big fella. We are fired up for it.”

Metcalf: “Thank you. Thank you.”

In the buildup to the draft, Metcalf had what Schneider called an “incredible, incredible” workout at the NFL combine. Metcalf measured 6-feet-3 3/8 inches and 229 pounds with a wingspan of 6-11. He ran the 40-yard dash in 4.33 seconds and bench-pressed 225 pounds 27 times — measurables that are practically unheard of for a wide receiver. They’re really, almost, unbelievable.

What made his combine performance even more remarkable was that it happened just three and a half months after he’d had surgery to repair a broken neck, an injury that had prematurely ended his college career at Ole Miss in October 2018 and briefly threatened to end his football career for good.

The injury at least partially explains why NFL executives were reluctant to take a flier on Metcalf in the first round, why so many of them were willing to draft eight — eight! — wide receivers before him. There was also the matter of his infamous three-cone time — 7.38 seconds, after he had slipped — which put him on par with a typical offensive lineman. In hindsight, the hubbub over the three-cone is the apex of silliness in the over-analysis of Metcalf’s prospects.

To answer his question about why he fell as far as he did, Metcalf later relayed another conversation he’d had with Carroll. The coach offered perhaps the best theory for Metcalf’s fall: People just thought you were too good to be true, Carroll told him.

Revisiting the ’19 draft from his perspective, Schneider offers some context and a philosophical explainer. Two days before the draft, Schneider had completed a blockbuster trade that sent defensive end Frank Clark to Kansas City for a 2019 first-round pick and a 2020 second-round pick, a deal that shaped the Seahawks’ draft priorities.

“We knew we were not going to be able to get a long-term deal done with Frank Clark,” Schneider said. “So making that trade and then working off of that — and knowing that you don’t necessarily want to draft for need, it ends up happening to a certain extent.”

In other words, the Seahawks needed an edge rusher, and there were “a couple” Schneider was eyeing with his first selection. That pick, at No. 29, ended up being TCU defensive end L.J. Collier. With their second-round pick the Seahawks took Utah safety Marquise Blair at No. 47. Based on the Seahawks’ evaluations, defensive end and safety were thin positions in the draft, and as such required early action for needy teams at those spots.

“The thing I think a lot of people maybe don’t necessarily understand about the draft is it’s not necessarily who you think is better than who — it’s not ‘this guy versus that guy’ or ‘that guy versus this guy,’ ” Schneider explained. “It’s truly about how you acquire them and where we think we’ll be able to acquire them.”

The ’19 draft was strong at wide receiver — “very strong,” Schneider said. The Seahawks had several receivers graded highly, and Metcalf was “for sure” among those. Schneider uses Wilson — surely the most significant pick he will make for the Seahawks, selecting the franchise quarterback in the third round in 2012 — as a comparison to Metcalf’s situation.

“The best example of that is Russell, right?” Schneider said. “You know, where do you take a 5-11 quarterback? What does history look like? And what are you hearing around the league?”

Soon after taking Blair, Schneider said he began trying to trade back into the second round to get a receiver — acknowledging that trading up in the draft is something he’s rarely comfortable doing. But in this case he knew what he wanted, and he found a willing trade partner: New England. Schneider agreed to send a third-round pick (77) and a fourth (118) to the Patriots for pick No. 64.

“We were able to work out a deal fairly quickly,” Schneider said.

Of course, no one could have predicted what Metcalf would achieve this early in his NFL career; if anyone had an inkling, he would not have lasted until the end of the second round.

Metcalf is redefining unbelievable. Where his raw talent was once too good to believe, he made everyone almost instantly believe in his potential upon arriving in Seattle.

“Much like a guy like Russell Wilson, DK has that self-efficacy that’s off the charts,” Schneider said. “It’s his work ethic and his passion, and you can tell how important the game is to him. … He’s been a stud since the day he walked in the door here.”

Terrence Metcalf knew right away that his son had landed in an ideal scenario in Seattle, on an established team with a veteran quarterback. That feeling is confirmed when he puts on his son’s No. 14 jersey to watch the Seahawks play each week.

His son has come to that realization, too.

“I wasn’t supposed to go in the first round for a reason, probably because I wasn’t going to work as hard if I got drafted in the first round or early in the second round,” DK Metcalf said this season. “It allowed me to come in here with a chip on my shoulder and just to realize what it felt like to be an underdog in the NFL. I don’t think it would have affected my approach to the game but probably my approach to life. I probably would have taken this opportunity for granted. It was just a blessing in disguise. God put me in this position. He made me wait until the 64th pick, just to be placed in this organization.”

Terrence was an All-American offensive lineman at Ole Miss and played seven seasons with the Chicago Bears from 2002-08. For him there is a strong correlation between a team’s success and the closeness of its players; camaraderie is vital, and he recognizes that with Wilson and the Seahawks’ receivers.

Wilson has taken on the role of big brother to DK Metcalf, and Wilson believed in Metcalf as much as anyone early on. After just two training-camp practices last year, Wilson declared that the rookie receiver had the potential to be “a Hall of Fame-type player.” What sounded like hyperbole might turn out to be prescient.

It’s easy to get carried away daydreaming about what a long-term success Wilson to Metcalf could look like. Wilson has taken that sentiment to another extreme, saying he wants to build a legacy with Metcalf that becomes synonymous with Joe Montana and Jerry Rice. And Wilson has said he wants to break the Peyton Manning-to-Marvin Harrison record for quarterback-to-receiver touchdown passes of 114.

Metcalf turned 23 on Monday, a day after catching his 10th touchdown reception of the season from Wilson in a victory over the New York Jets. He’s young and yet he’s so unlike anything else in the NFL — a “One of One” tattoo is sprawled across his abdomen — and it’s as if he is still that 8-year-old Pee Wee player who is so much bigger and stronger than everyone else that the other parents demand to see his birth certificate before the start of every game.

Metcalf has 17 touchdown receptions in 29 NFL games, and he ranks second in the NFL this season with 1,180 receiving yards. Unofficially, he must be leading the league in tussles with opposing defensive backs. He seems to relish the fight.

“I’m not going to back down from nothing,” he said.

Sure, Terrence said, the draft snub did motivate DK — more so when he was a rookie eager to prove everyone wrong. But it was just a few weeks ago that DK again tortured the Philadelphia Eagles, who had taken another receiver (Stanford’s JJ Arcega-Whiteside) seven picks before Metcalf. He made sure to mention the slight after the game.

“It’s always something special for me to watch him. I don’t care if he has only one or two catches,” Terrence said. “All I’ve ever talked to him about is — you work hard, you treat people right, you trust God, and then things will fall in line for you. And that’s what DeKaylin is. I’ve been asked a lot of question like, ‘Have you ever had a issues (with him)?’ He’s been, to me, that child you always dream about, that child you pray about. God blessed me with a houseful of kids who understand that. So I have no negative anything that I can say about my son, my baby, my boy. I’m just excited, and I really enjoy seeing him doing exactly what (he’s doing), man — and do it the right way.”

DK has unwavering confidence in himself. Terrence buoys that self-belief by regularly sending DK a two-word text message: Be Legendary.

And DK is on his way.

The 2019 NFL draft featured one of the best and deepest classes of wide receivers in recent memory. Eight receivers were selected ahead of DK Metcalf, who went to the Seahawks with the last pick of the second round. Here’s how those receivers stack up in their first two NFL seasons (does not include playoff games):

DK Metcalf has put together one of the most prolific seasons by a Seahawks receiver. He has three regular-season games to break Steve Largent’s 35-year-old franchise record for receiving yards.